By ValleyPatriot on August 6, 2012Comments Off on Hero in Our Midst: Corporal Samuel Blumenfeld

For one born and raised in New York City, mountain warfare in winter was a new experience. But Sam was trained and prepared.

His unit fired 155-mm howitzers to support the Tenth’s second major assault on Germany’s heavily fortified Gothic Line—the last line of defense against the advancing Allied armies. Through accurate, constant, and devastating artillery fire they softened the newly reinforced German lines. As a result, in only two days, by March 5, the 10th Mountain infantry had advanced further northeast beyond the already captured Riva Ridge, Mount Belvedere, and Mount della Torraccia—taking 1,200 prisoners and occupying 35 square miles across a solid line of ridges and mountain crests.

Now they controlled a 120-mile front across the crest of the Apennines to southeast of Bologna. This placed them, and the Allies, in a strategic position for their major spring offensive into the Po Valley.

In April they advanced into the Po Valley and routed the Germans. Germany surrendered May 2, 1945.

This persistent, intensive campaign prepared Sam for another kind of warfare in later years: the culture wars.

The Italian Campaign was one of the hardest fought campaigns of the war. The northern Apennines form an unbroken barrier 140 miles long and 40 miles deep—from the Mediterranean to the Adriatic Sea. Some peaks have crests that rise 7,000 feet high.

The Gothic Line, built on those heights, was embedded with 88-mm Panther gun turrets, steel shelters, bunkers dug into mountainsides, and minefields. The Line stretched east from the Ligurian Sea through Pisa, Florence, and beyond. A fortified stronghold. Forbidding. Formidable. Not easily broken. But through perseverance, it fell.

On April 9, 1945, the U.S. Fifth started its offensive toward the Po Valley through Bologna. From April 13 to 18, the attacks escalated: 2,000 piece artillery barrage, aerial bombing, and intensified ground fighting routed the Germans, and drove the enemy out of Mount Pigna, Mount Mantino, Mount Mosca, Mount Pero, and Reno River Valley. The Americans moved from ridgeline to ridgeline, from valley town to valley town, slowly pushing back the Germans. The enemy fought stubbornly, but could not prevail. By nightfall on April 17, the 10th Mountain Division had broken through what remained of the Germans’ defensive line. Other victories soon followed.

The turning point came the next day, April 20, when the Allies quickly surged forward through the Po Valley’s flat terrain and excellent network of roads. They destroyed surviving enemy forces. It now became a race as to who would reach the Po River first, and the Alpine foothills beyond—the Allies or the Germans.

On April 21, 1945, Bologna fell to the Allies. By dawn on April 22, the entire Fifth Army was in the Po Valley. That same evening, the 10th Mountain reached the Po River at San Benedetto, 30 miles north. By midnight, the rest of the division arrived, and large amphibious DUKWs transported troops across the river. The rapid American advance left many pockets of Axis soldiers, and special task forces mopped up these areas.

By April 24, the entire U.S. Fifth Army front had reached the Po. 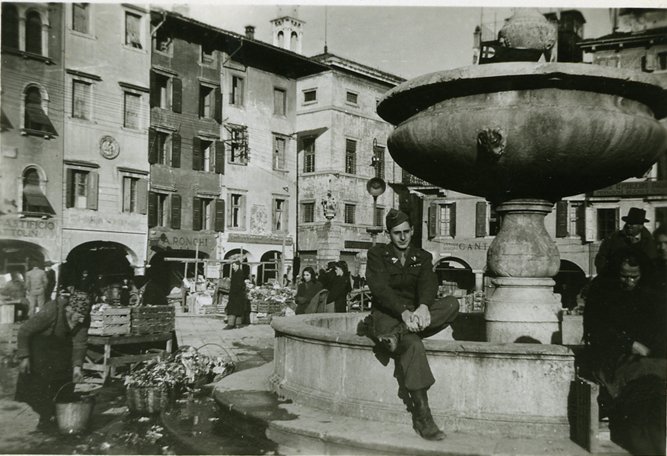 After the war ended, Sam, now a technical corporal, was transferred to an Infantry unit with the Occupation forces in Tarcento, Friuli province, to complete the orderly surrender of German forces, maintain security, and help the Italians begin their postwar reconstruction.

Relations between American troops and native Italians were especially warm and cooperative. But near Trieste and the Yugoslav border, there was great unrest because of border disputes between Italy and Yugoslavia. Stationed in Trieste were troops of Communist dictator Marshall Tito.

The war between good and evil

The long, arduous warfare to rout the enemy from strongholds in the Apennines and Po Valley prepared Sam Blumenfeld for future work in another arena. What was the source of evil? How did it operate? How do you fight it? It led Sam to a decision that transformed his life.

Born of Jewish parents who had left Poland in the 1920s to escape poverty and persecution, Sam was raised in his family’s faith. He was unfamiliar with the English Bible until introduced to it in a New York City public elementary school, where his principal recited the Twenty-Third Psalm at every school assembly.

“These words carried me all through my military service. I felt safe, knowing I was continually protected, that God had a plan for my future. To this day, I sense God’s protection.”

In the 1980s, while during research on public education, Sam began reading the New Testament and became “a follower of Christ the Jewish Messiah, Yeshu’a.” He says: “I believe Christ is Who He says He is, the Son of God. He is The Truth. No one has influenced Western civilization the way Christ has.

Regimes based on lies all crumble and fall: Nazism, Marxism, Communism. But Christianity is based on Jesus Christ, the Truth. Yet we have allowed atheists to take over in the public schools and destroy a child’s belief in the God of the Bible, a moral crime that leads children into atheism, nihilism, and even Satanism. This can result in self-destructive, murderous behavior.”

Today Sam Blumenfeld has the courage and boldness to stand in the gap for Christians and focus on exposing a public education system that is “promoting an atheist, pro-socialist educational agenda that is destroying our children.” He has gained renown as a prolific author of conservative books, a bold advocate for biblical and conservative moral values in public education. He now writes articles for The New American online (www.thenewamerican.com). His first book “How to Start Your Own Private School” was written at the request of the Conservative Book Club. Others quickly followed, including “The New Illiterates.” Best-known is his reading program, “Alpha-Phonics,” written to help parents teach their children to read at home. It has been used by thousands of home-schooling parents, especially Christians. His expose of the National Education Association, “NEA: Trojan Horse in American  Education,” sold over 60,000 copies and persuaded many parents to home-school their children. He has also written a book on the Shakespeare authorship controversy, “The Marlowe-Shakespeare Connection.”

Engaged in spiritual warfare for years, Sam can attest to the apostle Paul’s words: “For the weapons of our warfare are not carnal but mighty in God for pulling down strongholds, casting down arguments and everything that exalts itself against the knowledge of God” (2 Corinthians 10:4-5).

Helen Mooradkanian is our new Valley Patriot Hero columnist and a former business writer. She is also a member of the Merrimack Valley Tea Party, You can email her at hsmoor@verizon.net