By Dr. Charles Ormsby on October 5, 2005Comments Off on Hero in our Midst – Frank Shimko, E-4 Communications Specialist – Valley Patriot of the Month 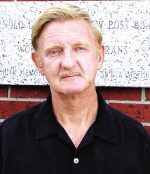 Frank Shimko, E-4 Communications Specialist Frank Shimko didn’t think his future lay in Nebraska, so at 19 he enlisted in the Army. It was the summer of 1965. Not long afterwards, he found himself on the other side of the world and in harm’s way.

Frank was born in Cheyenne, Wyoming in 1946. His dad was a career Army Master Sergeant who served his country for 32 years. Although his dad had numerous duty stations, Frank did most of his growing up in Edgar, Nebraska. In fact, he was able to stay in the same school in Edgar for 12 years. Edgar was a quiet town of approximately 650 residents … very quiet and very flat … much too quiet and too flat for Frank.

Frank graduated from high school in 1965 and, shortly thereafter, decided he had to get out. The Army seemed like the ideal solution. Oddly, Vietnam didn’t worry Frank that much … either that, or Nebraska worried him more!

Frank’s first stop was Ft. Leonard Woods in Missouri for basic training. Advanced Infantry Training at Ft. Gordon, Georgia was next and where Frank became a Communications Specialist as part of the Signal Corps. Graduation in March 1966 was rewarded with orders for Vietnam. Frank was not overly concerned when he received his deployment assignment; Vietnam was just too foreign to his hometown experiences while growing up.

His tour of duty started with a 24-hour flight, by way of Hawaii, to Tan Son Nhut Airbase outside Saigon. A C-130 flight brought Frank to Qui Nhon where trucks were arranged for the trip to An Khe Airbase in the Central Highlands. At An Khe, Frank and the 509th Signal Battalion was attached to the 1st Air Cavalry Division. (Note: It was the 1st Air Cavalry stationed at An Khe that launched the first major helicopter assault in modern warfare against the North Vietnamese Army in 1965 – as depicted in the Mel Gibson movie, “We Were Soldiers.”)

Also based at the An Khe Airbase were Montanyard Tribesmen and Republic of Korea (ROK) troops allied with the American effort.

As is common for troops that are forward deployed, living conditions were less than luxurious. Frank’s picture of his “home” while at An Khe was accompanied by the following captions: “Wall-to-wall dirt” and “Plenty of wild pets.” The pets Frank was referring to were mice, rats and snakes — not pets you would normally want around the house! 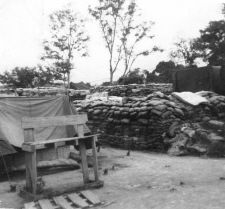 As a Communications Center Specialist, Frank was often called upon to travel by helicopter to “HongKong Hill,” a small Army hilltop communications center for the Central Highlands area. As this was a remote outpost and enemy troops were often operating in the surrounding jungle areas — both above ground and in a maze of tunnels built to resist the French occupation in the 1950s — Frank routinely served guard duty that exposed him and his fellow soldiers to enemy activity. On more than one occasion, Frank and others on guard duty saw what appeared to be enemy movement and they responded with either rifle fire or by throwing hand grenades.

The An Khe Airbase, on the other hand, was a very large and highly protected area because it was the main American air base in the Central Highlands region. It was surrounded by a 100-yard wide, clear-cut perimeter and was well guarded. While this was very effective in keeping out enemy troops, it did not prevent mortar attacks that could be very lethal. 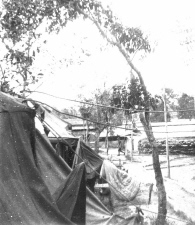 The best defense against enemy mortars was a lot of sandbags — to dive behind when necessary — and liberal use of 105 mm Howitzers to discourage the enemy from firing mortars in the first place. Frank’s other caption with the pictures of his tent that he called “home” for a year was the following: “My alarm clock was constantly going off – Oh, no … that was the 105 Howitzers!” Sleep deprivation is a common recollection of combat soldiers and Frank’s experience with the incredibly loud 105s is no exception.

As protected as An Khe was, Frank did venture out several times alone to visit nearby Vietnamese villages. Looking back, Frank says he knows that was probably not a very smart thing to do. He says he certainly wouldn’t make that choice again under those circumstances. Nevertheless, he did get to see several small villages and had the opportunity to hand out candy and gum to the Vietnamese kids. He even joined in some jump-roping games and enjoyed the local food without any ill effects.

Looking back on his year in Vietnam, Frank recognizes that the experience took him from boyhood to manhood. The hardships associated with collapsing tents, foot-deep mud, monsoon rains, bugs, rats, and snakes were made all the more difficult because of incoming mortars, out-going Howitzer fire, ever-present danger, lost companions, and sleep deprivation. In March 1967, Frank Simko, once just a Nebraska boy, came home a man with a lot of memories – good and bad – to last a lifetime. 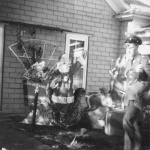 While Frank was in Vietnam, he wasn’t aware of the split in public opinion back in the states regarding the war effort. He spoke to students in Edgar after he returned and received a warm reception. While Frank did not evidence any strong emotions on the subject, it is clear that he is still disturbed to this day by the more extreme anti-American protests that raged while Americans like him risked their lives for freedom in Vietnam.

Frank says that he has never really spoken in detail about his Vietnam experience prior to this interview, even to fellow veterans. He just keeps it to himself.

He still reacts instinctively when he hears sirens or helicopters – these are responses he will probably never shake. He thinks that some of the memories of that era may be suppressed and has occasionally considered hypnosis as a possible way to bring them back. But he is not sure he wants to remember and concludes that it is probably better to let the memories slip away.

When Frank returned to the States, he briefly served at the Army Officer War College in Carlisle, Pa. and then was transferred to a Civil Defense site in Maynard, Mass. It was during this period that he met Elli, currently his wife of 36 years. Frank and Elli lived in Lawrence for 14 years and raised two children while Frank worked for Gibson Motors. Methuen has been their home for the last 22 years where Frank now works for the city. Frank has been the Commander of the Methuen VFW for the last 5 years and Elli has been Women’s Auxiliary President for the same period.

Frank Shimko, thank you for your service to our country.