By ValleyPatriot on July 26, 2017Comments Off on HERO IN OUR MIDST – Joseph Salvatore LaGrasse ~ VALLEY PATRIOT OF THE MONTH 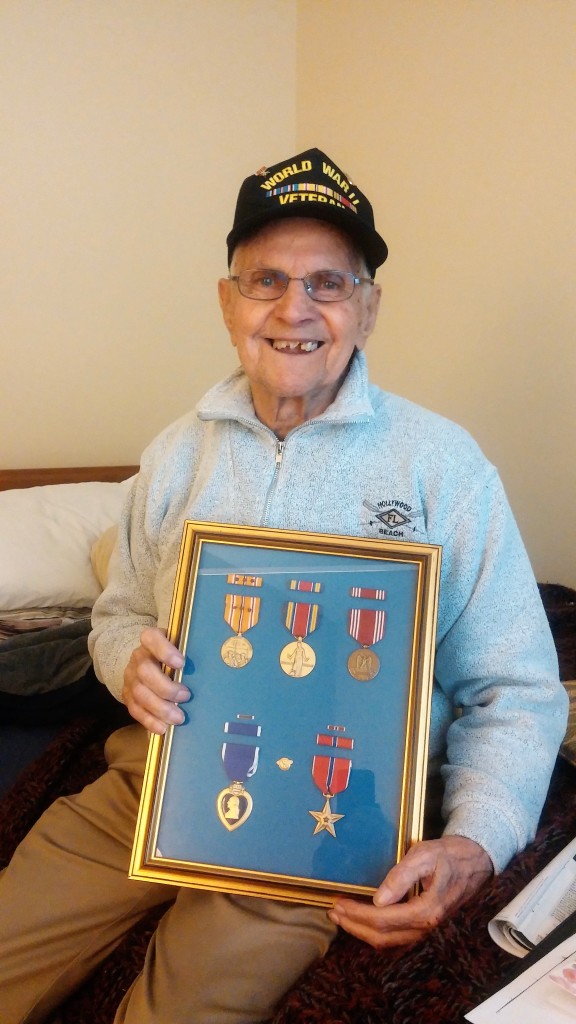 NORTH ANDOVER – As far back as the American Revolution, the bravest of men would run onto the battlefields under enemy fire to provide aid and comfort to the wounded and dying. By the time the Civil War broke out, the realization that medical treatment and the evacuation of soldiers from the front lines was a necessity.

These brave men became known as medics and affectionately called “Doc.” They were the true unsung heroes of wartime.

Sergeant Joseph Salvatore LaGrasse was one of those brave men who risked his own life numerous times to save his fellow soldiers. Sgt. LaGrasse was a member of the Company C 121st Medical Battalion Americal Division during WWII.

Joe LaGrasse was born on June 12, 1918 and grew up on 31 Fulton Street in Lawrence MA. He was one of seven siblings born to Italian immigrants Antoinette and Domenic LaGrasse. His mother was a homemaker and his father worked at the Paper Mill in Lawrence. Joe recalled fond memories and said, “We made homemade pasta, sauce and wine in our house. Those were great times.” Joe is the only remaining sibling at 99 years old. He was predeceased by Marion, Gus, Katherine, Frances, Michael and Vincent.

Joe graduated from high school in 1935. He was employed at the Ayer Mill in Lawrence and did some mason work. Joe stated he attended a Medic program in New Jersey. He also stated he wanted to go to medical school but enlisted in the Army in 1941.

Joe LaGrasse saw two years of combat duty overseas. During his time in the Pacific Theatre, Sergeant LaGrasse served in the capacity of litter platoon section leader and surgical technician. A litter refers to the common stretcher used for carrying casualties. It was one of the essential tools for World War II medical personnel. The litter itself not only provided a means to carry the casualties to the aid station, they were often used as operating tables.

The backbone of these units that Joe was in charge of, were the litter bearers. These brave men lifted and carried the dead and wounded off the battlefield. There was a lot of running over dangerous terrain but that never deterred these men. Many litter bearers were injured or killed (along with medics) by enemy mines and fire or suffered emotional breakdowns from stress and exhaustion. When needed, units employed cooks, musicians, and company clerks as replacement litter bearers.

For a medic, the main objective was to get the wounded away from the front lines. Many times this involved Sgt. LaGrasse and his fellow medics to climb out from the protection of their foxhole under heavy fire or into no-man’s-land to help fallen soldiers. Once they reached the wounded soldier, they would do a brief examination, evaluate the wound and apply a tourniquet if necessary. Joe stated, “Sometimes we would inject a vial of morphine and clean up the wound, then sprinkle sulfa powder on it before we bandaged them up. The litter platoon would remove them from the area as quick as possible.”

Joe and his company were involved in the Guadalcanal and Bougainville Campaigns. The Bougainville Campaign was a series of land and naval battles of the Pacific campaign of World War II between the Allied forces and the Empire of Japan. Sgt. LaGrasse’s selfless act of rescuing wounded allied forces from the Japanese earned him the Bronze Star. “We just went in and took our men back…” Joe stated, teary eyed.

The following statement is from the Army paperwork that reads: Sgt. Joseph S. LaGrasse was awarded the Bronze Star for gallantry in action on Bougainville, Solomon Islands, January 30, 1944. During a combined tank-infantry attack, Sgt. LaGrasse, section leader of a litter platoon, completely disregarded his own safety, went forward beyond his unit’s lines and under intense enemy fire assisted in evacuating the wounded.

Joe was honorably discharged from the Army in 1944. He returned home to Lawrence, MA. He married, had five children and continued to work as a mason. One favorite memory Joe shared was how he met his wife Rose. It was at the Feast of the Three Saints in Lawrence. “I saw her in the crowd and ran to catch up to her. Once I caught her, I introduced myself and we were together from then on.” Joe chuckled.

Over the years, Joe built houses, designed cement walls and poured concrete floors. He also kept up with veteran events and still walks in parades. He walked a little in this past Memorial Day parade. Joe is a member of the Benjamin Cardillo Post in Lawrence (an Italian Post).

Joe has 17 grandchildren and 6 great grandchildren. Joe was still active and living in his own house until just last year. Joe’s son Joe Jr. stated his dad worked in his company for years doing maintenance. He was doing this until he was ninety one. After that Joe maintained the building suites and did light cleaning up to a few years ago.

Thank you Mr. LaGrasse for your brave and courageous service!

HERO IN OUR MIDST – Joseph Salvatore LaGrasse, Valley Patriot of the Month