By ValleyPatriot on November 26, 2013Comments Off on HERO IN OUR MIDST: LT JG Gerald L. Halterman, USN, Pearl Harbor Survivor 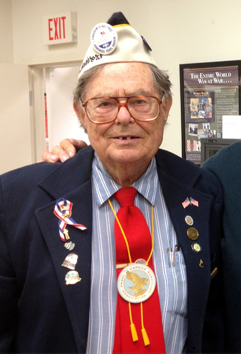 An urgent message came in on the teletype in the communications office at Pearl Harbor, 14th Naval District, where he was on duty for the entire Pacific Fleet. The destroyer the USS Ward had spotted an unidentified submarine in a restricted area, at the harbor’s entrance. “We have attacked, fired upon, and dropped depth charges.”

Immediately below Jerry’s office, in a room he didn’t even know existed, Jerry sensed, from the flurry of activity, the Japanese code was being broken. It was! Japan had ordered all existing codes to be destroyed at once—an ominous sign.

Jerry typed the Ward’s message and handed it to the on-duty officer, unaware he had just typed the message that would plunge America into WWII. One hour later, Japan attacked Pearl Harbor. The next day, President Franklin Roosevelt and Congress declared war.

When relieved of duty early, Jerry headed to the receiving station for breakfast, shower, and sleep.

“At 7:55 a.m., I had just turned into my bunk on the third (top) floor when low-flying Japanese torpedo planes began swooping down over the harbor, attacking our ships,” says Halterman, now 92 and living in Sudbury. “I heard a terrible noise. My bunk was near a front window. When I looked out, I saw the planes coming toward our building—I was directly in their flight path—and flying as low as 50 to 100 feet. As they flew toward my window, then made a sharp right-angle turn, I stared right into the faces of two Japanese pilots, wearing goggles, in open cockpits. The huge red ball, Japan’s symbol, was plainly visible. Forty planes dropped their torpedoes, their wakes going into our ships.

“The first to be hit was my former ship, the USS Oklahoma, taking nine torpedoes. It capsized in 8 to 12 minutes, taking 429 men to their graves, including my three closest buddies. When I ran to a back window, I saw the USS Arizona explode in a ball of flame, a blazing inferno, as bombs hit its ammunition supply—1,777 men aboard died. 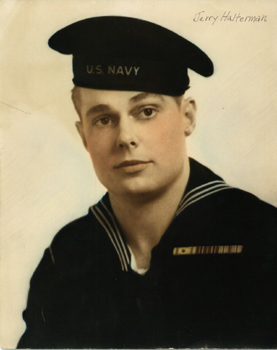 “The Japanese attacked in two waves. The first wave began at 7:55 a.m., with low-flying planes dropping torpedoes on Battleship Row. Because of Pearl Harbor’s shallow 30 to 40-foot waters, no one had expected torpedoes to be launched from altitudes below 100 feet. Yet the Japanese achieved this, replacing the heavy steel fins with lightweight wooden fins.

“The second wave began at 8:55 a.m. High-altitude bombers and dive bombers flew back and forth across the harbor, attacking more ships. They left untouched my building, used as a marshalling point, and also the repair facilities and oil storage tanks. They expected to return to Pearl Harbor and use this fuel six months later to seize Midway Island, on their way down to Australia.”

By 9:45 a.m. it was over. The Japanese left Pearl Harbor to begin a day-long attack on American bases in the Philippines.

More than 2,400 Americans lost their lives at Pearl Harbor on the “Day that will live in infamy,” and 1,778 were hospitalized.

“In the midst of the horror, I always knew God was with me. I felt my mother’s prayers. They carried me safely through the war,” Jerry said.

The high cost of freedom

Jerry grieves deeply for the black-oil-soaked survivors, only the whites of their eyes and teeth showing. For those burned beyond recognition. For the lives cut short. For the terror his former shipmates suffered on the Oklahoma, trampling in the dark on oil-slicked linoleum decks…water gushing through doors left unfastened for an Admiral’s inspection…a single ladder for radiomen stationed three decks below…the 32 men trapped inside until rescued the next day. 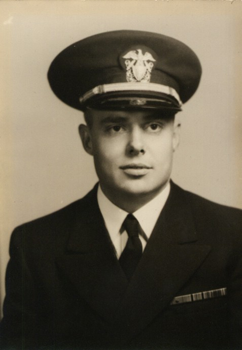 “The attack on Pearl Harbor was a turning point for America,” says Halterman, a member of the Pearl Harbor Survivors Association, Boston Chapter, and one of the incorporators. “It united our nation to declare war against Japan and the Nazis, supporting our ally Great Britain, who stood alone after the fall of France. It saved Great Britain. It saved Australia. It saved America and our freedoms.”

Six months later, June 1942, Jerry typed a crucial message addressed to Admiral Chester Nimitz, Commander of the Pacific Fleet. U.S. planes had spotted four Japanese aircraft carriers near Midway. Admiral Nimitz’ reply, which Jerry also typed, was: “Sink the b—s!” The Battle of Midway, June 4–7, was a decisive victory for America and the Allies, and a turning point in the war.

Jerry cherishes President Ronald Reagan’s words: “Freedom is a fragile thing and is never more than one generation away from extinction. It is not ours by inheritance; it must be fought for and defended constantly by each generation, for it comes only once to a people. Those who have known freedom and then lost it have never known it again.”

Before Jerry Halterman left home for the Navy in 1939, after graduating from high school in Carbondale, Illinois (population 3,000), his mother took him aside and said, “Get down on your knees. We’re going to pray together for your safety.”

“To this day, I vividly remember that time of prayer. It saved my life. I always felt the presence of the Lord with me. She did the same for my two brothers, who served at Okinawa and Iwo Jima. We all came home without a scratch. I firmly believe it was my mother’s fervent prayers, throughout the war, that carried us all through.”

As a child, he remembers lying on the hard wooden pews of Grace Methodist Church each Sunday, the youth groups later on. He chose his companions carefully. In the Navy, he preferred to play baseball and tennis instead of going on shore leave with others. He sees “the hand of God” in the choices he made throughout his life. “In the Navy, I was at the right place at the right time, and my superiors helped me achieve my goals.”

As yeoman 3rd class, he was offered the unheard of privilege of shore duty at Pearl Harbor’s communications office. Despite the “pull” of his friends on the Oklahoma, he felt strongly led to accept it, knowing God was with him.

When Japan attacked, his building was left standing. He ran to grab a gun to fire at the planes but they were all locked up, so he took refuge in a ditch.

He chose Harvard Business School for Naval Supply Corps training rather than amphibious training in Florida, and this prepared him for his 35-year career at Raytheon Missiles Systems Division, in engineering and public relations. The Atomic Bomb ended the war just as he was preparing to take part in the invasion of Japan.

“Each one of us has a purpose in life,” says Jerry. A son born with Down’s Syndrome, now 53, “has been a blessing to our family.”

In the wake of Pearl Harbor’s unspeakable horror and tragedy, we can draw comfort from the Scriptures: “He who dwells in the shelter of the Most High will rest in the shadow of the Almighty. I will say of the Lord, ‘He is my refuge and my fortress, my God, in whom I trust’…and under His wings you will find refuge” (Psalm 91:1-2, 4).