By Tom Duggan on August 3, 2007Comments Off on Hero in Our Midst – Methuen’s Mike Beshara – US NAVY 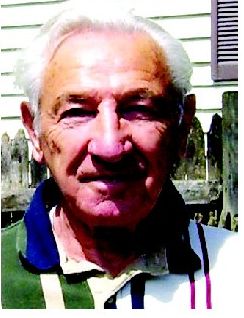 When Methuen resident Mike Beshara tried to join the Navy in January of 1942, he was initially told that he could not join the service because of his age.

“I was only 17 years old at the time,” Beshara recalled. “After December 7, 1941 I really wanted to enlist in the Navy, but my parents had passed away and my uncle couldn’t sign the papers for me to join because he was not considered my legal guardian.”

So, Beshara made an appeal to the Navy and, because his uncle didn’t drive, the Navy arranged to have a judge come up to Superior Court in Lawrence to have his uncle designated as his legal guardian.

By the time the red tape was cleared away it was April of 1942 and the young senior in high school dropped out to serve his country. It would be 57 years later before Beshara would graduate from high school. “My Diploma was issued to me at the Methuen High School in 1999, they gave diplomas to a whole bunch of us who had gone into the service and never finished high school.

Once accepted by the Navy, Beshara says he went to boot camp training at Great Lakes Naval Training Station in Illinois. After boot camp training, he was assigned to the Navy Pier in Chicago where he was trained as an aircraft mechanic and graduated aviation machinist mate 3rd class. From there he was shipped to Hollywood, Florida for Air Crewman training and then to Fort Lauderdale for flight training.

“We did extensive training with machine guns and learned trap and skeet shooting to get use to hitting a moving target,” Beshara said. “Then I went to Clinton Oklahoma. There, I joined what was called STAG ONE, which stood for Special Task Air Group One.

From there, Beshara was sent to Travis City, Michigan where he trained with the first-ever secret spy drone airplanes. “This was a secret outfit with radio controlled drones,” Beshara says. “By this time it was 1943 and we didn’t know it at the time, of course, but we were working on the forerunner of the guided missile system.”

“It was really remarkable. We were working with a mostly plywood, twin engine, unmanned airplane with a television camera built into the nose of the plane. These drones carried 2000lb bombs. The canopy on the cockpit was for training only, but when the training was over and these drones were ready for use in battle, they removed the cockpit completely to make it less wind resistant. The landing was also dropped after takeoff to reduce wind resistance.”

Beshara recalls how the drone planes were just like the Japanese kamikaze planes except there were no pilots to give up their lives.

“Tokyo Rose called us ‘the American Kamikazes’ because they didn’t know this was an unmanned plane. The mother ship, which was a torpedo bomber, could sit four or five miles off the target and direct the drones in. They had a television screen in there so they could see what the drone was seeing, and direct the plane to the target without risking American lives.”

“While the pilot flew the plane, there was a man behind him flying the drone by radio control, a radio man and a machine gun man in the turret.” That’s where Beshara flew with a 50 caliber machine gun in case their plane was attacked.

Some of the drones were stationed on aircraft carriers, but Beshara recalls being sent to the island of Benika in the Russell Islands, northwest of Guadalcanal. “We had set up a small airfield on the island. Some of the targets were anti-aircraft placements and storage caves in Bougainville, but we couldn’t bomb the caves successfully because, when the planes would drop a bomb, they would be too close to the ground and pull up a little too late so the drones would blow up.” 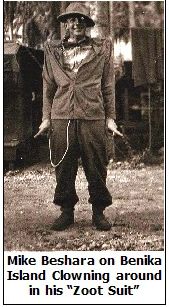 Beshara says the program was not all that successful during World War II and, though the drones were designed to prevent the loss of American and allied soldiers, one very famous American soldier died working on the drones.

“Joe Kennedy, JFK’s older brother, was killed in Europe working on the drones. They were flying a B24 or B17. They had them all loaded with about 25,000 lbs of explosives, but the munitions experts were all marines and General George Marshall said that, as long as he had anything to say about it, there would never be any marines in Europe. Marshall didn’t like the marines, so the marine munitions expert couldn’t go over there to make sure the explosives were set up properly.

That’s when they asked for two volunteers. Joe Kennedy and a guy named Whiley agreed to go.” Beshara conjectured that, “While they were arming the explosives there was short circuit somewhere and it exploded and killed them both.”

“While we were overseas in Benika, our outfit was suddenly decommissioned. Our commanding officer, Commodore Oscar Smith was not a pilot and Admiral Tower, sitting back in Washington D.C., was making the decision that you can’t have an aircraft unit without a pilot as a commanding officer. So that was the end of the drone program,” Beshara said, “at least until after the war. But this was the forerunner of the guided missile system and the drones being used today in Iraq are just a smaller version of the drone program we started in the South Pacific.” 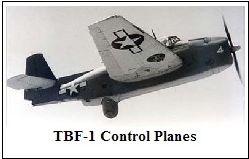 “My older brother Herbie was in the Army Signal Corps and surprised me one day when he just showed up on the Island of Sumar. He had been stationed in the South Pacific and, when he found out I was in the Philippines, he spoke to his commanding officer to try and find out where I was. They had to courier the mail to the troops and he let my brother come to find me. The day after I met him, I received orders to come back to the states. All air crewmen were being reassigned to the states to train for the invasion of Japan in June 1945.”

Mike says he was shipped back to the U.S. and was given a 30 day leave of absence. “I was home for 4th of July, in 1945.” Beshara remembered how he visited the center at Salisbury Beach wearing his flight jacket, “because it was just so cold for me after spending all that time in the South Pacific. People thought I was crazy because, to them, it was a hot summer day, but, compared to the South Pacific, it was like winter to me.” 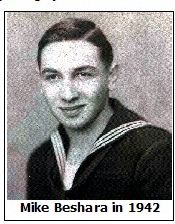 After his leave of absence , Mike Beshara was sent to the University of Oklahoma for further training “Of course,” Beshara added, “in August they dropped the atomic bomb on Japan.” Beshara was discharged honorably in January of 1946.

“That’s when,” Beshara said laughing, “I was a member of the 52/20 club. It was our funny name for unemployment. It was $20 a week for fifty-two weeks or until we found a job.” Beshara did find work in the Wood Heel factory on Osgood Street in Methuen, which is now home to luxury apartments.

Continuing His Service to America Here at Home

Mike Beshara’s dedication to service and country did not end when he was discharged from the Navy in 1946. He joined the American Legion and the VFW, and was active in local politics and community service in the city of Methuen. 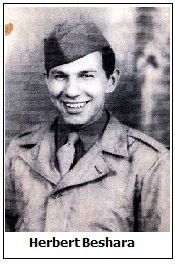 Beshara also volunteers his time on a cable television program run by Methuen City Councilor Kathleen Corey Rahme titled “Call to Serve”. The television program highlights the heroic service of military men and women from Methuen. “I remember when Kathleen was getting ready to tape her first show and she asked me to sit down and do an interview for practice, and I said yes. We sat down and did the interview and immediately afterwards the other volunteers in the studio said that it was great, so Kathleen said, ‘Let’s just use this interview as our first “Call to Serve” show,’ so my story was the first in the series that was aired.”

Beshara said all the veterans who have been honored on “Call to Serve” were asked to sign a waiver release for the library of congress in Washington D.C. so that the public could view the tapes for years to come.

Mike Beshara is so typical of the men and women who are willing go off to war, putting their lives on the line for our freedoms here at home. He doesn’t consider himself a hero despite the fact that he sat in the machine gun turret of a fighter plane and was the most at risk of losing his life when they encountered enemy plane gunfire. 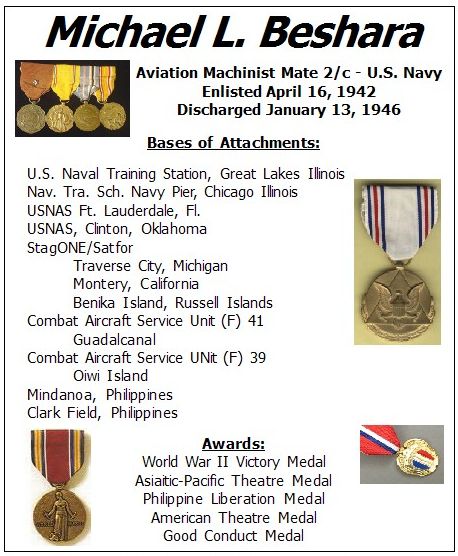 Like so many of those who answer the call to serve, Mike Beshara didn’t stop serving his country when his military service was over. He continued to fight for a better community and a better America through his community activism and the way he has lived his life right here in the city of Methuen.

We thank you Mike Beshara for your military service, for your undying loyalty to your country and your community, and we are honored to call you our Valley Patriot of the Month. You are truly a hero in our midst and the people of Methuen should recognize forever the sacrifices you have made to make life better for the rest of us who have reaped the benefits of your service and sacrifice.