By ValleyPatriot on August 2, 2006Comments Off on Hero in Our Midst – Part 1 – Staff Sgt. Eldon Berthiaume, Infantryman WWII 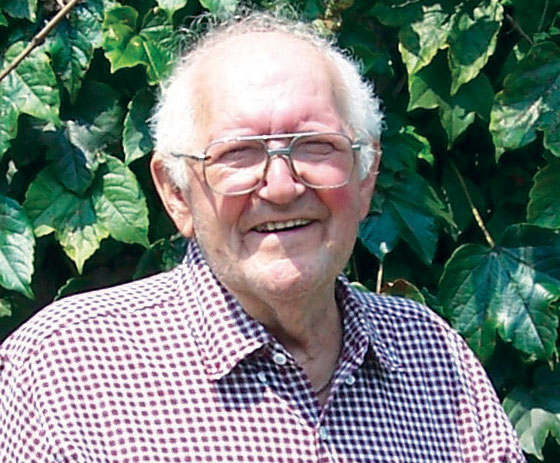 LAWRENCE – When Eldon Berthiaume graduated from Lawrence High School in the spring of 1942, he had no idea that in less than three years he would end up with thousands of other Allied soldiers as a POW in Germany at Stalag 5A. He would learn to subsist on a slice of bread, a chunk of lard and sometimes some green soup for much of the time, and endure the loss of 50 pounds during his four-month imprisonment.

Eldon was born on September 10, 1924 in Lawrence to Aldona and Clement Berthiaume. On December 7, 1941, a teenage Eldon was with his parents on the way to Gardner when a Boston Herald newsboy on a street corner yelled “Japs bomb Pearl Harbor. Read all about it!” They stopped to get a paper about the impending war.

After graduation, and like many young men of the era, Eldon went to work in the mills. He got a job in the weave room at the Shawsheen Mill in Andover.

When war was declared, Eldon knew the Army would eventually come after him and, in the summer of 1943, he was drafted. He was sent to Ft. Devens for basic training and subsequently assigned to an MP company. After a short stint at an Army base in Michigan, he was ordered to Ft. Ethan Allen in Vermont where he continued his MP duties. 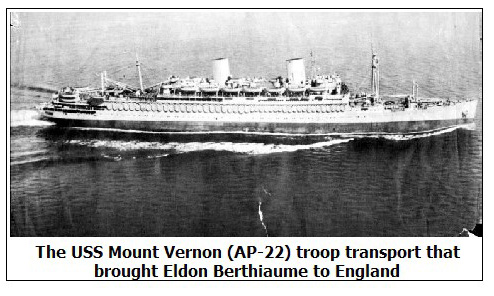 Late in 1943, Pvt. Eldon Berthiaume received orders to go overseas. He shipped out on the USS Mount Vernon troop transport as part of a convoy to England. After he arrived, he spent much of the year as an MP directing military traffic. This was during the massive build-up of equipment and troops in preparation for the Allied invasion on D-Day. Afterwards, as more tanks and equipment continued to arrive in support of the newly established front, Eldon’s services as an MP were still needed. Then, suddenly, in late 1944 Eldon was reassigned as an infantryman to the 3rd Infantry Division, 7th Infantry Regiment, Company G … and sent to France.

In early 1945 Eldon’s unit was ordered to take the small village of Utweiler in the Alsace-Lorraine area just across the border in Germany. This would be the first incursion of Allied forces onto German soil. Before the troops started out, Major General John “Iron Mike” O’Daniel gathered them together and told them that there was “no opposition” in front of them. Still, the troops were nervous because of the impending battle, and Eldon remembers that almost all skipped their meal that afternoon, including himself. At 6 p.m., the troops started out and marched all night long towards Utweiler to relieve the 26th Yankee Division. They reached the town around 5 a.m. and suddenly found the ridge above the town lined with German tanks and troops.

His radioman urgently requested tanks to counter the threat. Three scouts were sent out to meet the U.S. tanks to guide them in … but the GIs never made it. And the U.S. tanks never came.

There were minefields all around, so Eldon and five of his buddies took shelter in the open cellar of a nearby house, waiting for help. All of a sudden, a German soldier burst through a door – a kid no older than fifteen or sixteen – and in German ordered the Americans to put their hands up.

He marched them out of the cellar and headed them towards the German lines. They were passing a wounded German officer when one of the American GIs stopped to put a tourniquet on the German’s leg to stop the bleeding. The officer then said something to the young German soldier which Eldon later interpreted to mean “Take care of these prisoners; don’t let anything bad happen to them.” 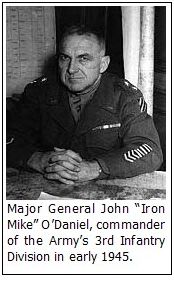 The six Americans walked all day long behind the German lines until they came to a house about 4 p.m. They were taken to the second floor where another German brought them each a slice of bread and a piece of lard. At this point Eldon wished he had taken advantage of the Army meal he had skipped the day before.

One by one the Americans were taken out of the room and disappeared, until Eldon was the last one left. He feared the worst as he could constantly hear rifle fire in the distance. A German soldier came and Eldon was taken to a sparse room with a German interrogation officer behind a desk. Then the officer spoke – in perfect English! He had been educated in the U.S. and had returned to Germany to settle some family matters when the war broke out. He couldn’t get back to the U.S. and was drafted into the German Army as an interpreter.

Eldon gave the officer his name, rank and serial number. Then the officer told Eldon that he would be “alright” and shortly afterwards he was reunited with his five buddies. Suddenly, artillery began to rain down on the area as the Allies advanced.

The American prisoners were hastily put back on the road with long lines of German troops heading further back into Germany. It was here that Eldon noticed that the Germans were using horses to pull their artillery and supplies, and he thought, “the Germans don’t have any gasoline left!”

Again, they marched all night long until they came to a POW camp where they stayed for three days. The prisoners were introduced to a green soup which they nicknamed “spinach soup.” From here they were taken to a railroad depot to board a train. As they were assembling, Allied planes appeared and strafed and bombed the train, totally destroying it. Some Germans were killed in the attack, but, fortunately, the American prisoners were unharmed.

So it was back on the road where they were forced to march to Stalag VA [5A], a POW camp in Ludwigsburg. Here there were at least hundreds and maybe more than a thousand prisoners with large contingents of Russians, Americans, British, Poles, French, and Indians. Each ethnic group stuck together and always had something to trade to the other prisoners to make life more endurable. 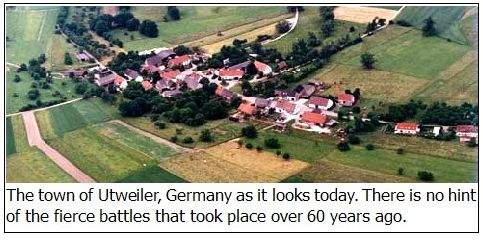 Eldon remembers that the Russians always had tobacco for trade. The British had tea. The Americans sometimes had chocolate from Red Cross packages. The Indians, he said, were able to skip eating for several days and would trade food for other items. He noted that the French always seemed to have the latest intelligence on the Allied progress in the war. He was convinced that they had a daily source feeding information into the camp.

There was a day when Eldon was very hungry and he approached one of the Indian soldiers for food. Eldon was willing to trade his watch for a meal. The Indian carefully examined Eldon’s watch.

Then the Indian took out a list from his pocket and on it were written the names Bulova, Hamilton and other well-known makers of fine watches. Eldon’s watch, which was an inexpensive brand, was not on the Indian’s list. The deal was off. Eldon stayed hungry that day.