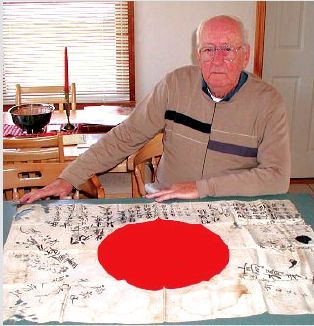 Andover, Mass. – “I was furious at what they did,” said Ted Cole, recalling his emotions after hearing about the bombing of Pearl Harbor. Less than 24 hours later he and his two brothers were in line at the recruiting station in Lawrence. “The line was out the door and down the sidewalk. It took all day to get signed up.”

After seeing pictures of the attack in the paper, Ted wanted in on the action. He wanted to be in gunnery and in the Pacific to fight the Japs. Ted also hoped to use his skills in photography that he had acquired as a teenager. All his wishes came true, but the experiences almost certainly exceeded whatever he could have imagined in those early days of the conflict.

Ted was born in Andover in 1921 and was 21 years old when he enlisted on December 8, 1941. Because of a problem with the vision in his left eye, he was initially refused admission by the Navy. Instead, he was sent to Boston for further testing. Every two weeks he went back, but couldn’t get past the eye test. Finally, the doctor told Ted to take the rest of the physical … if he had no other problems, he would be sent to Mass General Hospital to correct his vision.

After a successful eye operation, Ted was finally accepted by the Navy in June of 1942 and sent to Newport, Rhode Island for basic training in gunnery. At the end of basic, he was on the verge of being sent for additional training when the call came: crewmen were needed for a new light cruiser, the Columbia (CL-56, the “Gem”). Next stop: Camden, New Jersey.

The Columbia had been launched ten days after Pearl Harbor, but at that time it was still just a floating shell. WhenTed arrived, the Columbia was fully outfitted and ready for sea trials. As a member of the ship’s initial crew, Ted is officially a “plank owner” … a term derived from the time of wooden boats.

Ted remembers one very exciting test of the Columbia. Because of the immense complement of equipment, the weight of the big guns and the size of the superstructure, there was concern that under some extreme operating conditions the ship might capsize. So what can you do, but try to capsize it? The Columbia’s guns were all pointed to one side, the ship put in a maximum rate turn, and, just as the ship was at its peak roll angle … all guns were fired simultaneously. The ship dramatically increased its roll angle.

Thank God all the crew had on life preservers and were kept away from the railings, because the ship heeled over to such an extreme angle that the ship’s deck went under water. With all the crew praying the ship would right itself and not continue its roll … it hesitated … and then slowly rolled back to vertical. Such a test would never be performed today … computer simulations are much safer!

In November of 1942, the Columbia departed the U.S., passed through the Panama Canal and headed for Espiritu Santo in the New Hebrides. Ted recalls a fueling stop in Tongatabu with fond memories. The stop was for only a few days, but he remembers it as a South Sea paradise.

After the Columbia crew arrived in Espiritu Santo, they witnessed major units returning from the Battle of the Coral Sea. It was a rude awakening: there were ships with their bow shot off, superstructures badly damaged and numerous casualties.

Over the next three years the Columbia steamed 178,000 miles in war-torn seas. A mere listing of engagements cannot impart the magnitude of the effort, risks taken and sacrifices made, but to not list them would be a disservice. Ted Cole was one of less than 200 plank owners that served, start to finish, on all three cruises.

Ted’s duty was both as a gunner’s mate and as ship’s photographer, 3rd class (a job he inherited when the ship’s previous photographer was promoted). His primary duty was on the 40mm anti-aircraft guns (he manned the lower turret just below and to the left of the gap between the two largest towers … see previous photo). Photo duty was clearly secondary to his fighting role, but Ted noted that he could control firing of the 40mm radar-directed gun with his feet and still take pictures of incoming Jap planes. And incoming they were …

The Columbia’s encounters with Jap Kamikaze attacks in early 1945 were incredible. During the Luzon Operation inJanuary, concentrated Kamikaze attacks were made on numerous ships in the fleet. Several suicide planes were shot down by Columbia. For a while, Columbia turned attacking planes away; one diverting and hitting a nearby destroyer. Finally, a Kamikaze came in on a strafing run intending to end its attack in a suicide crash. The plane came in just above Ted and to his left, hit the antenna wires hanging between the main towers and crashed close aboard. The result was Ted and nearby crew members being showered with gasoline from the Jap’s gas tanks.

That was the first of three Kamikaze pilots that succeeded in hitting the Columbia. Later that afternoon, the second Kamikaze to hit the Columbia struck. Luckily, it was hit by 40mm fire in its right wing before impacting or it would have hit the bridge directly. Instead, it swerved and crashed into the main deck near turret number four. The plane and bomb penetrated the deck and the 800 kg bomb (~1760 lb) penetrated the second and third decks before exploding … blowing six large holes in the bottom of the Columbia. Nine compartments flooded, but miraculously the ship’s magazine didn’t explode. If it had detonated, the Columbia would almost certainly have sunk. Seventy-seven casualties were sustained – 17 killed and 20 listed as missing in action.

On January 9th, a third Kamikaze succeeded in striking Columbia. Traveling at 400 mph, the plane was also hit by 40mm gun fire on its way in, but its momentum carried it into the Columbia’s forward main battery director … just above Ted’s position. When the plane and its 250 kg bomb (~550 lb) exploded, the main battery director was knocked off its tower and it, along with six crew, were thrown into the ocean. Seventeen men were killed or died of wounds sustained by this attack and ninety-seven others were wounded. The six crew in the battery director were never recovered.

When the third Kamikaze struck, an amazing event occurred. As the plane with its pilot exploded, a piece of the pilot’s cloth flight jacket was thrown free and landed in Ted’s gun turret. A fellow gunner was killed and fell on Ted, who was knocked unconscious by the explosion. Shipmates evacuated the wounded and took Ted’s dog tags (and other personal effects) and those of his deceased crewmate. When Ted regained consciousness, he moved his dead crewmate so he could get up. That was when he discovered a torn piece of flight jacket which included an inside pocket containing the pilot’s “Kamikaze flag”. This is the only known Kamikaze flag ever recovered from a Kamikaze pilot who struck an American warship (see opening photo).

Amidst the horrors of war, occasionally a light moment is recalled. In the famous Battle of Leyte Gulf (the largest sea battle in the history of the world), a radioman on a nearby ship, concerned that Columbia (codenamed Greyhound) might draw Japanese fire, called the Columbia and said, “Greyhound, you have a light showing from you bow porthole.” The Columbia responded, “We don’t have a bow porthole.” “You do now,” said the radioman. And sure enough they did … a big hole from Japanese artillery fire. It is probably much funnier now than it was then.

After the Japanese surrender, Ted supported post-war activities in the Pacific (mostly on Truk Atoll) for several months and then left active duty in November of 1945. Ted continued to serve in the reserves for four more years. He was married in March of 1946 to Lucy, whom he had plans to marry before the war, but who faithfully awaited his return from active duty. After the war, Ted worked at Craig Systems for 14 years and then another 23 years for the Defense Contract Administration Services in Boston. Except for his years of service in the Pacific, Ted has been a lifelong resident of Andover.

Ted, thank you for your service to your country.