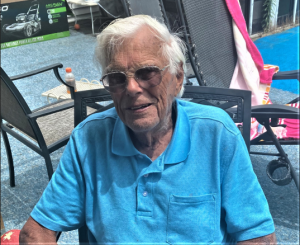 DRACUT – Born April 19, 1927, the youngest son of Polish immigrants, Dracut’s Alfred Araskiewicz was introduced to me by a fellow Scout leader, his neighbor, Paul Taylor.

He graduated from Dracut High School with the Class of 1944. My first interview was with his granddaughter, Jennifer Phillips. She says, “my grandfather, Private First-Class Alfred J Araskiewicz, was a paratrooper in the US Army’s famed 82nd Airborne, jumping into Germany twice”.

He was trained in both glider and paratrooper operations. Earning the US Army Parachutist’s Badge, (nicknamed Jump Wings by the troops) the US Army Glider Qualification Badge, the US Army Occupation Medal, (European Theater) the World War II Victory Medal, and of course, the coveted (especially after Germany surrendered) Honorable Discharge “Ruptured Duck” lapel pin.

While in the Army, his appendix ruptured on a patrol up in the Bavarian Alps of Germany, and he had to have it removed. His fellow soldiers cut a landing strip in the side of the mountain so he could be medevac’d. Alfred was assigned to the 82nd Airborne’s 508th Parachute Infantry Regiment, based in Frankfurt Germany. He served from July of 1945 to February of 1947, most of his time in the Army, was with the 508th.

He kept one German family from starving after the war, by providing a little boy with a box of Red Cross donuts each day. The young child, merely a toddler, would climb a set of stairs in the bombed-out building Alfred and his team were living in, every day, early in the morning, for his family’s donuts. This led to an interesting conversation on the brand of cigarettes found in the US Army rations during World War II. 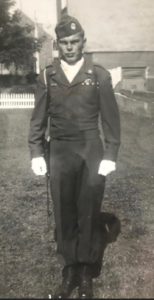 According to the National Museum of the US Army, during World War II, and until 1976 a mini-pack of either three or four Old Gold, Chesterfield, Lucky Strike, or Camel cigarettes, along with a fold of waterproof paper matches, was included in the rations issued to our fighting troops.

At 93, Alfred vividly remembers that in most of his rations, the cigarettes were “Old Gold”, and the non-smoking soldiers traded these for food and other items with their fellow servicemen and local civilians. The cigarette companies were trying to market their brands and at the same time, earn customer loyalty from the troops for sales after the war.

According to the popular military newspaper, the Army Times, nearly 2,800 members of the 82nd Airborne participated in all four World War II combat jumps with the 82nd Airborne Division — in Sicily, Salerno, Normandy and Holland. Fewer than sixteen of these heroes remain living today. Alfred was qualified as both a parachutist and a glider troop. He told me that he considered jumping with a chute to be much safer and less nerve wracking, than trying to land in a glider.

World War II saw the birth of “Airborne Infantry”, with the first major jump conducted by the Germans during the invasion of Crete.

Alfred, after serving in the US Army and returning home, became a pilot and flew private planes, flying out of the now closed, Richardson Airport in Dracut, Massachusetts. Later, Alfred became a fire fighter for the Town of Dracut. Then, he switched career paths, and joined the Dracut Police Department. He also worked security at the famous Golden Nugget in Las Vegas, once saving Country legend Johnny Cash from an irate fan after a concert.

Later in his career, he became an amazing fine wood carpenter and cabinet maker, a union carpenter for Local 111 for 50 years, who was widely known for his beautiful custom work. Three locally famous projects he worked on, were Timberlane High School and the A1 Deli in Haverhill, meeting Senator Ted Kennedy at the diner’s grand opening. He installed the windows in the Mt. Washington observatory, while working for Cheviot Corporation in Needham, MA. He was a supervisor in their Window Division. Cabinet making was his true passion in life, especially as he got older.

The members of the “Greatest Generation” are all heroes. Something Alfred did, made him a special kind of hero. Alfred was best friends with, and a coworker of Joseph Serratore. Joseph was married to Helen Reardon. The couple had two children, John and Judy. When Joseph passed away from a health condition as a young man of thirty- nine, Alfred then married Helen and became a devoted stepfather to John and Judy.

Alfred had three sisters and a brother. When he was serving in Germany during the war, his sister Jenny used to send him bars of soap to give to nearby German families left impoverished by the war. Before the war, as a young child, he traveled with a circus, along with his sister Josie and her husband, their act was called “Young People of Parade”.

He was married to the love of his life, Helen Reardon, who passed in August of 2015. The couple raised two children, and now have three grandchildren, and several great grandchildren. He has certainly had a full life. He just turned 93 on April 19th. He is so thankful, that he can talk freely about some of his journeys, sharing his life story with the youth of the Merrimack Valley through the Valley Patriot.

Thanks to neighbor Paul Taylor, Judy O’Connell (Alfred’s daughter) and Jennifer Phillips (Alfred’s granddaughter) for their help with this article, preserving the story of a soldier in the 82nd Airborne for generations to come.

The Dracut American Legion asks all World War II, Korean War, and Vietnam War Veterans, to call 603-518-5368 and sign up for an Honor Flight to the Memorials in Washington DC! Veterans of all eras, are asked to go the American Legion’s Web site and join the Legion, preserving our Veteran’s Benefits for future generations.

HERO IN OUR MIDST, VALLEY PATRIOT OF THE MONTH ~ Dracut’s Alfred Araskiewicz: Paratrooper and Glider – 82nd Airborne added by ValleyPatriot on July 28, 2020
View all posts by ValleyPatriot →

3 Responses to "HERO IN OUR MIDST, VALLEY PATRIOT OF THE MONTH ~ Dracut’s Alfred Araskiewicz: Paratrooper and Glider – 82nd Airborne"