By Tom Duggan on January 10, 2006Comments Off on Hero in our Midst – William Callahan – Valley Patriot of the Month 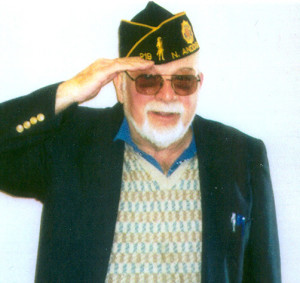 NORTH ANDOVER – Lawrence native Bill Callahan served his country in two wars, World War II and the Korean War. After completing his military service, he has also spent decades volunteering in the community and working to help others.

When Bill Callahan graduated from Lawrence High School in 1945, the 17-year-old knew that he needed to learn a trade to get a job.

America was in the heat of World War II and, coming from a military family (his dad was a Navy man), Bill decided to enlist in the Navy and learn electronics. His father even took him to the recruiter to sign him up.

Bill quite vividly remembers his first day of boot camp. He went by train from Boston to a Navy facility at Sampson, New York.”It was April 12, 1945, the day President Roosevelt died,” Callahan recalled.

“We threw together our uniforms and stood in the rain in commemoration of Roosevelt’s dying day,” Callahan added.

While at boot camp, Callahan says he always had trouble learning how to march. “I have short legs and could never keep in step,” he recalls. Every time the drill instructor caught him out-of-step, he had to “watch a ‘foolish’ clothesline” from midnight to 4 a.m. the following night. This, unfortunately, happened more often than Callahan would have liked.

Boot camp lasted 10 weeks and Bill was then assigned to a small aircraft carrier, the USS Puget Sound. The ship carried 800 men and 30 planes. The Puget Sound was stationed in the South Pacific during the war. 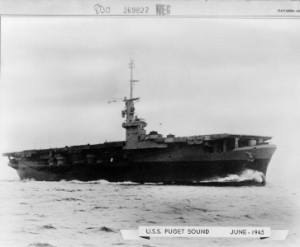 Bill Callahan enlisted as a seaman, which involved scraping paint, followed by painting, and a few days later scraping off the paint again. He also swabbed the deck. Later, he was fortunate enough to become the chaplain’s yeoman aboard ship.

“We had one priest and he was the chaplain for all of the services. I was the one assigned to assist him,” says Callahan.

Bill served in World War II until the war ended. After returning to the states, he says he wanted to learn more about electronics and decided to sign up for a U.S. Naval Reserve program.

Bill remembers that there was a reserve center near the Lawrence Veterans Memorial Stadium. Bill signed on and eventually achieved a rating for electronic technician third class.

When the Korean War broke out, Bill learned that the United States Navy needed electronic technicians, and again Bill answered the call to serve and went off to war.

This time, Bill Callahan was assigned to the USS Block Island II, an escort carrier stationed off the coast of Korea providing the technical assistance that the Navy needed. While in Philadelphia waiting for the refurbishing of the Block Island II for the war, Bill and his wife had their only daughter, Betty. “It was hard, of course, having the baby at home for two years while I was at sea,” he said. Bill says that the Navy was very good to him and his family, providing diapers and other items for Betty while he was at sea.

Bill Callahan’s daughter Betty now works at the North Andover Senior Center where he is able to see her several times a week.

Bill says that one of his most memorable moments was outside the U.S. Navy Hospital where Betty was born. “They were filming the movie ‘The Greatest Show on Earth’ and I got to meet the great Jimmy Stewart.”

While at sea, Bill’s shipmates had a contest to select the “Most Typical American Girl.” The winner was a young lady from Pennsylvania. When the Block Island II arrived in San Diego after the war, they paid for her transportation and flight to San Diego. Unfortunately, when she came off the plane, all of the men were disappointed because she was pregnant. However, there was a big USO event at the time featuring the Andrew Sisters and Bill was called on stage to sing with them.

Bill served two years in the Korean War until it ended.

For his service in both wars, Bill Callahan received the World War II Victory Medal and the Pacific Theater Medal, and the Korean Medal for the Korean War.

After completing his service, Bill worked for 22 years at Honeywell in the Woodmill Building in Lawrence. Bill lived in Lawrence until five year ago, when he moved to North Andover.

After serving his country in two wars, Bill Callahan’s interest in public service continued. Bill was instrumental in helping the Bread & Roses festival establish itself in Lawrence and he has always been eager to volunteer in the community.

Bill is currently a member of the American Legion Post 219, is an active volunteer with the North Andover Senior Center and helps out at the Sutton Hill Nursing Home, working with veterans and running the men’s club.

He still volunteers at Bread & Roses. He also sings in a group called Vocal Airs, in North Andover.

A while back he was fortunate enough to represent the United States with the Garrett players in Finland.

The Valley Patriot would like to thank Bill Callahan for his military service to our country and all of his many years of public service to the community. We are proud to honor Bill Callahan as our Patriot of the Month..

If you would like to nominate a veteran to be honored as a Valley Patriot of the month please call us at (978) 557-5413 or email us at ValleyPatriot@aol.com

Hero in our Midst – William Callahan – Valley Patriot of the Month added by Tom Duggan on January 10, 2006
View all posts by Tom Duggan →