By Tom Duggan on December 5, 2006Comments Off on HEROES IN OUR MIDST Chief Master Sgt. Michael Ingham U.S. Air Force 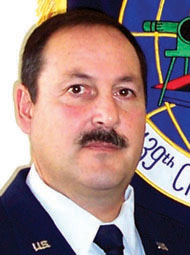 HAVERHILL – Next month Mike Ingham will retire after 33 years of service in the Air Force, both on active duty and in the reserves. His assignments have taken him all over the world: Germany, Italy, Spain, England, Alaska and Central America.

Born in Haverhill in 1953, Mike grew up in the city and attended Haverhill High School. He graduated in 1971 and at the time had no interest in joining the military, particularly since the Vietnam War was still being fought.

His mother urged him to continue his education and signed him up at the Montserrat College of Visual Art in Beverly. She told him that if he didn’t pursue educational opportunities, he would end up “driving a truck.”

Mike went off to school and studied fine art, photography and sculpture, among other pursuits. But after two years, Mike was looking for something else. So in December of 1973, Mike Ingham went down to see the Air Force recruiter in Haverhill and enlisted.

Mike was sent to Lackland Air Force Base in Texas for what was supposed to be eight weeks of basic training. He had been told that this was the best time of the year to go because there were two weeks during Christmas and New Year’s that didn’t count. However, he remembers that when he got there he found out that he still had to train during those two weeks that “didn’t count” – so he ended up with a total of 10 weeks of basic training.

On New Year’s Day, 1974, during training, Mike met Shirley Lawrence from the small town of Alger, Ohio. After a short courtship, the two were married on February 23, 1974. 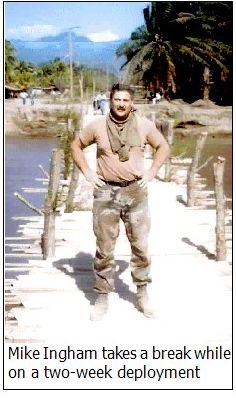 Mike had decided he wanted to be a loadmaster, one who loads equipment and supplies onto airplanes. But that particular school was not open at the time, so he ended up at the “heavy equipment” school. Here, Mike learned to operate front-end loaders, bulldozers, cranes, graders, forklifts and large tractor-trailers. He chuckles when he recalls his mother’s warning about ending up “driving a truck.”

Mike was asked to stay on as an instructor, but he and Shirley decided to accept an assignment to Bitburg Air Base in Germany as part of the 36th Tactical Fighter Wing. Mike was now a heavy equipment operator and spent his time maintaining/constructing roads and buildings at the base. One of his critical jobs was training for the emergency repair of runways

This was during a period of the Cold War when the threat from an invasion of Soviet and Warsaw Pact forces was always present and the U.S. had to be prepared. If the Soviets ever attacked, the route would be through Germany. Bitburg was a major defensive position and once its fighters took off to oppose the invading force, they would need undamaged runways to land on, refuel and continue combat operations.

After two years in Germany, Mike and Shirley were transferred to Little Rock Air Force Base, Ark. Mike continued to operate heavy equipment in maintaining the base infrastructure, but occasionally got to load the giant C-5A Galaxy cargo plane.

Near the end of the two years in Little Rock, Mike and Shirley decided it was time to leave the Air Force and return to civilian life. They came back to Haverhill and Mike got a job with J & A Construction, and later with Toremeo Trucking, both in Methuen.

Then, in 1978, Shirley decided she wanted to join the Air Force Reserves. However, shortly afterwards she changed her mind and told Mike she was signing him up instead. The next weekend Mike reported to the 905th Civil Engineering Squadron at Westover Air Force Base in western Massachusetts. Shortly afterwards, the squadron was reorganized to become the 439th Civil Engineering Squadron. 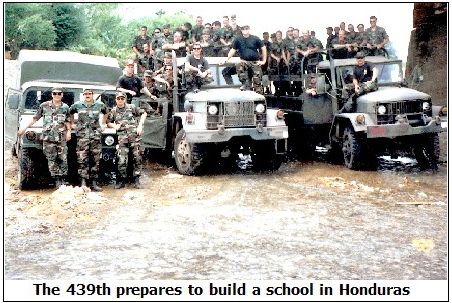 He remembers the first thing he was told when reporting for duty – get a haircut!

This would be the beginning of Mike Ingham’s life-long commitment to the Air Force Reserves.

He remembers well his first assignment, in 1978, to Lakenheath Air Base in England. Mike’s main job was to build revetments on the base, but at one point he was given the keys to a tractor-trailer and told to deliver some material. He recalls the harrowing experience of quickly learning how to drive a big rig on the left-hand side of the road without creating an accident!

In 1989, about 50 members of the 439th spent two weeks at the Soto Cano Air Base in Honduras. Mike, who was a master sergeant by now, unfortunately was not allowed off base because there was a lot of unrest at the time. The Contras were still fighting the Sandinistas in Nicaragua and General Manuel Noriega, as the leader of Panama, was suspected of being a drug kingpin. Mike remembers that the base was crawling with Special Forces troops and, while the 439th was at the base, the U.S. actually sent forces into Panama to capture Noriega. 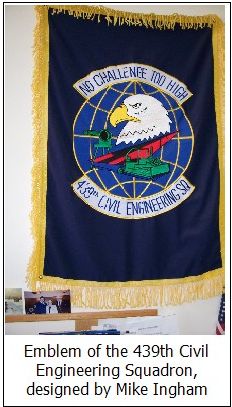 In the early 1990s, after the region had settled down, Mike and the 439th were sent to Howard Air Force Base in Panama to renovate buildings for housing units. Mike vividly remembers his fascinating tour of the Panama Canal and its huge locks and ship-towing trams.

He also recalls his experience in Panama City. There was a great disparity between the rich and the poor and it showed. Mike says there were occasionally dead bodies in the streets with buzzards nearby. He had never seen buzzards in a city before.

In the late 1990s, after Hurricane Mitch devastated Honduras, Mike and his squadron were again sent to that Central American country, this time to rebuild a school destroyed by the storm. In the area where they were to work, over 2000 people had died and thousands more were still missing. Even with all this hardship, the Hondurans were delighted to see the 439th.

The mayor and a large number of locals turned out to help the Air Force squadron build the new school. With everybody pitching in, the school was completed within the two-week period the 439th was on site.

Twice while Mike was with the 439th, the unit was activated. The first time was in 1990 for operations Desert Shield and Desert Storm. The 439th spent seven months at Westover, helping to keep the base running during the massive build up of troops being sent to defend Saudi Arabia and eventually liberate Kuwait. Westover was a launching point for troops from all across the country on their way over to the Middle East.

The second time the 439th was activated was after the Iraq War in August of 2004. The squadron spent four months at the Al Dhafra Air Base in the United Arab Emirates (UAE). This base was a support hub for our troops fighting the terrorists and insurgents in various parts of Iraq.

The base operated with KC-135 tankers and U-2 spy planes, as well as several of the new Northrop Grumman Global Hawk Unmanned Aerial Vehicles.

Mike worked directly for the base commander, a colonel, on managing construction/maintenance projects as well helping with security for the base and its personnel.

During most of Mike Ingham’s association with the 439th, there were about 100 reservists in the squadron. Approximately 10 percent of these were women. In recent years, the 439th has been reorganized by adding other units and now numbers about 150 reservists.

When the 439th was first organized into a squadron, Mike offered his art school training and proudly designed the unit’s emblem.

Since Mike has belonged to the squadron, the 439th has received several “outstanding unit” awards and Mike is quick to add that he feels privileged to work with what he calls “the finest group of electricians, carpenters, contractors and maintenance people that you could ever imagine.”

The 439th Civil Engineering Squadron is part of what is called the Air Force Expeditionary Force.

The Expeditionary Force coordinates the various Air Force Reserve units from around the country so that when one unit leaves an assignment, another seamlessly takes its place. This provides continuity until the task is completed.

During much of Mike’s time in the reserves, he used his specialized training and expertise to Haverhill’s benefit.

He has worked at the city’s wastewater plant, in the highway department, at the water department, and for the past 11 years he has been Director of Veterans’ Services.

Michael Robert followed in his parent’s footsteps and spent five years in the Air Force as a helicopter mechanic, servicing the H-60 Black Hawk transport helicopters used by the Special Forces. Joseph is currently a police officer in Haverhill.