By Tom Duggan on June 8, 2006Comments Off on Heroes in our Midst – Christian Farnham, Captain Daniel Leary, Specialist Philip Brooks of North Andover 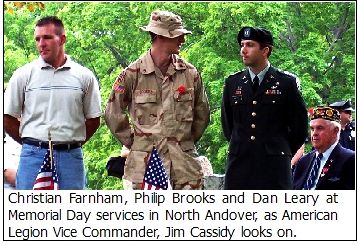 Spc. Christian Farnham began his military career in 1992 when he decided to follow the family tradition of enlisting in the Marines. His father and brother both served in the Marine Corps. Farnham said it was very important to him that he follow in their footsteps and serve his country. 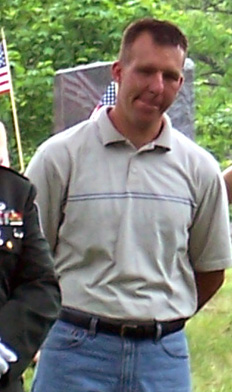 As a resident of Methuen, Farnham went to the United States Marine Corps Recruiting Station in Lawrence, signed up for the Marines, and was immediately shipped off to Parris Island, South Carolina for basic training. He was 20 years old at the time.

Following the completion of Marine recruit training, Farnham was given orders to report to Camp Edwards on Cape Cod. He was stationed there from 1992-1994 and eventually received an honorable discharge in 1994. However, he didn’t feel that he had completed his work with the military or his service to the United States.

So, in 2001, while living in Allenstown, New Hampshire, Farnham enlisted in the U.S. Army National Guard. He became part of the 744th Transportation Company out of Hillsboro, N.H., which also contained units from Claremont and Somersworth. The three units had between 90 and 120 Guard troops.

The 744th was activated in December of 2003 and Farnham was deployed to Iraq to assist our nation’s mission of fighting terrorists in the Middle East, and to prevent them from taking over a free, democratic Iraq.

Stationed at Camp Anaconda, about 35 miles north of Baghdad, Farnham’s mission was to operate a gun -truck vehicle for fire support through convoy escorts.

Farnham says that life was very difficult in the Middle East, and that they were being mortared all the time. They were also hit with RPG’s (rocket propelled grenades) and small arms fire on a regular basis. His first week in Iraq, Farnham says, the 744th lost one of their men when a convoy was hit by an IED (improvised explosive devise) and a truck flipped over.

Farnham says his most memorable mo-ment was when he was in the lead truck in a convoy of fire support vehicles. When the convoy reached Baghdad, he looked back and realized that the rest of his convoy had taken a wrong turn and was no longer be-hind him, leaving him alone and vulnerable to attack.

When he finally found the convoy heading down a different road, Farnham says he was able to backtrack and meet up with them once again. “I was very nervous,” he recalled.

Farnham served in Iraq until May of 2004 when he sustained severe hip injuries and was medivaced to Walter Reed Hospital. He underwent two hip operations that left him unable to continue his duties on the battlefield. Farnham received an honorable discharge in March of 2006.

Farnham now lives in North Andover with his wife and two small children. He says that the Iraqis seemed to appreciate the work of the U.S. solders and he was proud to serve his country. 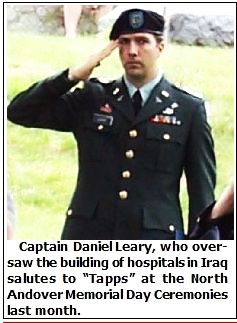 Captain Daniel Leary is a lifelong North Andover resident who was deployed to Kuwait as part of Operation Iraqi Freedom.

Leary began his military career when he joined the ROTC program while he was a student at Cornell University. He was commissioned in 1999 at the age of 22 and had been on active duty until February of 2006.

Leary’s first assignment was in South Korea. He was stationed in the Demilitarized Zone (DMZ), where he was the Platoon leader of the 2nd Infantry Division of the Medical Service Corp.

Leary was then transferred to Walter Reed Medical Center in Washington, D.C., where he received training in Health Facility planning. He was there from May of 2001 to October of 2002.

He was in charge of all troops and the administrative command. The job came with a great deal of responsibility, preparing troops for deployment to Iraq.

Leary was Commander of the Institute until February of 2002, when he was deployed to Kuwait for Operation Iraqi Freedom.

He was stationed there until December of 2005, and eventually left active duty in February 2006.

While in Kuwait, Leary was responsible for building medical clinics to support the coalition forces.

He designed and provided construction management for the clinics and managed contracts with foreign nationals who performed the actual construction. While there, Leary oversaw the building of 6-8 clinics.

Leary now lives with his wife in North Andover. 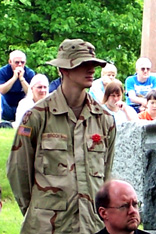 Spc. Philip Brooks also served in Iraq. Brooks enlisted in the U.S. Army National Guard in Danvers in 2005. His unit was deployed to Iraq in August of 2005, where he served until December of that year. Brooks served in the 1/102nd Field Artillery just south of Baghdad. This was a 150 member unit.

He was assigned to a security force at a prisoner detainment facility. Brooks could not say where the detainment facility was located. He also said he did not see much combat on his assignment, but knew that at any time he could be thrust into battle and had to be ready at a moment’s notice.

During training for the assignment, Brooks injured his right hand but refused to quit and went on to Iraq to serve his country despite the injury. He has since had surgery to repair his hand.

Brooks says that he’s glad he went to Iraq and that the Iraqi people, despite American media reports to the contrary, were grateful for the U.S. military presence and protection. Brooks said he supports the mission to secure Iraq from terrorists and so-called insurgents, adding that he saw many acts of kindness by American troops. He cited one example of U.S. military troops giving toys to the Iraqi children. “They were so happy. The expressions on their faces really said it all,” Brooks related.

Brooks is 26 years old and now lives in North Andover with his fiancée.

The Valley Patriot is proud to honor these Heroes In Our Midst for their service to our country and their dedication to combating terrorism in Iraq.

Captain Leary, Spc. Brooks and Spc. Farnham have shown by example the critical work that is needed to keep the United States safe by fighting the war on terrorism abroad.

Thank you, Captain Leary, Spc. Brooks and Spc. Farnham for putting your lives on the line to protect the American people. Americans appreciate the sacrifices you have made.