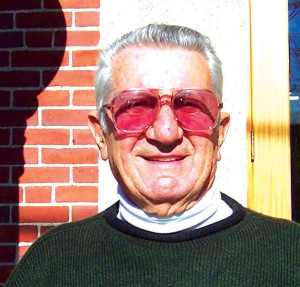 Immediately, President Harry Truman ordered General Douglas MacArthur to transfer ammunition and supplies from Japan to the ROK (Republic of Korea) Army and provide limited air support. On June 27th, Truman authorized the use of U.S. land, sea and air forces in South Korea. The newly formed United Nations also condemned this “act of aggression” and a week later placed the forces of 15 member nations under U.S. command to oppose the North Korean Army. President Truman appointed MacArthur as the Supreme Commander.

The U.S. 8th Army, stationed in Beppu, Japan, was rushed to South Korea to stem the invasion and assist ROK forces retreating to the southern tip of the peninsula. One member of the 8th Army’s 24th Division, 19th Infantry, was Frank Sanzi’s brother, Sergeant First Class Robert D. Sanzi. Sergeant Sanzi was a World War II infantryman who had decided to stay in the Army at the conclusion of the war. Now he was being sent into battle in a new war.

Shortly after Robert was sent to Korea, the Sanzi family received a telegram from the Army dated July 17, 1950 stating that their son was “missing in action” somewhere on the South Korean peninsula. The news devastated the Sanzis, but one member of the family decided to take action and do something about it. Frank Sanzi, Robert’s close brother, immediately told his father that he was going to join the service, get sent to Korea and look for his brother. The following day Frank went down to the Marine recruiter to sign up, but the Marines would not guarantee that Frank would be sent to paratrooper school, a requirement that Frank had strongly stipulated. But the Army was more than accommodating and promised Frank paratrooper training. And that’s where he signed his enlistment papers. 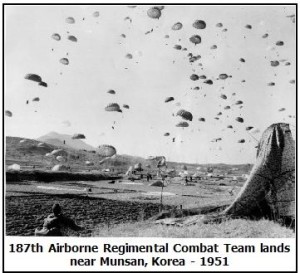 Within three days of the telegram’s arrival, Frank Sanzi had been sworn in and was on his way to Ft. Dix, N.J. for twelve weeks of basic training. From here he was sent to jump school at Ft. Benning, Ga. to train as a paratrooper. After three weeks of grueling physical instruction and jumping out of airplanes, Frank received his parachutist wings and was sent to Ft. Campbell, Ky. for further training as a member of C Company, 1st Battalion, 187th Airborne Regimental Combat Team (ARCT) of the 11th Airborne Division.

It was here at Ft. Campbell, in the late fall of 1950, that Frank volunteered to go to Korea. Two days later, while Frank was undergoing airborne training, a staff car pulled up and out stepped General James Gavin. The general approached Frank and explained to him that there was no further news about his brother. He then told Frank that he didn’t have to go to Korea because of his brother’s status as MIA. Frank simply told the general, “I want to find my brother.”

Two weeks later Frank Sanzi received orders to Korea with the 187th ARCT. After a brief leave to go home, Frank was sent to Ft. Lewis, Wash. and then was put on a plane to Honshu, Japan. This was the first time the military had used airplanes instead of transport ships to get its troops to a battlefield thousands of miles away. Frank remembers that the trip over was “first class.”

In late November of 1950, before Frank arrived in Korea, the Chinese had joined the North Koreans to counterattack General MacArthur’s brilliant amphibious landing at Inchon. The Chinese knew that the North Koreans would be quickly defeated without their help. The rejuvenated enemy forces began to push MacArthur’s forces back towards the 38th Parallel. 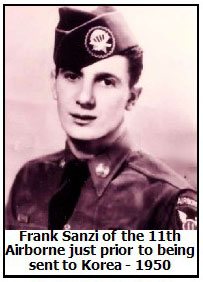 The paratroopers of the 187th ARCT had already made one combat jump on October 20, 1950 at Sukchan–Sunchon, about 20 miles northwest of Seoul. Frank Sanzi had arrived too late to participate in that jump, but was prepared for the next one.

That came on Good Friday, March 23, 1951 into an area known as Munsan-Ni near the 38th Parallel. This was to be part of “Operation Tomahawk.”

All went well until after the landing when Frank’s unit was ordered to take one of the nearby villages. At that point, Frank says, “All Hell broke loose!” Enemy soldiers poured into the area, backed up by mortars. The fighting was heavy with hand-to-hand combat as the G.I.s fought their way up a hillside. Frank Sanzi was right in the thick of the battle. As he moved forward, a North Korean or Chinese soldier caught Frank off guard and bayoneted him in the inner thigh. Frank recalls that the enemy had much longer bayonets on their rifles than did the Americans.

The enemy soldier took a step backwards and proceeded to finish Frank off with his bayonet. Wounded, Frank couldn’t get to his .45 side arm, but he was able – just barely – to raise his M-2 “sniper rifle” and fired off a burst that stopped the enemy soldier dead in his tracks.

Sometime later, after medics had initially treated Frank’s wounds – he also had picked up some shrapnel during the fighting – Frank was rushed by helicopter to an Army MASH unit behind the lines for emergency surgery to stabilize his injuries. From there he was transferred to a hospital in Sasebo, Japan for further care and recovery. He would eventually spend two months in the hospital, much of it to recover from some gangrene which had set in after the first operation.

At this point in his life, Frank was only 19 years old. But he was a battle-hardened soldier. So he was sent back to the 187th to fight once again. Several months later in September of 1952, with only one night’s notice, Frank Sanzi was asked to jump again into a combat situation. The target drop was Taegu.

Frank landed without incident and was proceeding along with the rest of the troops to the unit’s objective when Frank’s bayonet wound started to bleed. It had not healed completely as the doctors had thought. At this point, Frank’s commanding officer removed him from combat and sent him back for further medical treatment. Shortly afterwards, Frank was “permanently disqualified” from any further military jumps. 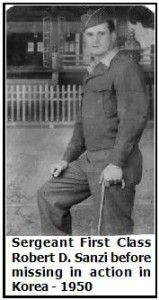 Because of the wound, Frank’s C.O. told him he could go back to the states and be discharged. But Frank wasn’t done looking for his brother yet. When the C.O. told him that he needed a truck driver to take ammo and supplies to the troops at the front, Frank quickly volunteered. Based out of Uijongbu, Frank started driving ammo and supply trucks up and around winding mountain roads seven days a week to bring the needed goods to American troops.

Frank would continue driving supply trucks until shortly before the end of the war when, in June of 1953, he was finally sent home. This time Frank traveled back to Seattle by slow troop transport, the USS Marine Adder (AP-193). Frank chuckles when he notes that the military was quick to send him over to Korea by airplane when it needed him most, but was just as quick to put him onto a slow boat back home when it no longer needed him.

The first thing that Frank did after getting home was go to the North End for spaghetti and meatballs. He sorely missed that old-fashioned Italian cooking.

Frank had spent two years in Korea and was no closer to finding out what happened to his brother than when he had left. That is, until he got home. When he arrived back home after the war, his father told him for the first time that his brother’s body had been located by the Army approximately a year after he was listed as missing in action. Robert’s body was subsequently sent back to Boston and he was buried in Forest Hills Cemetery in Jamaica Plain. During the entire time Frank was in Korea, his parents had never told him that his brother had been found. His father explained to Frank that with all the stress he was under in Korea, the family didn’t want to burden him with the news that his brother had been located. Frank still regrets to this day that he was not at his brother’s funeral.

Sergeant First Class Robert D. Sanzi would eventually have a VFW post in the South End named in his honor and to this day Castle Square in Boston is also sometimes referred to as Sanzi Square.

Frank settled back into civilian life after the war and went to work for his father in the furniture antiquing business, eventually starting his own similar business. That last-ed until 1967 when Frank decided he wanted a little more excitement in his life and joined the Merchant Marine. After only three weeks of training, Frank was certified as a mariner on Group 4 fuel ships. As one who is now used to danger, it is not surprising that his first assignment was on a gasoline tanker delivering fuel to Vung Tau, Vietnam during the Vietnam War. Shortly after that harrowing trip, he switched to tugboats out of East Boston. He worked on the tugboats for 13 years until he retired in 1991.

In the early 1960s, Frank was introduced to Suzie Bouchard by a family member in Charlestown. Frank asked her for a date the following night, but on his way over to her place his car broke down and he never made it. He called her the next day and fortunately she forgave him and they rescheduled the date. On November 11, 1961, Frank and Suzie were married at St. Catherine of Siena church in Charlestown. This Veterans Day will mark their 45th wedding anniversary.

The Sanzis have three grown children: Dianne, Daniel and Francesca; and five grandchildren. Daniel would eventually follow close in his father’s footsteps. He became a Marine and as part of the 2nd Marine Division fought in Operation Desert Storm in Iraq in 1991. He is currently a firefighter in Lawrence, after having worked previously as a firefighter in North Andover.

Frank is a lifetime member of the Disabled American Veterans. Frank was awarded the Purple Heart and other campaign medals from the Korean War. However, he never accepted or received them, explaining that the Purple Heart reminded him too much of his brother’s tragic death on the battlefield.

Corporal Frank Sanzi, we thank you for your service to our country.

Final note: Frank would like to dedicate this column to “All the boys who are overseas in Iraq.” He adds, “I think about them often.”