By ValleyPatriot on April 4, 2012Comments Off on Heroes in Our Midst: Cpl. Tony Lutz and George Lutz

VALLEY PATRIOTS OF THE MONTH 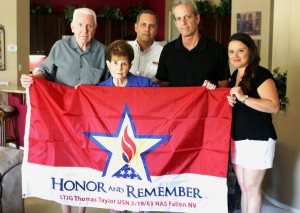 When 25-year-old Corporal George A. (Tony) Lutz, II, U.S. Army, of Virginia Beach, VA, was killed by a sniper’s bullet outside Fallujah on December 29, 2005, only six weeks into his deployment in “Operation Iraqi Freedom,” his tragic death set in motion a series of events nationwide that no one could have foreseen. Least of all his heartbroken family.

This is, in part, the story of Tony and his legacy, his passion for God, America and family. It is also the story of Tony’s father, George A. Lutz, Sr., who, in his grief, reached out to comfort other military families with the comfort he himself received.

Above all, it is a compelling story of healing—and hope. Of death swallowed up in victory.

The father’s journey began simply. Soon it turned into a mission. Now it’s become a nationwide movement. On Memorial Day 2008 George Lutz launched the national non-profit Honor and Remember Inc. (www.honorandremember.org), and unveiled publicly the Honor and Remember Flag, designed to be a national symbol of remembrance for all military who died in defense of our nation’s freedoms, whether in combat or not. It pays tribute to heroes from all wars, even as the POW-MIA flag honors those captured and missing.

George Lutz took his mission to all 50 states (2010), to Congress (2011) where 153 members co-sponsored HR 546 in its support. (You can sign a petition of support on the website.) Several Congressional offices display the flag. Lutz also appeared on Fox News, CBN, CNN and Dennis Miller’s radio show.

“Today we have the largest number of living veterans of any time in our history,” George Lutz says. “These fallen are among the least honored in our history, from Vietnam and Korea. We cannot let them be forgotten.”

Two years ago, George Lutz drove cross-country visiting each state capital and meeting with governors, state legislators, businessmen and citizens to establish support for the flag. He covered 29,000 miles in 5 and one-half months. His journey began June 7 at CBN, with first stop Dover, Delaware. It ended November 11, Veterans Day, in Arlington National Cemetery, where his son Tony is laid to rest. Last year, he took his mission to Congress, visiting all 541 offices. Today he continues to travel around the country presenting personalized flags.

Twelve state chapters, including New Hampshire, now promote the flag and its mission.

The flag flies at professional sporting events, including NASCAR. The newest sponsor, American Majority, a leading national conservative grassroots movement, displayed the flag for the first time at the nationwide series Bristol, Tennessee, race on its #81 MacDonald motorsports car. The flag now flies at several tracks across the country.

This movement has captured the heart of the nation and is well on its way to becoming a national symbol of remembrance.

“Tony was a fearless soldier who supported the war in Iraq 100%,” George Lutz told us. “He looked forward to his mission, which he felt was his calling from God.” He told his dad, “God is literally my shield.” The day before he was shot, Tony said, ‘I’m not afraid to die. I know where I’m going.’ And he talked openly about his faith and heaven.”

For Tony’s dad, George Lutz, the loss was devastating. “For months I was numb with grief. Until one day the Lord broke through to me with the words, ‘Your son is with Me.’ That was the turning point.

“I was grieving as a father grieves on losing his son. Then I thought about God sending Jesus to die for us. And I felt as if God were saying to me, ‘I know what it feels like because I did it. I sent My Son, and it hurts. I know it hurts but I did it.’ This just gave me a peace.”

From then on, George Lutz began attending funerals of veterans from WWII, Korea, Vietnam, Iraq and Afghanistan. He visited with their families, giving comfort and hope. Invariably, two questions repeatedly cropped up:

“Will people forget the sacrifice made for freedom?”

“Those words ‘in vain’ bring a lot of hurt to a lot of people, especially from wars like Vietnam and Korea,” Lutz said. “I thought about that a lot. The American flag symbolizes the price of freedom and unites us as a nation. The POW-MIA flag honors a very special group. Yet we have no official national symbol of public gratitude for those who died defending our freedoms.”

This led George to design a unique flag for this forgotten group, using military symbolism. The red stands for the blood shed by our military throughout our nation’s history. The white recognizes the purity of that sacrifice. The blue star recalls the World War I symbol hung in windows indicating a family member away at war. The gold star symbolizes the ultimate sacrifice of the fallen hero who will never return. The folded flag signifies the final tribute given the family. The flame reminds us of the hero’s eternal spirit living on in the memory of loved ones.

Lutz has presented more than 700 personalized flags to veterans’ families from WWII to Afghanistan, with nearly another 1,000 waiting. Each personalized flag bears the veteran’s name, date and country where he was KIA. Each presentation is always a public ceremony to honor the fallen. Last April the Louisiana Governor publicly presented 60.

Healing has begun for families once imprisoned in grief: the widow who had tried to commit suicide, the elderly couple whose only son died in Vietnam unacknowledged in 40 years, the five Navajo Indian families on a remote reservation. George Lutz reached out to others with the love of God, and found healing himself. Hymn writer F.M. Lehman wrote, “The love of God is greater far than tongue or pen can ever tell. It goes beyond the highest star and reaches to the lowest hell.” Scripture records, “God so loved the world that He gave His only begotten Son…” (John 3:16). The apostle Paul declared, “Who shall separate us from the love of Christ?” Neither “tribulation…death nor life” (Romans 8:35-39).