By ValleyPatriot on March 22, 2020Comments Off on HEROES IN OUR MIDST – Don Silba, Joseph Augusta, Joe DiZoglio, and the Vets at the Lawrence DAV! 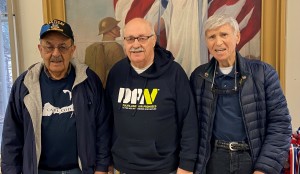 Meeting Don Silba, Joseph Augusta, Jim Moran, Joe DiZoglio, and the other US Military Veteran members of the Queen City Chapter 2’s Service Center at the Lawrence Disabled American Veterans was an eye-opening experience. I stopped by their Lawrence Office at 112A East Haverhill Street, in Lawrence’s Prospect Hill neighborhood a couple of mornings before work this month for coffee and donuts. What surprised me the most, was the number of young Veterans waiting in their office for assistance in the early morning hours. A young, twenty-something Veteran was there on one of my visits; he was very happy that Coast Guard Veteran Don Silba had just helped him navigate the complex Veteran’s Administration’s paperwork.

These men and women are all Volunteers, unpaid, spending hours each week, filling out paperwork, making phone calls, always reaching out to their fellow Veterans, and working on behalf of other Veterans. Founded in 1922, the Queen City chapter of the Disabled American Veterans has around 525 members. These men and women served in World War II, Korea, Vietnam, the Cold War, the Gulf War, in Iraq, in Afghanistan, and during smaller conflicts such as El Salvador, Grenada, Panama, and Somalia.

The men and women at the Lawrence DAV have a laser focus to help all Veterans, of all eras, of all branches, anywhere, anytime. We had an interesting conversation about ear plugs, burn pits, and the Cold War. Our Veterans of the Cold War era are often overlooked, finding themselves ineligible for benefits, despite injuries, exposure to harsh chemicals, and long deployments to undeveloped countries while serving during the Cold War.

What was the Cold War? For two US Navy Crews, the war was not all that “cold”. In 1967, the USS Liberty (AGTR-5) was a Belmont-class technical research ship, basically an electronic spy ship. She was attacked by the Israeli Defense Forces during the 1967 Six-Day War. Attacked by several Israeli aircraft, resulting in the killing of thirty-four US Navy Sailors, while wounding another one hundred and seventy-one of her crew. The ship was also severely damaged.

Another Cold War incident was the attack by North Korea on the USS Pueblo (AGER-2) with its crew of six officers and over seventy enlisted sailors on January 22, 1968. Lightly armed with only a pair of .50 caliber Browning machine guns as her heaviest weapons, the ship and her crew were captured by the North Koreans, with a Navy Sailor, Fireman Duane Hodges, killed by gunfire from the North Korean vessels.

The US Navy’s Seventh Fleet monitored the situation, but like the Japanese attack on Pearl Harbor years earlier, United States political leadership and the Navy Brass left the crew unprepared for action. The .50 caliber guns were wrapped in burlap, the ammo was stored far below deck, and only one sailor, a US Army Veteran, who joined the Navy after his Army service, was properly trained to fire the machine guns. The ship’s crew was held by the North Koreans for nearly a year, even our own US Congress did not allow them to be considered POWs until 1990, over twenty years after they had been released by North Korea.

Their ship is still moored in North Korea, still on active duty. Many of the crew suffered for years due to injuries from their mistreatment by the North Koreans. Several died very young, passing a few years after being released.

Highlighting stories of the USS Pueblo and the USS Liberty, I am hoping to illustrate to the Valley Patriot readers, just how dangerous peacetime service can be for our nineteen-year-old sailors, soldiers, airmen, Marines, and Coast Guardsmen. Further examples of attacks on US Military personnel during peacetime, during the Cold War, are too plentiful. I could also have used the attack on the USS Starke on May 17, 1997 by Iraqi forces;or the December 3, 1979 attack on a US Navy Bus by Puerto Rican terrorists, killing two US Navy Sailors, and injuring another ten, including three young women. All the Sailors on the bus were unarmed, the Puerto Rican terrorists used stolen M16 rifles to attack the bus.

Recently, I discussed the Cold War with a civilian, a man who never served himself, he stated, that he did not consider these men and women “real veterans”! During my own relatively short, Military career, I personally knew a Navy Electrician who was electrocuted and killed during the Hurricane Hugo Recovery in Puerto Rico, a US Marine with a young wife and family, killed while maintaining a minefield in Cuba, and a US Navy Diver, killed by Muslim terrorists on a TWA commercial flight out of Greece, he was out of uniform, and unarmed, flying home from a deployment to Greece. These three American heroes died serving their nation, how can a civilian or a politician not call them “Veterans”? More importantly how can they and their families be denied Veteran’s benefits?

The men and women who volunteer at the Lawrence DAV understand this, and are adept in navigating the forms, phone calls, and appointments required to assist all Veterans. The men who waded ashore on June 6, 1944 at Normandy, deserve their Veteran’s Benefits, the men and women who worked six and seven days a week, often 12 to 16 hours a day, at the Pentagon during our Nation’s wars, deserve their benefits, and the nineteen Sailors who were ambushed by Puerto Rican terrorists while riding on a bus in December of 1979, also deserve their benefits.

US Coast Guard Veteran Don Silba, US Navy Veteran Jim Moran, and many others at the Lawrence DAV are rolling up their sleeves and providing our Veterans with the assistance they need in obtaining these hard-earned benefits. Lawrence DAV Commander Joseph Augusta took me on a tour of their office in Lawrence, showing me the medical equipment stashed in every available space, ready to be issued to a Veteran in need.

The easy smiles, and the subtle enthusiasm of these heroes is contagious. If you served, or never served in the US Military you still can help the Lawrence DAV! How? This spring, I challenge every Valley Patriot reader to brown bag their lunch for a couple of days at work, and with their savings, send a small check made out to the Lawrence DAV, PO Box 374, Lawrence, MA 01842.

If you’re a Veteran, or a widow of a Veteran, stop by on a Monday morning and introduce yourself to these “Heroes in Our Midst”; bring some Heavn’ly Donuts!

The Dracut Veteran Services Officer asks all Vietnam era Veterans who currently live in Dracut to contact him as soon as possible at 978-455-1349. The Dracut American Legion asks all World War II and Korean War Veterans to call 603-518-5368 and sign up for an Honor Flight to the Memorials in Washington DC!

John Cuddy served in the US Navy’s Construction Battalions (also known as the Seabees) after retiring from the Navy, he earned a bachelor’s in history and a master’s in economics from the University of Massachusetts on the Lowell Campus. He has been employed in Logistics at FedEx for the last 23 years. If you know a World War II veteran who would like their story told, please email John.Cuddy@Yahoo.com. ◊