By ValleyPatriot on October 1, 2014Comments Off on HEROES IN OUR MIDST – Jake Collins, MERCHANT MARINE 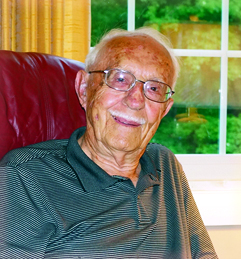 I had the pleasure recently of sitting down and talking with Jake Collins, this month’s Patriot of the Month. Mr. Collins served in the Navy during World War II as a Gunner’s Mate aboard the USS AOG-17 named the USS Mettawee.

The Mettawee was a gasoline tanker that was used to deliver precious aviation gasoline to places like Guadalcanal, Bougainville, the Solomon Islands, and Funafuti. Mr. Collins explained to me that this was a tanker originally designed for civilian use, but due to the massive need of men and equipment at the start of the war it was quickly converted for use by the US Navy. It had a cargo capacity for fuel of 750,000 gallons and had six gun emplacements to protect herself. Mr. Collins’ job was to man the three inch 50 dual-purpose gun mount on the fantail of the vessel.

Think about this for just a minute, Gunner’s Mate Collins and 61 other men were riding around in the Pacific to some islands that were not known to be calm places, like Guadalcanal, in what can only be described as a floating bomb. The fuel they carried was for aircraft and as a result this was a ship that the Japanese had an intense interest in taking out of the logistics chain.

The now 92-year old Mr. Collins and I discussed this at length. We are both veterans of the Armed Forces (although I was Army, and much more recently). There is an aspect of the combat soldier’s life that not a lot of people who haven’t been in the military just never think about (not that there is anything wrong with that). Logistics, and supply are keys to successful combat operations.

It is very simple. Think about the job of this ship. It was to deliver airplane fuel to these islands that were constant hot spots for fighting the Japanese. If this precious fuel does not arrive to those islands, those airplanes do not take off. If those fighter aircraft don’t take off that means that the Japanese could bomb the Marines on those islands without mercy, and they would have.

As a result the Japanese with their submarine community or fighter/bomber aircraft would want to destroy if they could. Destroying this ship would not only take out 750,000 gallons of airplane fuel but also degrade the US military’s ability to resupply the aircraft in the region. That made this vessel and her crew a highly strategic target for the Imperial Navy.

That made Mr. Collins’ job all the more important. His job was to man the guns on the rear of the ship and ensure that no enemy fighter/bomber aircraft, or ships come up and do harm to this vessel and her crew. Mr. Collins himself was at his gun one day during the war when a Japanese Zero came straight at his ship flying very low to the water, making it a tricky shot to get off. The Zero was thankfully destroyed a few hundred yards from the AOG-17, allowing her and her crew to make delivery of their precious cargo.
I asked Mr. Collins if there were any events that stuck out in his mind after all these years. He did, after all, spend several years of his life on this ship. He said, and I agree, there could be a book written about it, but I thought I would highlight just a few.

When part of the way to a destination island to pickup more fuel the steering on the ship failed. They had no repair or replacement parts to fix it at sea. What the crew had to do was to use the communication system on the ship from the bridge to where the rudder could be reached to have the Captain send down orders on which way to turn. The men would then go and manually turn the rudder according to the Captain’s instructions.

Sure…on a rowboat. This ship when full with fuel had a displacement of 2,270tons. These men had to literally throw their backs into moving a rudder against the water and the momentum of the ship to turn it as needed. The men would work four hours shifts in teams of six to accomplish this task. According to Mr. Collins recollection every time he pulled that duty he would instantly go back to his bunk and pass out exhausted, covered in sweat.

On another trip Mr. Collins had a story that in the Army we would have called a SNAFU (it is an acronym well worth Googling if you don’t know what it is.) When they filled up with crew supplies on a trip to one of the islands one of the water tanks that the crew would use for drinking water was half filled with gasoline, then someone at the filling port realized the mistake and started loading water…without removing the gasoline or cleaning the tanks. That means that a good half of the fresh water supply for the journey was gone. The men got creative on the deck on rainy days to save water using the natural shower to bath, clean clothes, and other parts of life that one would use fresh water for. Now that is American ingenuity at work!

Mr. Collins did say he was glad he wasn’t the first one to try to drink that water, as the person that did turned green before spitting it out.

He had many more stories about his time on this vessel ranging from when a Japanese bomber passed directly over head to a trip to Lai Tai Harbor to refuel some airplanes that were aiding the Australian military while they were engaged with the Japanese.
All of those stories and instances are well worth a column of their own. But I would feel as though I missed something if I didn’t say that Mr. Collins had a girlfriend he corresponded with the entire time he was gone. She was a radio instructor in the Army. They were eventually married and remained so for over sixty years. They had a very interesting hobby they shared.

They would deer hunt together. That isn’t something too many married couples do any longer. I asked him when he stopped deer hunting (remember he is 92 years old).

His answer is all you ever need to hear to know what kind of a man this is. He is someone who will never quit, no matter what. He told me 4 years ago. When he was 88 years old. I was astonished I said really? What finally made you quit? His answer shocked me even more. He said, “Too many of my friends have died and I can’t eat the whole deer myself.”

In other words he would, and by the look of him could, still go out today and enjoy that hobby.

I think people like Jake defined what made the United States during and after the war. He is the type of person we need more of, and someone I strive to be much more like. I want to thank Mr. Collins for taking the time, and I wish him many more years to come. I fully expect to hear from him for years to come.

Tim Imholt is the author of several historic fiction novels including a series about a Marine in the Pacific during WW2 called China Bones available on Amazon.com.