By ValleyPatriot on March 5, 2007Comments Off on Heroes in Our Midst PART 1 – Methuen’s Thomas Patrillo – US NAVY WWII 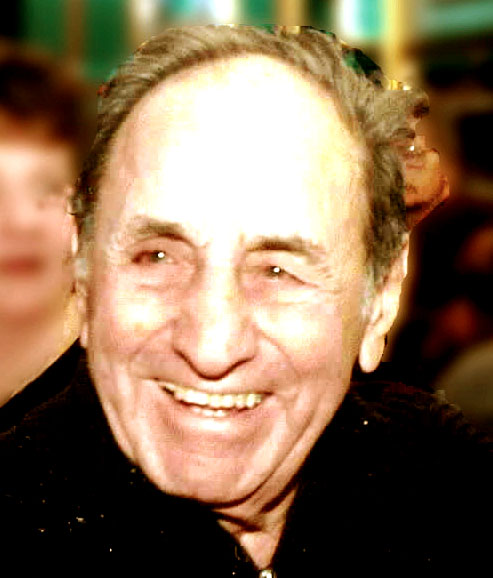 METHUEN – Sixteen million Americans served in World War II. Only a fraction of this number saw action in both the European and Pacific Theaters. And only a handful of those served on both a battleship and an aircraft carrier.

This brings us to Seaman Tom Petrillo, who served on the Battleship Massachusetts during the 1942 landing in North Africa and later aboard the Escort Aircraft Carrier St. Lo in the Philippines.

On October 25, 1944, the St. Lo became the first U.S. ship sunk by a Japanese Kamikaze airplane. That day, five out of 13 ships in St. Lo’s Taffi 3 Task Force would be sunk by a superior Japanese naval force which surprised the Americans in the Battle off Samara. Tom Petrillo, badly wounded, would spend most of that day in the water before being rescued by the Destroyer USS Raymond. One hundred and twenty eight of his shipmates were not so lucky and perished at sea.

Thomas J. Petrillo was born in 1917 and grew up in the Pleasant Valley section of Methuen. In 1934, in the midst of the Great Depression, he left the public schools to work at his brother’s store, Al’s Grocery, to help out the family. Some years later he would learn the carpentry trade from his father. By 1940-41 he was building apartments in Portsmouth, N.H.

On December 7, 1941 Tom was with his father at work when the radio announced that the Japanese had bombed Pearl Harbor. The following month Tom received a letter from Uncle Sam ordering him to report to Ft. Devens on March 1st for induction into the Army. One week before March 1st, Tom went down to the post office in Lawrence and joined the Navy instead. He just couldn’t picture himself slogging through the mud and dirt and eating cold rations all the time.

On March 31st Tom reported to the Navy in downtown Boston for the mandatory haircut and physical. The next day he was sent to the Naval Air Station in Newport, R.I. for five weeks of basic training. Completing his basic, he was then ordered to South Boston to become part of the crew of the newly completed battleship USS Massachusetts (BB 59). 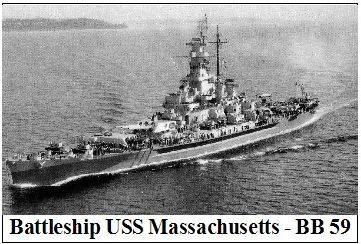 The Battleship Massachusetts, called “Big Mamie” by its crew, was built by the Bethlehem Steel Co. at the Fore River Shipyard in Quincy, Mass. She was delivered to the Boston Navy Yard in April of 1942 and commissioned the following month on May 12th. She was 680 feet long, displaced 35,000 tons and could travel at 27 knots. Her armament consisted of nine 16″ guns, twenty 5″ guns, twenty-four 40 mm guns and thirty-five 20 mm guns. The ship had a complement of 2200 enlisted men plus officers.

Seaman Tom Petrillo was assigned to be a shellman or shell loader on one of the 5″ guns. It was his job to load the shells into the breech just ahead of the powder charge. Each shell weighed between 64 and 74 pounds, depending on type. There were three types of shells: anti-aircraft, armor piercing and explosive.

At this point in his service, Tom was being paid $21/month. Out of this he had to pay for insurance, haircuts and other miscellaneous items. He says there was only enough left over at the end of the month for about two beers.

For the first two or three months, Tom and the rest of the crew practiced their jobs while the ship stayed dockside. Then, finally, they went to sea. He remembers sailing up off the coast of Maine for gunnery practice. Some days ships would tow targets far behind them for the gunnery crews to shoot at. Other days it was airplanes towing drones for aerial target practice. All this would be put to good use in the coming months. Tom says that with perfect timing the gunnery crew could get off 60 rounds a minute with the 5″ gun. 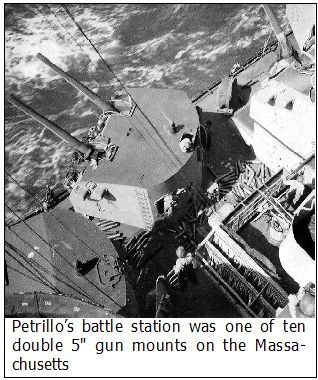 Then, on October 24, 1942, the Massachusetts left Casco Bay, Maine and headed south to rendezvous with the ships of the Western Naval Task Force. BB 59 was to become the flagship for Admiral H. Kent Hewitt as the task force head-ed east for the Allied invasion of North Africa. Known as Operation Torch, this was the first landing of American troops in the European Theater. General George Patton was in command of the American GI’s as they opposed the Vichy French – then allies of the German Army.

The Massachusetts then opened fire on other ships trying to flee the harbor. It sank two de-stroyers, two merchant ships, a floating dry dock, and destroyed shore bat-teries including an ammu-nition dump. During all this action, the Massachusetts was hit by four shells, but, fortunately, there were no injuries to the crew. At 2300 hours the night before the battle, Tom remembers that he and the crew were fed a steak dinner. He spent the night in the gun mount preparing for action. However, he did get a break to attend Mass early the next morning before the battle began.

By late on November 8th the shooting had ceased and that night the Massachusetts headed back across the Atlantic to Norfolk, Va. to take on a new supply of ammunition. While docked there, half the crew from the southern part of the country was given a one-week leave. Then the ship headed north to Boston to repair the damage it incurred off Casablanca. Here, also, the half of the crew from the northern part of the country – including Tom – got a one-week leave.

In Decem-ber of 1942 the Massachusetts left Boston and headed north for two days of trials off the coast of Maine. Then it turned south towards the Panama Canal for eventual action against the Japanese in the Pacific. It took two days to traverse the canal and Tom remembers it well. He says the Massa-chusetts was so wide that it brushed the sides of the locks and the crew had to hose down the contact points to promote slippage and thus prevent any damage.

Halfway through the canal, the ship an-chored in one of the canal’s lakes for the night. Tom remembers natives coming out in canoes selling bananas for $1 an entire bunch. You lowered a rope to the canoe and the natives would tie bananas to it. The money was transferred in the same way. Some sailors would throw coins into the water and watch the local natives dive for the money.

After leaving the canal, the Massa-chusetts headed out into the Pacific. On March 4th, 1943 the ship arrived at the French island of New Caledonia. The harbor at Noumea was horseshoe shaped with two ships on either side of the entrance. They would open and close the harbor with a submarine net as ships entered or left the naval base. The Massachusetts joined a fleet of carriers, cruisers and destroyers. It was the only battleship present.

Tom says the residents of Noumea were friendly. They spoke French and Japanese. You could go ashore and buy lemonade and fresh fruit. The town also had a local place called the Pink House where ladies would “entertain” the troops. Tom says the Army soldiers from a nearby camp were always lined up at the entrance to get in. The Navy, however, had commandeered a nearby island and set up baseball fields, picnic tables and other recreational pursuits. When the Massachusetts was in harbor, a third of the crew would be rotated to the island every third day for R & R. The sailors would come to call this island their Shangri-La.

During the period Tom was at New Caledonia, the Battleship Massachusetts’ primary task was to shell Japanese installations on the islands before our troops made an amphibious landing. He says there were many such small islands and landings as the U.S. Navy and Marines started reclaiming the South Pacific from Japanese forces.

The Massachusetts would usually join with several cruisers and 4-5 destroyers on these missions and be gone for 2-3 days. The ship would then rendezvous at a designated meeting place and await the next invasion order.

By now it was the summer of 1943 and Tom had been on the Massachusetts for sixteen months. While docked in New Caledonia one day, an announcement suddenly came across the intercom. It listed 109 sailors and said they had one hour to get their things together and disembark from the ship. They were to return to the states for a new assignment. Tom Petrillo was on that list.

He and the others were put on a Merchant Marine ship headed back to San Francisco. When he arrived he had leave and so took a train across country to visit his folks. In September of 1943 he was back in Methuen for a brief stay. Then he was told he had 21 days to report to Naval Station Bremerton in Washington state for his next assignment. That would be aboard the USS Midway, an escort aircraft carrier just being completed in the nearby Kaiser Shipyard.

In next month’s continuation of Tom Petrillo’s story, we will see how the USS Midway became the USS St. Lo and how it was sunk off the Philippine coast in the Battle off Samara.