By ValleyPatriot on June 28, 2017Comments Off on Heroes In Our Midst ~ SUSAN PIAZZA’S BOOK REVIEWS 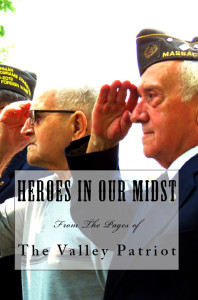 Since the first edition of the Valley Patriot back in March 2004, this newspaper has published a monthly feature on local veterans titled “Valley Patriot of the Month, Heroes in Our Midst”. The lives of over one hundred veterans from WWII to the present Afghanistan and Iraqi Wars comprise this book.

As the newspaper articles in this book are written by different people with different styles, this is not a review of writing but rather a review of content. It should also be noted that according to the year the person is written about their piece could be either a few paragraphs or a two-part column. The length is more a matter of how this column progressed over the years rather than a commentary on the person highlighted.

All the articles are interesting. I have chosen a few individuals to mention here as an example of their importance.

Mike Beshara, WWII veteran, (Sept 2007 issue) worked with drones. While I knew Joe Kennedy, President John Kennedy’s older brother, was a pilot and died during WWII, I never knew the whole story. It appears, according to Beshara, that Joe Kennedy and a man he refers to only as Whiley, another volunteer, were arming explosives for the drone when something happened causing an explosion. Kennedy and Whiley were instantly killed.

Gerald Halterman, WWII veteran, (Nov 2013 issue) witnessed the attack on Pearl Harbor, he spoke of seeing the “… USS Oklahoma, taking nine torpedoes. It capsized in 8 to 12 minutes, taking 429 men to their graves, including my three closest buddies.”

Sergeant First Class Christine LeCain (June 2004 issue) served as a mental health counselor. She received the Bronze Star while serving in Iraq during Operation Iraqi Freedom. As of the issue date she was still in the military.

Unfortunately, what we are privy to are but snippets of the written about lives. While this book gives us a glimpse into the inner workings of the individual, it left me wanting more.

Some veterans have written books. Ssgt John Katsaros, WWII veteran, (Sept & Oct 2011 issues) is the author of Code Burgundy. John was the recipient of France’s highest honor – Legion of Honor: Chevalier. “His espionage uncovered: Hitler’s top-secret weapons … the Ho 2-29 stealth bomber (600 mph at 60,000 ft.) that could fly undetected by radar from Berlin to NYC and back without refueling-carrying the Atomic Bomb before we had it!”

We walk by people every day never knowing their stories, never knowing how truly special they might be. This book peels back the cover on area veterans to reveal true heroes.

One theme that runs throughout these interviews is that service did not end when these people left the military. They each continued to be a credit to their community volunteering in ways that were important for each of them.

Many of those that have been featured in Tom’s pages are no longer with us. It is a blessing and a real public service that Tom Duggan and his Valley Patriot newspaper has archived these historical lives. These people and what they did for this country during their military careers and afterward should never be forgotten.

If not for Duggan and his newspaper these incredible individuals might be lost to time.

I highly recommend this book.

Susan Piazza is the first female commander of the DAV in 75 years, and its current commander. She has been involved with the DAV over twenty five (25) years. She is also Past Commander of the American Legion Post 417, Methuen.

EDITORS NOTE: Valley Patriot publisher Tom Duggan will be holding a public book signing at the North Andover Farmer’s Market at CVS Plaza on July 8th and July 22nd on Main Street from 10am -2pm.