By ValleyPatriot on April 26, 2021Comments Off on Hidden Battle Foundation ~ KANE’S CORNER 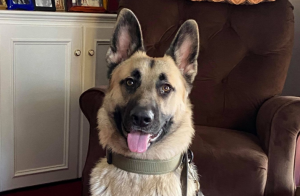 Kane was excited to score an interview with Scott Hyder the Director of Hidden Battle Foundation and Social Media Director Christopher Hurst. Kane follows their social media page “Hidden Battles” on Facebook. This page features many helpful articles, supportive research, and motivational stories about the needs and tireless work of veterans and first responders in our community. So, let’s dive in to learn what the Hidden Battle Foundation is all about.

Hidden Battles Foundation raises public awareness of the unique struggles experienced by returning military members to civilian life, police officers, firefighters, correction officers, and first responders. What else do they do? Well, they provide the best type of support possible, a sense of community and belonging for these unique individuals that answer the call to serve their country and local community. Our community relies on these important individuals to preserve our freedom, public safety and emergency care.

Kane has much respect for our local public servants and military members who often put themselves in harm’s way to protect the freedom: safety and health of others. Kane thought all beings need to feel they are part of a community of like-minded individuals. He has made lots of friends over the past year in his neighborhood.

Kane is hopeful our fellow Americans are aware of the high suicide rates and internal struggles experienced by veterans and first responders stemming from the trauma experienced by performing the necessary tasks of their vocation. The identified causes of these deaths and struggles stem from mental health challenges including Post Traumatic Stress, job related stress, traumatic brain injury and the struggle to reintegrate back into daily life.

As Kane knows from spending some time working at a Mental Health practice, trauma can be stored in the brain in a manner that affects the everyday living of those who experienced it. Aspects of the past may be experienced in the present. Hidden Battle helps preserve the Healthy Mind of the Participants by creating a “Buddy System” of other veterans and first responders who have had similar experiences partnered with civilian organizations who support the journey of preserving the healthy mind through connection and the purpose of spreading awareness.

Kane learned through Scott and Chris that Hidden Battles builds a supportive community for participants by connecting through activities. The connection happens naturally by working on a joint task, conversations with people who have had similar life experiences, and jointly supporting and helping others. Kane understood that the pace of developing connection is self-driven.

Participants can share experiences with others if they desire or just enjoy the process of a joint task. Helping others creates a sense of purpose and satisfaction that easily attaches to the feel-good components of the brain.

Kane was excited to learn that Hidden Battles encourages and welcomes family participation. A very popular activity has been cooking classes for couples. In fact, there will be a May 8th and June 12th class this year. Besides the benefit of doing an activity, like cooking as a couple, family members have the opportunity to connect with other veteran and first responders’ families. Chris and Scott reported even if cooking isn’t your thing, it’s more about the opportunity to have fun with other couples. Other activities include family movie and date nights. The next movie date night is scheduled for April 17th at Chunky’s in Nashua. Kane doesn’t know how to cook, but he does like to eat. Sometimes he eats food he isn’t supposed to have, but to be honest it’s worth getting in trouble even if it is in the trash. He doesn’t know what the big deal is that humans don’t want the food in the trash anyway.

Another important activity that Hidden Battles hosts is the 22 for 22 Ruck held this year on May 22nd at Newfound Lake in New Hampshire. Participants are encouraged to ruck with 22 pounds in the Ruck Sac to represent the 22 veterans that take their lives daily. Participants have the option of a 5k, 10k or 22-mile Ruck. Fundraising is an option for this event. Kane knows it is of utmost importance to spread awareness of the struggles of our returning veterans. Feeling comfortable reaching out for support and connection cannot be emphasized enough.

Kane wants his readers to know about other upcoming events hosted by Hidden Battles including a Corn Hole Tournament at the Bunting Club in Lowell on September 25th. Since Kane doesn’t have any thumbs, he wasn’t sure if he could play this game but that won’t stop him from going to hang out with his peers. Also, on July 17th Hidden Battles has a kayaking day on Newfound Lake. Kane isn’t a big swimmer but he certainly likes hanging out knee deep in water watching for some lady pups on the shore. He has never been in a boat before but he thinks it looks pretty cool.

In conclusion Kane reminded himself that beings are most healthy when they do not isolate and feel they belong to a greater community. People gain strength and energy from helping others and working collectively in groups. A group can be a family, biological or not. Hidden Battle provides an opportunity for members of our law enforcement and veteran community to continue the important bond they developed during their years performing the requirements of their profession.

If you would like additional information on donating to Hidden Battles financially, volunteering your time, or participating in activities please contact the Hidden Battles Foundation at hiddenbattlesfoundation.org.