By ValleyPatriot on March 22, 2020Comments Off on ‘High Fidelity’ ~ TV TALK with BILL CUSHING 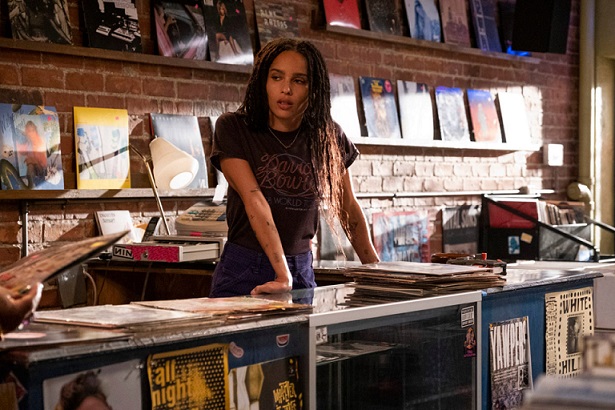 I’m a huge fan of the 2000 film ‘High Fidelity’ starring John Cusack about a music lover and record store owner recounting his five worst breakups. So when I heard they were remaking the story for a Hulu series, I was very skeptical.

In this version, Zoe Kravitz takes over the Cusack role as Rob. Rob fears commitment, is fixated on the past, and can be highly self-motivated. She is the owner of Championship Vinyl, a sparsely attended Brooklyn record shop. Rob (short for Robin) is still reeling from a relationship with her fiancé that ended a year ago when he moves back to town and she runs into him on the street. Rob is desperate to know why all her breakups have been so hard, even the boyfriend she had for only 3 days in middle school, and she proceeds to name her top 5 breakups.

‘High Fidelity’, much like in the film, breaks the fourth wall. Meaning that the characters, mostly Rob, talks directly to us, to tell the story. Also, much like in the film, there are 2 other record store employees. In this iteration, they are Cherise (Da ‘Vine Joy Randolph), and Simon (David H. Holmes) and they lend their own life experiences to help Rob, including crafting their own top 5 lists.

The show is produced so beautifully too, from the soundtrack to the great shots of the city and the title sequences of a ‘High Fidelity’ sticker in various places such as mailboxes and stop signs. The neighborhood becomes a character too as much of the action takes place while the characters are walking around the streets, bars, coffee shops, and of course, the record store.

Kravitz is terrific as Rob, and her performance as the protagonist of this show is what drives it. The entire series follows Rob and is seen from her perspective, except for one outstanding episode that follows Simon in his own relationship story. Holmes is the big breakout star from the show, and this episode really showcases his talent.

While it is based on a film from 20 years ago, the narrative is updated for 2020, with references to such things as social media, and how a record store can stay in business in the age of digital and streaming music services. Of course those aren’t the only differences, with the main character changing from male to female we get to see the differences in how women deal with relationships as opposed to seeing it through a man’s eye in the film.

‘High Fidelity’ was adapted for television by Sarah Kucserka and Veronica West, and makes great use of Kravitz and a whole cast of talented actors. For fans of the film, it may seem familiar, but the new storytellers give us a touching story of relationships and heartbreak. The 10 half hour episodes are just the perfect length for a weekend binge.

‘High Fidelity’ is available to stream on Hulu.