By ValleyPatriot on January 23, 2014Comments Off on Highlights from 2013: A Year in the Massachusetts State Senate – IN YOUR CORNER WITH KATY IVES 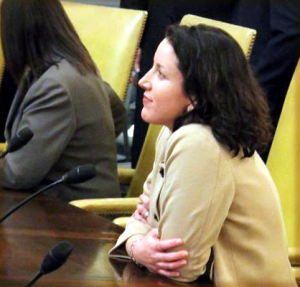 A year ago I was sworn in as the State Senator of the First Essex District, representing the communities of Amesbury, Haverhill, Merrimac, Methuen, Newburyport, North Andover and Salisbury. It has been a very busy and productive year, during which I have advocated for initiatives that have state-wide and district benefits, with a focus on constituent services.

One of the seven bills I filed in 2013 was An Act Relative to Welfare Reform, requiring photo IDs be placed on EBT cards. This provision was included in the Fiscal Year 2014 budget and is currently being implemented by the Department of Transitional Assistance. This is a common-sense step to deter fraud in the system, while still protecting resources to help people that truly need this assistance such as seniors, those with disabilities, and children. The Senate also passed a more comprehensive welfare reform bill that will make public assistance more transitional and invests in job placement and training.

The Senate passed a bill requiring newborns to have a simple and quick blood oxygen reading via a clip placed on the finger for early detection of cardio vascular problems, a bill I signed on to and believe will be an important preventative measure in health care.

I made my first speech on Senate floor to advocate for increased funding for municipal training in Massachusetts from $200,000 to $500,000 in order to change the trend of decreased funding for training for city and town police officers. Massachusetts has ranked at the very bottom of U.S. states for funding municipal police training and its important to reverse that trend in funding.

The Senate passed the Valor II Veterans Bill. Among other aims, this bill will prevent students in the armed services from having to forfeit tuition payments or credits if called to duty and included amended language I co-sponsored that broadens the definition of eligibility for Medal of Liberty recipients to not only include those killed in action but also includes those “… who died in service while in a designated combat area in the Line of Duty.” This will allow us to honor an even greater number of deserving Massachusetts service men and women who have sacrificed their lives for their country while on active duty.

I filed and continue to advocate for a bill, An Act Relative to Public Records Request that will strengthen government accountability and transparency. This bill would put teeth into the current law so that those who ignore requests for public records are held accountable.

As Chair of the Joint Committee on Tourism, Arts and Cultural Development, I worked on releasing the bill to study bringing the Olympics to Massachusetts. Growing tourism in the region and investing in historic preservation and the arts is beneficial for all, including small businesses and residents. I continue to work to bring more funding to my district and to showcase the Merrimack Valley across the state.

Serving as Vice-Chair of the Joint Committee on Small Business and Community Development has allowed me to work with committee members on legislation and strategies to support small business and local economic growth.

As a member of the Joint Committee on Consumer Protection and Professional Licensure, I have advocated for passing a secondary metals bill to discourage thefts and sale of stolen scrap metals. The bill passed the Senate and is awaiting action from the House. I also continue to work on a bill I filed currently in this committee, An Act Relative to Unsolicited Loans. This bill strengthens consumer protection from identity theft from unrequested credit/loan checks in mail. In light of the recent Target security breach, we should be doing everything we can to protect against identity theft and security breaches.

During the budget deliberations, I advocated for an increase in local aid levels for cities and towns for the Fiscal Year 2014 budget, ending a trend of reductions in local aid and voted to create a commission to study the school funding formula. I also helped secure funding for the C-10 Foundation’s monitoring of nuclear radiation within the 10-mile radius of the Seabrook Nuclear Power plant and attained funding for sand nourishment for Salisbury Beach.

My office team provides continuous constituent services, whether residents need assistance to navigate unemployment benefits, veterans services, healthcare coverage questions, or other matters related to state business. This is by far the most important aspect of my job.

The people of my district are my priority and I intend to continue to work on their behalf. I look forward to the work ahead for 2014 and appreciate the opportunity to representative the First Essex District.