By John MacDonald on January 22, 2016Comments Off on Hillbilly 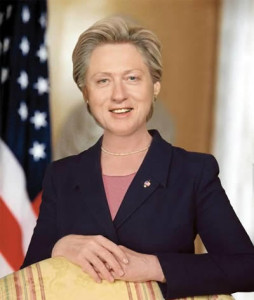 It’s an odd thing when the American entertainment industry blends popular couples by binding their names together. An example would be Brad Pitt and Angelina Jolie that got the name “Bradgelina” or when Ben Affleck and Jennifer Lopez cursed tabloid covers with the name “Bennifer”. However, let’s not forget when this odd tradition somewhat originated during the Clinton Administration years, where Bill Clinton and Hillary were considered one in the same… hence “Billary”.

Now as we are getting closer to the nation’s Presidential Primaries and Caucuses, we get closer to making a decision about who will be our next President. Democrats have offered up a limited field of candidates as the DNC has managed to rig the game for their presumptive nominee, Hillary Clinton. It’s unlikely that as popular as Bernie Sanders seems to be with progressives and people generally disgusted with establishment Democrats; that it will be enough to overcome the impending political Tsunami named “Hillary”.

Why do Democrats want to do this to themselves? Again?

Does anyone really think that Hillary cares about anyone other than herself? I mean is anyone falling for her “vote for me, because I care about woman’s rights” routine? How could you, when she openly accepts the way Islamic Terrorists and peace loving Muslims in the Middle East treat woman? Where was her voice when she was Secretary of State on this issue? When she was a US Senator for New York? First Lady? Oh, that’s right. Nowhere. It’s hard to believe a President Hillary would do much more than ignore the issue. Plus, gloating will dominate most of her time.
Are Democrats so desperate for a Hillary Clinton Presidency that they expect a majority of Independents and some pie-eyed Republicans in a General Election to overlook Bill and Hillary’s self absorbed past and present laundry list of egregious offenses? Let’s see… From the mysterious death of Vince Foster, Whitewater and Monica Lewinsky’s blue dress, to unsettling deals by the Clinton Foundation selling precious metals to the Russians, with then Secretary Clinton’s help. We want these snake-oil slick professional hucksters back in the White House? Democrats can’t do better?

I mean I’m no Bernie Sanders fan, but I can’t imagine the American public experiencing a political “Bern” style scandal or brew-ha-ha plaguing a Sanders White House. Well not anything more than an unpaid parking ticket, yelling at the kids to get off his lawn during the Annual Easter Egg Roll or a story of a President Sanders sending back soup at the Old Ebbitt Grill. Maybe…

That brings me back to Bill and Hillary. Or, I should now proclaim that Hillary gets first billing. Hillary and Bill. Or, let’s just say “Hill-Billy”. Yes… Hill-Billy pretty much sums up my expectations for what the country will gain from another Clinton Administration. Sorry, but my mind can’t wander past the thought of what would potentially be the first official Hill-Billy scandal? Would DC college aged female interns immediately be sent home after another “Lewinsky” situation? Would blue dresses be banned from White House functions? Will water damaged cigars be found dumped behind The White House bushes? Would North Korean agents be found sleeping in the Lincoln bedroom, with nuclear secrets under their pillows… again?

How about a Hill-Billy Administration? Who would Hill-Billy put in charge? Obama Administration retreads, Clinton henchman or worse… Both? How does “Sid Vicious” Sidney Blumenthal sound? The same Sid that was banned by the Obama White House, who advises Hillary and her husband on everything from Republicans, to demonize, to Benghazi. Will he become White House Press Secretary or Secretary of State? How would Al Gore sound as head of the EPA? Would poor farmers become poorer and have to pay emission taxes for their cows breaking wind? How about Bill’s dysfunctional brother, Roger “I sell Presidential Pardons” Clinton, for Attorney General sound? The list would go on and on…

As the father of two girls, I really do hope (and no reference to Hope, Arkansas implied here or the hopey changy thing) that the United States will one day elect a woman President. However, we shouldn’t be desperate to check off the “We finally have a woman for President” box with Hill-Billy though. Women everywhere deserve better and Hillary doesn’t deserve the office or the “first” designation. In my opinion it’s worth being patient.

I’ll be honest… I’ll never vote for Hillary Clinton, partly because Bill comes with the package and I just don’t trust either one of them. The other part is that that Hill-Billy haven’t had a good track record together at all.
The Democrats have safer choices. Let’s not threaten the safety of the silverware on Air Force One… Again. Our national security shouldn’t be up for sale… Again. The Clinton Foundation and family shouldn’t profit from the Whitehouse… Again.

And please, no offense to Hillbilly’s anywhere in this country, but know this…. Hill-Billy won’t do anything to improve your circumstances either. An Obama third term would only bring more jail time for your unregulated moonshine and higher taxes to your fiddle strings. So to hillbilly’s and Democrats everywhere, “Feel the Bern” and don’t get burn’t with Hillary… Again.