By ValleyPatriot on November 2, 2011Comments Off on Hit a Dog, Pull Over …it is the LAW! 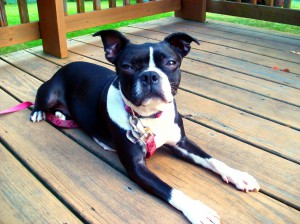 As a dog walker with a majority of my dogs on Waverly, Mass Ave and the side roads in between, I instantly got a really sick feeling in my stomach. I knew, I didn’t know which one, but I knew by the feeling I had, one of my clients had experienced the unthinkable; their family pet was hit by a truck.

Anticipating the phone call, I was still wondering which one it may be. My phone would ring, I would check the number before I would answer, then the call, and I saw the number and thought to myself. “No, it can’t be.” I listened to the message of my client asking me to give her a call back. Nervously I did, Kim Oswald answered and said “Tracey, Kobi died, he was hit by a truck on Waverly.”

Kim explained somehow Kobi got out of the house and was on the side of Waverly. That happens, anyone that has a dog knows at some point their dog will get loose out of their home. Accidents happen. The Oswald’s understand that too. Yes, their Kobi got out and yes their Kobi did get hit by a truck. But what is unsettling to the Oswald’s is when Kobi was hit the driver left the scene. He didn’t stop he didn’t report it into the police. He left their family member, their dog, their love, to die on the side of the road. Fortunately, there was a witness who got the license plate number and called this into the police.

Who would even think to leave a scene of an accident, especially when it involved a family pet, a dog or cat? This person just left Kobi, the family companion, the dog that would run aside the Oswald’s son Nick when he would rollerblade, the dog that would play with his treats in the kitchen and wouldn’t eat them until you covered them in peanut butter, the dog that would snuggle with Kim on the couch when the kids where at school. This person felt the best way to handle this situation was to just leave and forget about it. Someone would eventually help this dog and someone else would have to be the one to tell the Oswald family. This person did the unthinkable, he just left and Kobi died. Maybe if he had pulled over, maybe if he had done the right thing, maybe there would have been time to save Kobi, but no, he just left and Kobi died alone. Kobi and the Oswald’s never got to say their final goodbyes. This man took that away from them, he didn’t stop, he didn’t help, he just drove off. He denied the Oswald’s their final moment, their final closure.

Well in Massachusetts, this is against the law! Mass. Gen Laws 272 PAR 80H The operator of a motor vehicle that strikes, injures or kills a dog…shall report forth with (to owner or police) such accident.

If you are ever in the situation and this type of accident does occur, please pull over immediately and call the police. Think before you leave, this dog or cat is more than just an animal, this is a family member, this is a loved one, this dog or cat has a loving home and a family that cares and deserves the respect to say their goodbyes.

Kobi – miss you, love you, and many, many will never forget you oxoxoxox

Tracey Zysk, owner of Wiggles & Jiggles Pet Care in North Andover MA is a local pet care professional. She has been featured on local radio, tv and newspapers educating the general public on animal care and animal health & wellness. Tracey is a proud supporter of Police, Fire & Military K9 units. Tracey may be reached at wigglewalk@comcast.net. Become a fan on facebook at Wiggles & Jiggles Pet Care and follower of www.traceythedogwalker.blogs.com