Hit and Run Suspect Arrested on Warrants for Other Motor Vehicle Violations, Drove on Suspended License

By Tom Duggan on December 15, 2014Comments Off on Hit and Run Suspect Arrested on Warrants for Other Motor Vehicle Violations, Drove on Suspended License

Robert Jacques, 28 was transported from Boston back to the Methuen Police Station where he is being charged with unrelated warrants for operating a motor vehicle after suspension and another motor vehicle charge.

Jacques was driving a 1999 Chevy Silverado when he struck the student and refused to stop. The boy was flown to a Boston Hospital via MedFlight and his last known condition was critical.

Methuen Police immediately sent out a BOLO (Be on the Lookout) and began to scour the area.

Within a few hours Officer Hardy located the vehicle off of Chase Street near the Methuen Rail Trail. The car was unoccupied and was towed to the Methuen Police Department. A photo (below) released by Methuen Police show the drivers side headlight broken and other signs of an accident.

Police applied for a search warrant so that Massachusetts State Police can gather evidence from the vehicle and expect to charge Jacques after the search.

Methuen Police ran the license plate and then visited the home of Robert Jacques as well as talking to his father on the phone.

According to police, Jacques’ father contacted Robert on his cell phone in Boston where he was trying to catch a train.

Methuen Police Captain McCarthy and Detective DeJesus drove to Boston while talking to Jacques on the phone the entire way to ensure his location until they could arrive. When they arrived at the train station they took him into custody.

Police say Jacques is being “very cooperative” but would not say if he confessed to the crime. 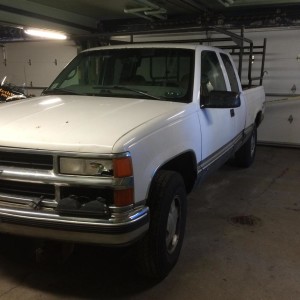 “I really can’t say one way or the other,” Chief Joe Solomon told the Valley Patriot this afternoon in an exclusive interview.

“What I can say is that he is being very cooperative, he waited for police to arrive to be taken into custody and we will be releasing more information shortly.”

“I also want to thank the many Methuen residents who offered us video footage from security cameras all over the neighborhood where the accident took place. This should be a lesson to the criminals out there that there isn’t too much you can do without being filmed by someone.”

Solomon also said that social media was a factor. “Once we had a photo from the video footage we obtained from neighbors, we sent it out on social media and literally thousands of people shared it out on Twitter and Facebook. So, if you plan on committing a crime in Methuen, just know that we will have you on camera, we will have thousands of people sharing your photo on social media, and we are going to get you,” the chief concluded.

Hit and Run Suspect Arrested on Warrants for Other Motor Vehicle Violations, Drove on Suspended License added by Tom Duggan on December 15, 2014
View all posts by Tom Duggan →