By ValleyPatriot on May 23, 2014Comments Off on Homeland Security/ICE Seize Counterfeit Items Worth over $30 million from Lawrence Flea markets 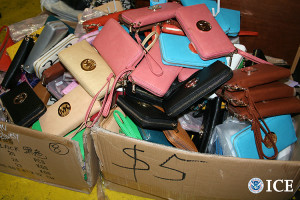 In addition to the seized goods, 42 individuals were arrested and 13 vehicles were seized within the Don Flea Market and the Lawrence Flea Market & Auction House. The operation was a culmination of a federal investigation by HSI special agents, in coordination with the Lawrence Police Department.

“Criminals who sell counterfeit products are a drain on our economy. They put a strain on main street by hurting legitimate businesses and tax payers,” said Special Agent in Charge Bruce Foucart, HSI Boston. “Anyone who thinks counterfeiting is a victimless crime should realize the profits of these black-market sales are routinely diverted to support further criminal activity such as drug trafficking, and money laundering.”

The seizures targeted the sale and trafficking of counterfeit merchandise and apparel, a multimillion dollar criminal industry. The trafficking of these items is a lucrative business for criminals and becomes even more profitable in markets involving popular designer items.

As part of the national effort to combat the growing problem on counterfeit goods, the HSI-led IPR Center is one of the U.S. government’s key weapons in the fight against criminal counterfeiting and piracy. Working in close coordination with the Department of Justice Task Force on Intellectual Property, the IPR Center uses the expertise of its 21-member agencies to share information, develop initiatives, coordinate enforcement actions and conduct investigations related to intellectual property theft. Through this strategic interagency partnership, the IPR Center protects the public’s health and safety and the U.S. economy.

For more information on the IPR Center please visit www.IPRCenter.gov.

HSI encourages the public to report intellectual property rights violations and related information by calling at 1-866-DHS-2ICE or by visiting www.ICE.gov/tips. For more information, visit http://www.ice.gov.