By ValleyPatriot on September 28, 2021Comments Off on Homestead Protection Error – An Open Letter to Governor Charlie Baker

My name is Mohan A. Harihar – I was born and raised in the Commonwealth of Massachusetts and have lived here for most of my life. I love living in Massachusetts and have always considered it my home. In 2005, I purchased my home located at 168 Parkview Avenue, Lowell, MA. I was married at the time and had a good job, working in the beverage industry at the Corporate/Supplier level. Soon after purchasing the property, I filed for Homestead Protection with the North Middlesex Registry of Deeds (See attached photocopy). In 2008, my wife and I fell upon some hard financial times and we tried to modify our mortgage through the Mortgage Servicer – WELLS FARGO. However, over a 22-month period – and despite qualifying for a loan modification, we were denied six (6) times due to “calculation errors” made by WELLS FARGO. Each time, we were told that the error could not be corrected and we had to start the process over.

We were later instructed that Wells Fargo would not approve a loan modification until there was FIRST a default on the loan for a period of no less than 90 days. Based on this instruction from the mortgage servicer, the loan went into default – at which time we were told that there still would be no approval for a loan modification. I knew there was something fraudulent going on, but was unable to prevent the foreclosure of my home in 2010. I’m not a legal expert and have no legal experience – but knew I had to fight for what is right, in order to save my home. Still facing severe financial hardship and no available resources to retain legal counsel (including legal assistance avenues suggested by the Commonwealth), I was forced to represent my self as a Pro Se Litigant.

A lot has happened since then – a partial background summary includes the following:

1. The foreclosure of my property was ultimately deemed ILLEGAL by: (1) The Massachusetts Office of the Attorney General (MA AGO); (2) US Department of Justice (DOJ); and (3) Federal Bank Regulators. In fact, I received settlements from two (2) separate lawsuits – the first settlement came from a lawsuit brought by 49 State AG’s against the Big Banks; and the second from a similar lawsuit brought by Federal Bank Regulators – totaling approximately $3000. The legal disclosures of each settlement stated: “If this settlement amount does not cover your total damages for the loss of your home, etc.…, you have the legal right to pursue additional damages – on your own…”

2. In order to recoup the substantial gap in damages, civil complaints were first filed in MA State Court(s) – which in 2015 necessarily led to filing a Federal lawsuit in the US District Court (Boston) against all parties who knew there was no legal standing to my property and still conspired to defraud me of my Homestead. The Primary argument supporting the claim comes from a related case brought by the Federal Government and the sworn testimony of Nationally recognized Fraud Expert – Lynn Szymoniak, evidencing that the RMB (Residential Mortgage-backed) Trust that claimed to own my mortgage was tied to fraud in its creation. Therefore, the Trust – along with the associated mortgage(s): (1) has not been legally securitized; (2) is considered a non-security; and (3) are both considered entirely void once fraud has been evidenced. As a matter of record, this legal argument stands unopposed by all named Defendants. Since these evidenced legal arguments come from the Commonwealth and the Federal Government, my Homestead Protection should have prevented the illegal foreclosure and my unlawful displacement.

3. There’s been a multitude of judicial failures associated with the referenced Federal (and MA State) litigation that has steadily gained attention throughout the Nation over the past decade. To date, there’s been an unprecedented eleven (11) recusals of record (Federal, 2 MA State) after judicial misconduct had been evidenced for the record – largely in part to judicial officers ignoring their judicial oath and brushing aside all of my evidenced legal arguments for the purpose of reaching a corrupt and pre-determined outcome. Currently, all litigants are waiting for jurisdiction to be re-established in the Federal Court, following the sua sponte recusal of US District Court Judge – Hon. Allison Dale Burroughs. Similarly, in the Middlesex Superior Court (Woburn, MA), litigants are waiting for jurisdiction to be re-established, following the evidenced disqualification of the Hon. Janice W. Howe – who, as a matter of record has exemplified the same patterns of corrupt conduct as Judge Burroughs, however – has refused to recuse herself.

4. Based on my interpretation of the law, once jurisdiction has been justly restored, all Defendants face a DEFAULT judgement with prejudice, for purposefully trying to deceive the Court, or what is referred to as, “Fraud on the Court” under Fed. R. Civ. P. 60(b)(3). As a matter of record, the Fraud on the Court claims against all named Defendants stand unopposed. In the interest of judicial economy, I have (in good faith) offered all Defendants the opportunity to resume legal settlement discussions. However, all litigants have chosen to maintain their current position – making it necessary to continue the pursuit of maximum civil, criminal and professional accountability, regardless of timeline.

Governor Baker – to be clear, IN NO WAY am I suggesting that the Commonwealth should interfere with any ongoing litigation. However, it is necessary to bring to your attention the following list of government failures that are directly related to this matter and require corrective action. They include (but are not limited to) the following:

1. The Massachusetts Office of the Attorney General has thus far refused to bring criminal indictments for the evidenced criminal violations of record – that are directly related to the referenced civil complaint(s). This is one (1) of the reasons why the Commonwealth of Massachusetts and former Attorney General – Martha Coakley are named Defendants in the above-referenced Federal lawsuit – HARIHAR v US BANK et al;

2. Legal efforts to address and correct the identified Homestead Protection Errors are being blatantly ignored by the MA AGO, North Middlesex Registry of Deeds and the City of Lowell;

5. Legislative (and other) Leaders here in the Commonwealth – who as a matter of record have been regularly updated on these very serious legal issues for years, continue to exhibit nonfeasance/malfeasance. They include (but are not limited to): (1) US Senator Elizabeth Warren (D-MA); (2) US Senator Ed Markey (D-MA); (3) Congresswoman Lori Trahan (D-MA); (4) Congresswoman Ayanna Pressley (D-MA); and (5) Secretary of the Commonwealth – William F. Galvin. I have received multiple communications from Congressman Stephen Lynch (D-MA), a Senior member of the House Financial Services Committee – stating that his office would like to assist with the addressing the referenced housing and tax issues. However, after multiple communications with the Congressman’s Boston office, there has yet to be any effort to address these issues;

6. Governor Baker – as required by Federal Law, I’ve reported to your direct attention evidenced violations to ARTICLE III and 18 U.S. Code § 2381 – Judicial Treason. The most egregious example has been evidenced by RECUSED US District Court Judge – Hon. Allison Dale Burroughs, who as a matter of record has continued to issue orders without jurisdiction. By definition, this very serious criminal violation is considered – “Warring against the Constitution of The United States”. However, your office has yet to acknowledge this evidenced crime, for reasons unknown.

Governor Baker – I’m only one person and this ordeal has unnecessarily kept me in a severe financial hardship for more than a decade, with very limited means and without the ability to retain legal counsel – even with the severity (and totality) of these evidenced legal issues. No matter if it’s an illegal foreclosure, or any other issue – NO AMERICAN or resident of this Commonwealth should ever have to endure the systemic failures that I have experienced firsthand – let alone for more than a decade. I want to believe that my Civil Rights actually mean something again, instead of being ignored. I want to believe that a judge will actually uphold their judicial oath and act impartially – instead of brushing aside all evidenced claims in order to reach a corrupt and pre-determined outcome. I want to believe that State Prosecutors will actually bring criminal indictments after I’ve filed a criminal complaint(s) for evidenced criminal violations – And I’d certainly like to see elected leaders in this Commonwealth – particularly those who continue to boast about their “accomplishments” fighting Wall Street, actually acknowledge these identified issues and fight for their Constituents. No American citizen or resident of this Commonwealth should EVER accept anything less. More than anything, I’d like to finally (and legally) return to MY HOME.

1. Please have your office assist with communication efforts to address the identified Homestead Protection Errors – I am currently trying to gain alignment with the MA AGO, North Middlesex Registry of Deeds and the City of Lowell, so that these evidenced Homestead errors can more easily be corrected in a court of law, without any further, unnecessary delay;

2. Please have your office assist with addressing identified criminal, tax and insurance issues with the MA AGO, MA DOR and MA DOI;

3. Please have your office assist with addressing professional licensure violations – and businesses found to have engaged in evidenced criminal, dangerous and unethical business practices, beginning with: (1) the listing Real Estate Brokers – Mary and Ken Daher (Weichert Realtors/Daher Companies, Methuen, MA); and (2) Buyer – Real Estate Instructor/Agent – Isabelle Perkins (Real Living – Schruender Real Estate, North Andover, MA) along with her husband Jeffrey Perkins and Bank Defendants – WELLS FARGO, US BANK and CITIGROUP. Collectively, these parties ignored legal disclosures delivered to them via certified mail in 2013 and instead, chose to DEFRAUD me of my Homestead, knowing that there was no legal standing to buy or sell My Property;

4. Please have your office assist with communication to Commonwealth’s Office of General Counsel – Specifically, Chief of Staff – Diane Lawton, as I have extended an offer (in good faith) to have a settlement discussion with the Commonwealth, but have yet to receive a response.
Successful (and just) resolution to the above-referenced issues will certainly help to resolve existing legal issues in the US District Court and Middlesex Superior Court. Thank you, Governor Baker for your help with addressing – and justly resolving these issues. If you have any questions, please advise. If needed, additional information related to the decade-long litigation history can be found on my website: mohanharihar.academia.edu – I look forward to working together with your office and most importantly, returning to my home in the coming days.

GOD BLESS THE COMMONWEALTH OF MASSACHUSETTS! 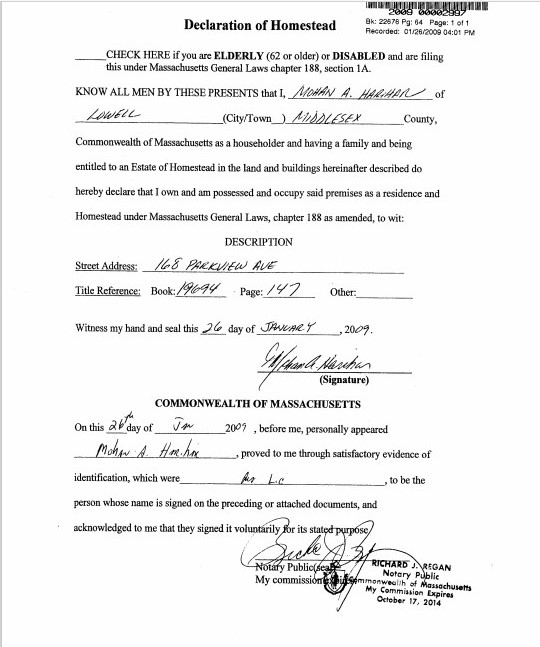