By Tom Duggan on September 21, 2019Comments Off on HOMETOWN HERO: Devon Michael Brantmuller 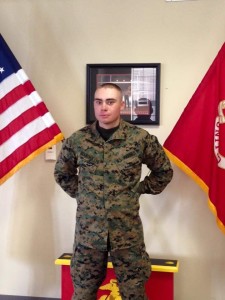 Devon Michael Brantmuller graduated from Salem, NH, High School on June 12, 2015. He then enlisted in the United States Marines and left for Paris Island (Boot Camp) on November 30, 2015.

His father Michael flew down to Marine Corps Air Station, Cherry Point to see the ceremony. Devon Brantmuller has served in Spain and Italy as well as here in the United States of America.
“We are so very proud of him, he has gone far beyond what we ever expected him to and he keeps making us proud today,” said Devon’s mom Dawn Brantmuller. ◊