By TraceyZysk on May 26, 2013Comments Off on “I’m Animal Friendly” License Plate Marks Milestone 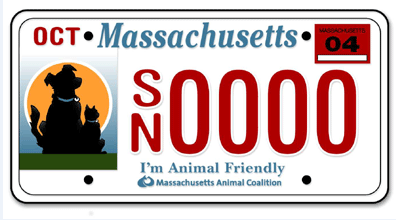 On September 24, 2011 I had the wonderful opportunity to meet Karen Smith of the Massachusetts Animal Coalition at the New England Pet Expo in Wilmington, MA. When I stopped at Karen’s booth it was well decorated and nicely organized, but more importantly, it was more informative than I ever imagined.

Karen was representing the Massachusetts “Animal Friendly” license plate campaign. She had plates available for all to see and pamphlets of information. We have all seen the plates, and we are familiar with what these plates represent. However, how many of us know the details? Karen provided to me information from the Massachusetts Animal Coalition in a recent press release that I wanted to pass on to our animal loving Valley Patriot readers.

The Massachusetts Animal Coalition (MAC) has just awarded $176,000 to 29 animal organizations and control facilities across the state. These grants tip the scale: as of today’s date over 1 million dollars have now been given out to numerous animal shelters, rescue organizations, and municipal animal control departments. The funds – used to help support vital spay and neuter programs – are raised through the sale of the “I’m Animal Friendly” charitable license plates. More than 8,000 “I’m Animal Friendly” license plates have been sold since the program’s inception in 2004.

“Massachusetts drivers are really showing their care and concern by not only purchasing the plates, but also renewing them,” says MAC Board Member Anne Lindsay. “Although this program only touches the tip of the iceberg, given the scope of the problem of animal homelessness, continued sales of the plates will move us closer to the day when all Massachusetts animals have a home.”

The grants are used to fund programs providing spaying and neutering to cats, dogs and rabbits at minimal cost. Proceeds are granted out each year by MAC to nonprofit animal organizations and city and town animal control departments within the Commonwealth. As of today’s date, a total of $1 million has been granted, and more than 22,000 animals have been spayed or neutered as a result of the “I’m Animal Friendly” license plate program. The plates are available through the MA Registry of Motor Vehicles. They are tax deductible and can be purchased online by Massachusetts motorists at or at any full-service RMV branch.

“The license plate program has made a huge difference in the numbers of animals we are able to get spayed and neutered,” states Chris Arnott of the Lowell Humane Society. “For example, Jinx is a nine year old cat who was surrendered to the Lowell Humane Society. She had given birth to 15 litters in her lifetime, all yielding 5-7 kittens each. Jinx was spayed thanks to the MAC grant.”

“MAC’s goal is to work toward an end to homeless animals in our state,” says Ms. Lindsay. “The plate program is a significant way for everyone in Massachusetts to help reach this goal.”

Tracey Zysk, owner of Wiggles & Jiggles Pet Care in North Andover MA is a local pet care professional. She has been featured on local radio, tv and newspapers educating the general public on animal care and animal health & wellness. Tracey is a proud supporter of Police, Fire & Military K9 units. Tracey may be reached at wigglewalk@comcast.net. Become a fan on facebook at Wiggles & Jiggles Pet Care.