In Tandem: Pedaling Through Midlife on a Bicycle Built for Two ~ KANE’S CORNER

By ValleyPatriot on December 2, 2022Comments Off on In Tandem: Pedaling Through Midlife on a Bicycle Built for Two ~ KANE’S CORNER 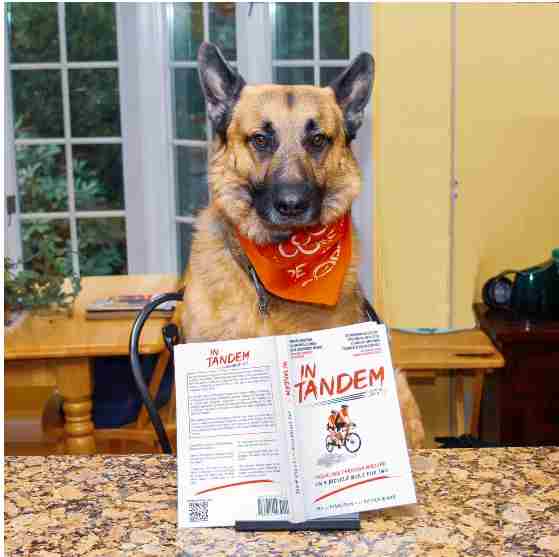 This month Kane wanted to do something different and asked if he could do a book review, as he believes people just aren’t reading enough. With our blessing he reviewed “In Tandem: Pedaling Through Midlife on a Bicycle Built for Two.”

This book is an intriguing metaphor that captures the challenges of jointly peddling through life on a bike that requires cooperation and communication and likens it to a new growing relationship. It is by Jay Livingston with Szifra Birke.

Kane has never ridden a bicycle, but he does see Szifra and Jay zoom around his neck of the woods regularly on a bicycle built for two. They always say hello and take an interest in his well-being. I bet many of the readers of this article and their book “In Tandem” (2022) know Jay Livingston and Szifra Birke, very much entrepreneurs and community leaders in the Lowell area.

Szifra (is the daughter of the owners of the former famous Birke Department store downtown Lowell. Her parents were Holocaust survivors and very much part of the fabric of what makes the city of Lowell great.

She selflessly fosters a sense of community by working countless years as a Mental Health Therapist, volunteering and assisting with youth development programs, supporting substance abuse prevention initiatives, and small business development. Jay has a similar background, also a mental health clinician and executive coach for people as well as our K9 companions and their humans. He is an expert sailor. Both are avid exercisers, and the list goes on of interesting hobbies.

Szifra and Jay sound a lot alike, right? Kane says WRONG. Actually, with the exception of being givers and similar professions they are very different, and they are in a successful committed relationship.

Szifra being an energetic extravert basking in the sun of human interaction and Jay being energized by introspection and quality alone time. Kane has never been in a romantic relationship, although he sometimes feels shy, and tongue tied when he met a beautiful chocolate lab. He could use some pointers on how to communicate. This topic peaked Kane’s interest. How exactly could Kane build a new relationship? And exactly how do Szifra and Jay work together traveling on a tandem bike up mountains, and riding for miles, days, and weeks.

So, who knew that you can purchase a tandem bike with an independent Coasting Drivetrain called a Devinci model. Kane learned this when he attended the book signing at the Lala Bookstore in Lowell. Unlike the traditional tandem bike where the pedals function in unison automatically the Devinci allows the front and back driver to pedal independently with above and beyond communication to keep riding safe and productive.

This is not much different than the need for two independent people who honor and value their independent individual needs as well as the needs of the couple. The book signing was filled with other cycle enthusiasts who discussed the roles of the captain at the front of the bike and the stoker at the back of the bike. Both members of the team have an obligation to themselves and their teammate to stay safe, in shape and communicate their individual and collective needs. Also, a good description of a healthy relationship.

So to get his humans attention especially if they are on the computer, Kane pretends he is chewing something then they ask him, Kane “what do you have in your mouth”, it’s usually nothing, but this does get their undivided attention and sometimes a run through the kitchen. My sister Dog Ruby simply walks over for a pat or sits next to her people. I guess Kane has a lot to learn. In Tandem is an open book of the challenges associated with relationship building including an honest look of the good, the bad, and the ugly. This is presented with humor, compassion, and open communication.

The book also explores how our previous upbringing and relationships contribute to our present relationship. However, on the tandem bike, which is a very in the moment activity, the only two people riding are the couple. That couple Szifra and Jay have found a mesmerizing rhythm on how to keep the pedals moving when the going gets tough as they ride into their future. If you would like to read In Tandem there are copies and can be ordered at the Lala Bookstore in Lowell (Independent bookstore) and Amazon.