By ValleyPatriot on January 31, 2017Comments Off on IN THE GROOVE with Cindy Annis – The Ronettes Part II 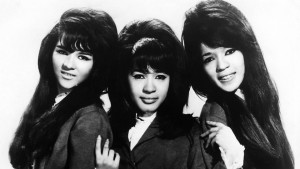 “The Phil Spector Years.” OK? Let’s get right into 1963, when Estelle called Phil Spector. Estelle simply told him about the group and what they did in the entertainment world. Spector agreed to let them audition for him. The audition went well, so the girls signed with Phil Spector. Spector wanted to sign Ronnie to go solo, but Mom stepped in and said no, this is a group, not to be broken up. So now the girls are broken off with Colpix, their last label, and are on their way with Spector by March of 1963.

So, The Ronettes rehearsed a bunch of songs, and recorded many of them. Phil Spector either didn’t release them, or credited them to someone else. So, their first 5 songs were recorded, and not released under their name when “Be My Baby” was done. Phil Spector, Jeff Barry, and Ellie Greenwich wrote and arranged this one. The girls recorded it in July of 1963. The Ronettes didn’t waste any time hounding Spector to release it, and it came out in August. It climbed the charts to #2 on The Billboards Top 100 charts. Nothing was the same for Ronnie and the group. Everything the girls ever thought about was happening faster than they thought possible. The Ronettes “Be My Baby” became such a huge hit that the Ronettes were touring the country with Dick Clark.

One of the very cool things about this song is some of the back-up singers. Cherilyn Sarkisian, was one of them, another one was her boyfriend, Sonny Bono. Later called Sonny and Cher, were both on the recording of “Be My Baby”. Cher became a regular back-up for Spector after that.
The writing team of Spector, Barry, and Greenwich went right back to work and came out with, “Baby, I Love You.” Spector wanted the group to go right out to the California studios to record this one, but there was a huge conflict. The group was supposed to be leaving with Dick Clark’s Caravan of Stars. So, Spector had Estelle and Nedra go with their cousin Elaine, with Dick Clark, while Ronnie, Darlene Love, Sonny, and Cher, and others went out to California. Leon Russell played piano for the recording session, and the release was in November of 1963. It turned out not to be nearly as good as their first release only making it up the charts to #24 on the pop charts, and #6 on the R&B charts.

Another huge recording was the “A Christmas Gift For You.” Anyone who was signed with Phil Spector sang on this album. The Ronettes did three songs. The finale was “Silent Night” and Spector wanted everyone to really sing their hearts out. The album wasn’t much of a success until it was re-released in 1972 by Apple Records. It peaked at #6 on Billboards for best Christmas album of the year.

In 1964, the Ronettes went on their first British tour. They were hanging with the likes of the Beatles and the Rolling Stones. It is said that Ronnie had a short affair with John Lennon. The Rolling Stones opened for the Ronettes while on tour in the UK. When they got back to the states they quickly went back to work in the studios, and did two songs that Spector wouldn’t release at the time. The Crystals also were recording for Spector and he withheld releases for them, as well.
The Ronettes were one of the few groups to hang in there while the British Invasion took place. They were on many television shows like Dick Clark’s American Bandstand, and Hullabaloo. Even though the lyrics weren’t quite done, Ronnie went into the studio to do the lead tracks for their next hit, “Walking In The Rain.” She put on her headphones and the subtle sounds of thunder started and as it got louder and stronger, she sang the song. She said this was the only song she was able to do in one take. This song was released and ended up being their second biggest hit only to “Be My Baby.” It peaked at #23 on the Billboard’s Hot 100. The song, “Breaking Up” was recorded and released in April of 1964. In June of the same year “Do I Love You” was released. Both songs broke into the Billboard’s Top 40, but just briefly.

What goes up, must come down, and this is true for the group, The Ronettes. One of the reasons this group came down was the love Spector had for Ronnie. He was afraid he might lose her if they grew too big. He held the group to their contract, so they had to continue recording songs. He withheld many releases that were quickly covered by many others. “Chapel Of Love,” was one of those songs. The Dixie Cup got it and released their version, and it was a huge hit. Ronnie and the group were actually depressed over this. Once The Supremes grew bigger than The Ronettes, Spector relaxed about his relationship, but the damage had been done.

The girls went on tour, in 1967, to Germany. This is when they decided to break up the group and go on with their own lives. They all married, Ronnie marrying Spector. Ronnie said it was like she was jailed in his very large house. She went into the studio only once while they were married.
Ronnie left Spector in June of 1972. They were divorced by 1974. Ronnie tried to put the group back together, but she was the only one interested. Ronnie got Denise Edwards, and Chip Fields to replace Nedra, and Estelle. They did some records, but nothing big. They did some touring, also. By the end of the 1970s they were done.

The Ronettes sued Spector for back royalties, and got about 1 and a half million dollars. They won many other things, as well, such as a Grammy in 1965 and they went into the Grammy Hall Of Fame in 1999. They were also inducted into The Rock And Roll Hall Of Fame in 2007. Estelle died in 2009 of colon cancer, Ronnie did a few more gigs like singing with Eddie Money on “Take Me Home Tonight,” and of course she wrote a book entitled “How I Survived Mascara, Miniskirts, and Madness.”

I think we got it all in. I hope you enjoyed my version of “The Ronettes!”

Cindy Annis, In the Groove, Ronettes