By ValleyPatriot on March 29, 2015Comments Off on Internet Sales Tax in New Hampshire 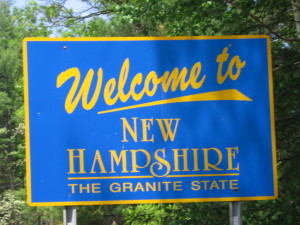 It is unsurprising that in a state with no general sales tax, the topic of Internet sales taxes has become a key issue for potential GOP presidential candidates testing the waters in New Hampshire. In particular, New Jersey Governor Chris Christie has had to answer some tough questions about his recent plan to tax online sales in his state. Previously, he supported the federal “Marketplace Fairness Act.” Wisconsin Governor Scott Walker has also supported Internet sales tax proposals similar to the “MFA”.

Given the issue’s renewed prominence in the early stages of the New Hampshire primary and its particular importance to Granite Staters, it is worthwhile to review the mechanics and impact of Internet sales tax policy.
Here is a review of the policy that I wrote for The Valley Patriot when the issue first came to prominence in the spring of 2013:

By any measure, the “Marketplace Fairness Act” is terrible policy. However, its negative effect on New Hampshire and small business is particularly pronounced.

The proposed legislation is an Internet sales tax that seeks to force every online retailer with annual sales exceeding $1 million to collect a sales tax on their customers based upon the sales tax rate where that customer resides. This would even apply to businesses operating in states with no sales tax.

How does the law work? Normally, sales taxes are collected and remitted by retailers at the “point of sale.” When retailers at “The Loop” make a sale, they collect the sales taxes that are due to Massachusetts and the City of Methuen and send them to the proper revenue agency. Under this scenario, it is immaterial whether the particular buyer is a resident of New York City (8.875% sales tax) or Salem, New Hampshire (0% sales tax) because the tax is collected at the “point of sale” and thus is the same for everyone. Under the proposed law, the “point of sale principle” is discarded and retailers are forced to track the place from which an online buyer has made a purchase, calculate that shopper’s applicable state and local sales taxes based on wherever they reside, collect the tax, and then remit them to the applicable revenue agency.

Currently, nothing prevents states from taxing online sales within their state. However, few states elect to do so because it would encourage companies to locate in less-taxing states. So, the “MFA” allows states to punish citizens for shopping at out of state businesses. Worse, the law invites double taxation through interstate compacts, which could allow sales to be taxed in both the shopper and business’s jurisdiction.

The act is particularly offensive to states like New Hampshire who value its sales tax free environment. Grant Bosse, formerly of the Josiah Bartlett Center for Public Policy captured its effect on New Hampshire perfectly, “Taxing online sales wouldn’t cost New Hampshire residents much in the short term. We don’t have a sales tax, so we wouldn’t have to pay it. But it would erode our ability to attract online retailers, at least those that hope to grow to a million in annual sales.”

Often Internet sales are the only thing keeping a significant number of small businesses afloat. Internet sales have weathered the disastrous Obama economy remarkably well. Hurting the ability of small businesses to innovate and make money online by locating Internet operations in tax friendly states will only result in more businesses closing their doors. The only winner under this scheme is the ever-growing appetite of government.

New Hampshire’s two United States Senators, Kelly Ayotte and Jeanne Shaheen, deserve great credit for opposing the MFA and fighting for an exemption for states with no sales tax. Ayotte has astutely pointed out that the proposed law would add expensive administrative costs by forcing small businesses to track the place from which an online shopper has made a purchase, calculate the applicable state and local sales tax, collect that tax, and then remit them to the proper revenue agency. It is an unfunded mandate in its worst form.

The primary selling point is that the act pressures states to streamline and simplify their tax codes. This provision was intended to lure small businesses into supporting the legislation by promising to make it easier for them to comply with the business tax code, thus bringing them some much needed certainly and stability in their day to day operations.

However, the MFA completely fails in that promise because it still requires businesses to keep track of 9,600 widely diverse and constantly changing taxing jurisdictions. Thus, any benefit of the law is vastly outweighed by the additional administrative costs.

In the end, the Marketplace Fairness Act is a stark reminder to always beware any proposed law with “Fairness” in its title and those who support such a proposal will face a particularly skeptical audience in New Hampshire.
D.J. Bettencourt served as a State Representative in the New Hampshire House of Representatives from 2005 to 2012 and was the House Majority Leader for the 2011-2012 legislative term. He currently works as the Director of Development and Community Relations at the Salem Animal Rescue League and serves on the Economic Development Action Committee in Salem, NH.