By Tom Duggan on October 28, 2014Comments Off on Interview with Superintendent-Receiver, Jeff Riley, PT II ~ No Condoms in Lawrence Schools, Test Scores and Teen Pregnancy Under Receivership 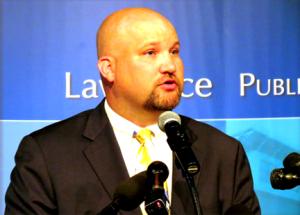 This is part II of Valley Patriot publisher Tom Duggan’s interview with Lawrence State Receiver for the Lawrence Public Schools who took over and replaced the school committee nearly three years ago.

DUGGAN: What are your thoughts on the teacher’s union.

DUGGAN: – I’m talking about this union in Lawrence.

RILEY: I think this union is fine. You know, we’ve obviously had our disagreements but we’ve tried to work with them. We have an agreement in place, we’ve given them their own school, we are trying to work with people, and so I think that teachers have to have some kind of representation, so that if you have a rogue principal or something that teachers have an opportunity to advocate or have someone advocate for them.

DUGGAN: So, no effort on the part of the administration to push kids into graduation that may not be ready and no one is making an effort to weed out teachers that happen to be a little older?

DUGGAN: So, all the teachers that are being let go who are in that age bracket, is it because they were part of the previous regime and are not fitting into the programs that you are doing now?

RILEY: Anyone that was let go from the Lawrence Public Schools were let go for performance. We actually had a process in place for a receiver’s review when I first came, to have not just principal input but outside input. Retired superintendent came in, so we gave people ample opportunity, but it’s all about performance. It’s not about age or anything like that. We have a pretty veteran faculty here in Lawrence, and when you talk about the teachers who won the Sauntag awards, most of them are deep veteran teachers.

RILEY: There have been discussions about what happens after receivership. I think those discussions have started because we have been able to make some positive momentum in the district, but we also need to be very thoughtful of what this looks like after receivership. There are folks that will tell you; people who were on the Springfield Control Board, that they went in and righted the ship, when they left things went back to business as usual. We have to look at that. Like the local school committee, should it continue to be elected? I don’t know. Should it be appointed? I don’t know. These are the things that I think need to flushed out. We have some operators like Community Day Charter School, which has taken over one of our schools. We think that a provision from the commissioner saying that this cannot be undone without the expressed written consent of the Commissioner of Education might be a valid way to make sure we embed the changes we’ve made in the school system. So, It certainly good only in its infancy to discuss, but the discussions are taking place.

DUGGAN: How much political pressure do you get to push the school system in a political direction?

RILEY: I think we’ve tried to negate the idea of me being a one man show; we really try to be inclusive, we hold school committee meetings, we try to keep them involved in the process. We try to hear from teachers and constituents with our literature cabinet, but I think the politics itself has been pretty much divorced from what perhaps other school districts deal with. I would say both previous administrations, with Mayor Lantigua and the current administration have been supportive and have not been intrusive into our efforts to try and fix the problems that are taking place here.

DUGGAN: What’s your relationship with Mitchell Chester (State Education Commissioner), what is he most concerned about? Is he active in guiding you or advising you about what to do with the school system?

RILEY: I meet with the commissioner regularly. I’d say he’s given me broad space to do what I believe is correct. The program we put in place to try and fix the schools is very different than what you would consider a liberal democratic program and he has allowed me to do that and when I was in discussions to take this job, I made it very clear that these are the things that have to happen if we are actually going to make changes and get better results for kids. He has allowed me to do that. He has certainly been involved on a regular basis but not to the point where I felt was intrusive or that any politics have come into play.

DUGGAN: Where is the system now, drop out rates, teen pregnancy rates, etc., compared to where it was when you came in?

DUGGAN: You do have daycare centers at the school, the teen pregnancy rate affects your budget…

RILEY: We have two, Phoenix and the High School.

RILEY: Well, obviously we’d prefer that number be zero. We have an abstinence education plan in place. It’s a complicated subject. Some groups demand that we bring condoms in to the schools, which I have chosen not to do. What I said is that I believe that we are in a community and we need to listen to the community. I have listened to the pastors who believe deeply in the sanctity of life, and that I want to hear from the parents what they think is the best thing before I make a unilateral decision to bring condoms into the schools. Now, kids do have access to condoms in the local health center right down the street from the high school. I mean, children certainly know how to avail themselves to those things. But, as of today I have not had the feedback from the parents that tells me that this is what they want.

DUGGAN: Is the school system where you wanted to be when you started?

RILEY: I think we are slightly ahead of where we wanted to be. We didn’t anticipate the significant growth in test scores that we had last year. I felt that given a lot of the changes and restructuring that was being done that we would not have that kind of growth. But, I think our relentless focus on teaching and learning, our focus on using data, our focus on getting kids to work hard to give up their vacations, to come in and get extra help with our best teachers, things like that are important. That is where we have seen a lot of gains with our kids.