By Cheryl Hajjar on May 28, 2015Comments Off on Is Your Child Addicted To Video Games? ~ Babies and Briefcases 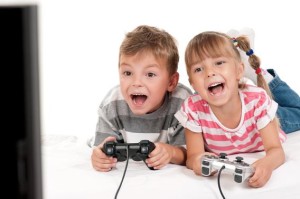 Gamers come in all different shapes and sizes. Everyone of us knows a gamer who sits in front the TV and plays on Xbox or PlayStation for hours at a time with their friends. Its almost like a cult, where in their subculture, they speak another language that only they can understand. An underground world of villains, heroes and good versus evil.
Today all of us, including our children have either smart phones, tablets or handheld devices where the access to any kind of game we want to play is available. Candy Crush, Angry Birds and Call of Duty are all games that every one of us have either played or heard of before.

Children today are joining these online “virtual” gaming communities where they log online and rival each other in the latest version of their favorite game. They all have avatars and gaming names logged into their Xbox’s. A modern day babysitter for the busy parent, or so it seems on the outside.

But what if your child was addicted to video games? No parent wants to think of this as a possible reality for their child. Video games were designed to be fun and a source of entertainment for children, not to be a cause of addiction.
There are two types of video game addiction: Single player addiction, where the goal is to rescue a princess or complete a mission, thus achieving a high score.

Multi player addiction is when video games are played online with other people and are especially addicting because there is no ending of the game. They often involve creating an online character and children will build relationships with other online players as an escape from their reality, almost as a subculture community of other gamers, a video game underworld if you will.

So as a parent, watching for the signs of video game addiction is key. Here are some of the signs as a parent to watch out for.

1. Irritability or feelings of restlessness when unable to play.
2. Preoccupation or obsessive thoughts of previous online activity or anticipation of the next online session.
3. Lying to friends or family members about the amount of time played gaming.
4. Avoiding doing homework to play more video games.
5. Isolation from others or social events to play more video games.
6. Unusually tired.
7. Migraines or an unusual amount of headaches.
8. Poor personal hygiene.
9. Wrist or joint pain due to the overuse of the controller for the gaming system.
10. Depression.
11. Skipping meals or sleeping less to play more games.
12. Poor grades or a decrease in grade averages.
13. Weight gain.

What can you do as a parent if you see your child displaying some of these symptoms?
For starters, putting a time limit on gaming is the first thing to do. Limiting gaming to only on the weekends is another. Encourage other activities such as an outside game of basketball or going to the beach or watching a movie together is also a way to lessen the time spent online.

Sign your child up for another physical activity at school or with an outside community such as the YMCA is another way of getting them interacting with others and less with the online gaming. The goal here is to break the addiction before it becomes too severe and you need to seek professional help. Children today are living in an Internet world and its becoming increasingly difficult for parents to stop the internet/gaming addiction. Taking an active role in your child’s online activities will not only make for a healthier relationship but also keep your child in check with the gaming monster.