By ValleyPatriot on July 23, 2015Comments Off on It’s HURRICANE SEASON!!! 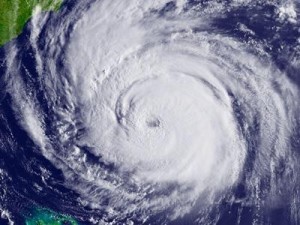 We are now in hurricane season, which runs from June 1st to November 30th in the northern hemisphere.

It eventually cools to the dew point and this leads to condensation, which is a huge contributor to cloud development. Hurricanes form over warm tropical ocean waters where the temperatures of these waters are 80 degrees or greater.

The parts of a hurricane are as follows: the center of the hurricane is called the eye. This is where there is sinking air and subsidence, which causes the clouds to break and the sun to come out. In the eye, winds diminish to light or even calm. This does NOT mean the effects of the hurricane are over!!! Once the eye passes your area the strong winds and rain return. Surrounding the eye is the eye wall. This is the area where some of the heaviest rain occurs. Surrounding the eye wall are spiral bands. Tornadoes can form in the spiral bands due to intense severe thunderstorms.

Lastly, hurricanes are named to aware the public of the great danger they pose. When a hurricane is forecast to hit an area, evacuation of that area goes into effect. People who choose not to evacuate can be in danger due to tremendous flooding.

People can drown in flooding caused by hurricanes. Hurricane names alternate with male and female. If all the names in the alphabet are used, then names are chosen from the Greek alphabet. Because of their severe impact, hurricanes Katrina and Andrew will NOT be used gain. Their names are retired. Hopefully, this article gives you a better understanding of hurricanes and the danger they can pose.

Al Kaprielian is a  world famous meteorologist who has worked for several New Hampshire and Massachusetts media outlets. He is now an EXCLUSIVE columnist for The Valley Patriot. You can hear Al’s weather forecast daily on 980WCAP in Lowell as well as on the Paying Attention! Radio Program on Saturday Mornings at 10:35AM. Email your questions and comments to 7al61@comcast.net.