By ValleyPatriot on July 31, 2019Comments Off on Iwo Jima’s DeFusco and Hyder; Two Men Serving on Sacred Ground ~ VALLEY PATRIOTS OF THE MONTH, HEROES IN OUR MIDST 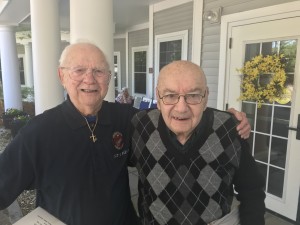 LAWRENCE , METHUEN – Lawrence’s Anthony De Fusco 97, and Methuen’s Henry Hyder 92, did not know each other until they both recently moved into the same assisted living facility, Methuen Village. However, they share a common bond, both men served on Iwo Jima during World War II.

Henry with the Naval Construction Battalions, also known as Seabees. Tony was in the 4th Marine Division, Iwo Jima was Tony’s and the 4th Marines, fourth invasion in the Pacific Theater of the War.

Henry attended high school at Phillips Academy in Andover, Massachusetts. He was drafted shortly after graduating from Phillips. Tony left Lawrence High before graduating and spent the entire war in the Pacific with the US Marines. After the war, Tony became a US Post Office Clerk working in both the “old” and “new” Lawrence US Post Offices. Henry attended Boston University, and after Boston University, Law school, then going into private Law practice in Methuen. His Methuen practice is still open, now run by one of his sons.

Tony has two brothers and a sister; his wife died a few years ago. Tony also has a daughter, who is a nurse, two sons who are in construction, with six grandchildren. Although his Commanding Officer had not yet told him, he was a Sargent in the US Marine Corp on the day he was wounded on the Black Sand beaches of Iwo Jima. Tony spoke very fondly of his commanding officer, a US Marine Corp Major Samuel R Petite, who was later killed on Iwo Jima.

Tony was able to revisit those same beaches over 30 years ago and pay his respects to those who did not come home.

Henry has two sons, a doctor and a lawyer, four granddaughters and a grandson, he is fortunate enough to have his wife still with him. He is very proud that his son has kept his family law firm open.

Tony (with the rest of the 4th Marines) participated in the invasions of Kwajalein, Tinian, Saipan, and Iwo Jima as an infantryman. Henry worked as a Construction Electrician with the Seabees, repairing the three captured Japanese Air strips on Iwo Jima. These airstrips were vital to our success in the air war against Japan.

Both men enjoyed golf, Tony playing at Hickory Hill GC and Merrimack GC, once getting a hole in one at Hickory Hill GC. Henry never got a hole in one, however, he recalls that he enjoyed playing at the Andover Country Club with friends and clients. Tony was a member of the Knights of Columbus, Henry, like his father before him, was a Mason. We had a nice discussion on the need for young men to be more engaged today in their communities, and how today’s young adults should join civic organizations such as the Knights and the Masons.

Tony talked of going to the Lawrence Boy’s Club as a youth and being a member of the “Plainsmen Association” as a young man. In the 1960s urban renewal all but destroyed the ethnic enclaves of Lawrence. Today Plainsmen Park is between Elm and Chestnut Streets on White Street. Located in the middle of the park is a large white stone dedicated to the men of the Plains neighborhood, who served their country with including three who died defending democracy; Corporal Samuel S. Fiacchino, Staff Sargent Samuel L. Hatem, and Seaman First Class Americo Sessa, all young men from the Plains neighborhood who lost their lives during World War II. The monument was dedicated October 1974 by the Plainsmen Association.

Research on the Plainsmen Association brought me to the web site, “QueencityMA.com”, and I found the information on Plainsmen Park’s honorees there. Cpl. Samuel S. Fiacchino graduated from the Armored Force School at Fort Knox, Kentucky as a tank mechanic. He was killed in action with the Seventh Armored Division on December 12, 1944 in Germany.

Staff Sgt. Samuel L. Hatem died in a military accident while on maneuvers in Hawaii March of 1945. He was the first member of the State Guard to die in service during World War II. He was honored with a plaque installed in the State Armory March of 1945.

Seaman First Class Americo Sessa served in the US Navy during World War II. He was a member of the Armed Guard Gun Crew on a merchant vessel. His vessel failed to arrive in port at the expected date of April 28, 1944. The next day he was presumed dead and lost in the North Atlantic.

As for Iwo Jima?

I used Kenneth Bingham’s book, “Black Hell” to do some research. 110,000 Americans fought there, 6,821 died defeating the entrenched Japanese. Additionally, 26,040 were wounded, including Sgt. Tony De Fusco. Two Americans were captured and killed by the Japanese. Twenty-seven Americans received the Medal of Honor during the five-week battle. The only known photo a father and son fighting together on Iwo Jima is of Seabee Chief John Smith and his son, John Jr. of the 5th Marines. John Jr. was killed in the fighting the day after the photo was taken. Chief Smith’s other son Granville, also a Seabee, was wounded during the fighting earlier at Saipan and was sent home due to his wounds. One day after Iwo Jima was declared “secure” by senior Military Leadership, over 250 Japanese troops were killed after they launched a “banzai” type attack against Allied forces. One Seabee Battalion, Naval Construction Battalion 133, “the Kangaroos” lost 40 men killed in action, with another 142 wounded, and one missing in action.

Belleau Wood during World War I, Iwo Jima during World War II, the Chosen Reservoir of the Korea War, and Siege of Khe Sanh during the Vietnam War, are all considered sacred to US Marines. I was honored today, to listen to a concert, and have a cigar with two members of the Greatest Generation who survived one of the bloodiest battles in US History!

I’d like to encourage readers who are eligible to join, but who need more information on organizations such as the VFW, the American Legion, the AMVETS, the Marine Corp League, the Seabee Veterans of America, to contact these Veteran’s Organization on line, call their town’s VSO, or stop by a local post. Increasing membership rolls gives these organizations “strength in numbers” and protects the rights of all Veterans.

John Cuddy served in the US Navy’s Construction Battalions (also known as the Seabees) after retiring from the Navy; he earned a bachelor’s in history and a master’s in economics from the University of Massachusetts on the Lowell Campus. He has been employed in Logistics at FedEx for the last 22 years. If you know a World War II Veteran who would like their story told, please email him at John.Cuddy@Yahoo.com. ◊

Heroes in our Midst, Valley Patriot of the Month