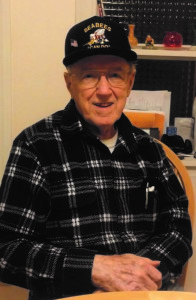 On June 6th 1944, the allied forces stormed the beaches of Normandy, France. It’s been documented that this battle was responsible for nearly 210,000 casualties. This includes US and Allied forces both in air and on the ground.

After the initial battle on D-Day, the reinforcement troops continued to land. By June 11th 1944, the amount of troops dropped onto the beaches was estimated to have been 326,547. Also, 104,428 tons of supplies and 54,186 vehicles were dropped there.

The carnage from the naval combat ships, landing craft, transport vessels and artillery were left abandoned on the beaches for months after the battle. The remnants of steel, aluminum and scrap metal had to be retrieved and shipped back to the United States. This daunting task was given to the Navy CB’s aka Construction Battalion. One of those CB’s was twenty year old James Bradley. 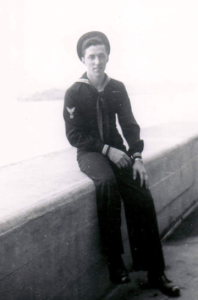 James Edward Bradley was born on August 1, 1924 in Haverhill, MA. One of five children, James grew up in Haverhill. In 1943, during his last year of high school, James quit before graduation to join the Navy.

“I earned all the required credits to graduate, so I had my mother pick up my diploma.” James and all his siblings served in WWII.”

The oldest was his sister, Elaine. She was a nurse on a warship. His brother Paul was a top turret gunner on a bomber, his brother Freddy was stationed on a navy warship and his brother Billy was in the Navy for a year and eventually went to work for Naval Intelligence which later became part of the CIA. The Bradleys were a military family that started with their father who served in WWI.

James Bradley left Haverhill Massachusetts in 1943 for basic training in Norfolk Virginia. From there, he went on to Davisville, Rhode Island. On Flag Day 1943, Bradley was sent overseas in a Navy Troop ship to Newfoundland. The CB’s or Seabees consisted of a group of diversely skilled young men trained in everything from construction to electrical work and plumbing. A unit could range up to 1,200 men.

“Once we reached Newfoundland, we were sent in to build the bases needed for the troops,” Bradley said. “This consisted of leveling roads, breaking down and cleaning out inhabitable spaces along with assorted construction work, rewiring, and plumbing.”

Bradley says they sent him back to Rhode Island for additional training and certifications. It wasn’t long before he was shipped out again on Flag Day, this time in 1944 from New York to Liverpool, England. He recounted how they took trucks down to Plymouth, England where the CB’s maintained the English bases. 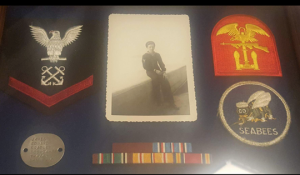 “Our main goal was to retrieve the equipment left on the beaches at Normandy,” he said.

By October 1944, the CB units had constructed a large number of steel cubes each measuring six foot by six foot that interlocked with others, forming a bridge or ramp.

“These enormous pieces of steel were pulled across the English Channel right up to the shores of Omaha Beach. These man made ramps allowed the trucks to cross over the water and onto the beaches to retrieve all of the equipment and metal.”

The cleanup on Omaha Beach took about a month. Bradley then returned to Plymouth, England.

In late 1944, James Bradley and his fellow CB’s took a ship to Amsterdam and then went by convoy to the sea town of Bremen, Germany. 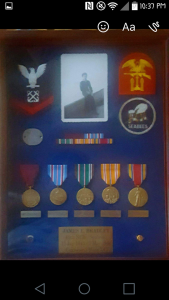 “We took over the areas and made living quarters. We did the electrical work, restored running water and operated large generators.” The troops were notified and sent to stay in the updated quarters.

On May 7, 1945, Germany officially surrendered to the Allies bringing an end to the European conflict in WWII. However, Japan was still fighting the Allied forces with no apparent end in sight. On the order of President Harry Truman, the United States dropped an atomic bomb on Hiroshima on August 6th and a second bomb on Nagasaki on August 9th.

“I was on my way to Guam from Panama to take part in a massive invasion of Japan. But, the mission was called off because of the bombing.” The dropping of the bombs pushed Imperial Japan to finally surrender on August 15th 1945. This date in history is known as V-J Day (Victory over Japan). The war was over and 3rd Class Petty Officer James Bradley, along with all the US and Allied troops, were allowed to go home.

James Bradley served his country in the 69th Naval Construction Battalion from January 13, 1943 and was honorably discharged on March 3, 1946. He was awarded several honors and medals for his service including, the Navy Good Conduct medal, American Campaign, Europe, Africa, ME (Middle East), Asiatic Pacific Campaign, and WWII Victory medal.

After the war, James says he enjoyed subcontracting under General Electric, building engines for fighter jets. In 1951, he became a Haverhill firefighter.

James says he does not belong to any veteran groups or agencies. He said as a firefighter he was a member of the union and received all his benefits through them. Bradley served his later years on the Haverhill Fire Department as a dispatcher. He retired in 1984 after 33 years. He has been a member of the Masonic bodies for over fifty years and says he was Master of the Lodge for many years.

Thank you so much Mr. Bradley for your service to our country and your service as a fire fighter to the City of Haverhill.

One Response to "James Edward Bradley ~ U.S. Navy, WWII ~ VALLEY PATRIOT OF THE MONTH, HEROES IN OUR MIDST"