By ValleyPatriot on August 30, 2018Comments Off on John Gallant ~ VALLEY PATRIOT OF THE MONTH, HERO IN OUR MIDST

The Battle of the Atlantic – Defeating the Nazis on the High Seas! 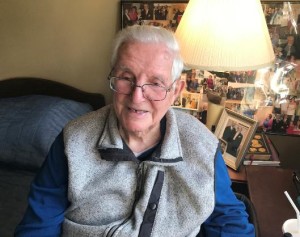 Haverhill’s John Gallant served in the Atlantic Theater of Operation during World War II on the U.S.S Hammann, DE-131. The story of John Gallant’s World War II naval service and that of his ship’s, are very much the same tale. With only eight officers, and around two hundred enlisted sailors, all performing very different but equally important jobs, a World War II Destroyer Escort was simply an extension of the men who served on her.

Destroyer Escort 131 was an Edsall-class ship, built for the primary role of protecting U.S. Merchant Marine convoys against German and Japanese air or submarine attacks. The ship was named after World War I Medal of Honor recipient Charles Hammann, a U.S. Navy enlisted Seaplane pilot.

To drive home to our readers, just how close John Gallant’s naval war came to the Merrimack Valley he grew up in, I did a little research. After a quick search, I found numerous stories of German U-Boats being sunk by the U.S. Navy and the U.S. Coast Guard off our New England shores. A recent one is the Maine’s Press Herald article published in July of 2012 on divers finding the wreck of Germany’s U-550, off Nantucket Island. The Nazi submarine was sunk after a joint attack by the U.S. Navy’s USS Gandy, USS Joyce, and USS Peterson. But not before the U-550 successfully torpedoed the Merchant Marine tanker SS Pan Pennsylvania, sending 140,000 barrels of gasoline destined for Great Britain’s war effort up in flames.

After construction and commissioning, the USS Hammann departed in June of 1942 for Bermuda to conduct post construction shakedown operations, afterwards returning to Philadelphia, Pennsylvania. The ship then sailed to Norfolk, Virginia, and began the first four picket duty passages across the Atlantic to Casablanca, Morocco. This was during the peak of German U Boat activity in the “Battle of the Atlantic”. The ship made several attacks on German submarines, but U.S. Navy records contain no confirmed kills of Nazi submarines by the Hammann.

Serving in the U.S. Navy as an Electrician’s Mate First Class, John Gallant made no less than six more voyages successfully convoying to and from Europe, stopping at ports in Northern Ireland. Later the USS Hammann changed her convoy destination to Liverpool and made four more voyages protecting the vital flow of supplies for allied effort to win and end the war against the Germans. During one trip, the USS Hammann was called upon to aid one of the ships in her convoy, the Merchant vessel, SS Lone Jack, after a the ship was damaged in a torpedo attack. The destroyer escort picked up over sixty survivors and sent salvage parties aboard the stricken ship to keep her afloat. 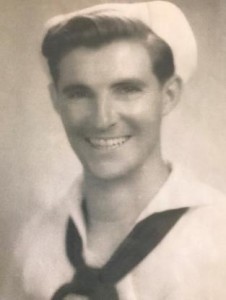 After Germany surrendered, both Petty Officer Gallant and the USS Hammann sailed for Cuba for additional training operations at the Guantanamo Bay Naval Base to get the ship ready for the invasion of mainland Japan. Training of her crew completed, the Hammann transitioned the Panama Canal to join Allied Naval forces in the Pacific. The ship and her crew had defeated the Nazi’s and secured freedom in Europe but was needed for the upcoming invasion of mainland Japan.

After Japan surrendered in September of 1945, the USS Hammann was decommissioned at Green Cove Springs, Florida, and she was placed in reserve. The USS Hammann remained out of commission in naval reserve until she was stricken 1972.

Both John’s ship, and his military service are mirrors of each other, John was a civilian, a recent graduate of Haverhill Trade, brought in to the Navy after Pearl Harbor. The Hammann, a Destroyer Escort, built in just a few weeks, by shipyard workers in 24/7 shifts for the Navy, to avenge Pearl Harbor. John shared his two most vivid memories of the war with me, foremost was meeting his wife of seventy four years at Hampton Beach, New Hampshire. The other, much more painful, was a good friend from the USS Hammann who drowned on a recreational swim in the Panama Canal, shortly before the war ended.
Typical of the “Greatest Generation”, John’s fondest memory of his military service during World War II was coming home after VJ Day. He was already married to his wife Ellen Claire Murphy when the war ended, and the couple had a son. Post War, they contributed to the American “baby boom generation” with a family of one son and six daughters.

And just like the rest of his World War II veteran peers, John came home quietly and focused on supporting his family, first as an industrial electrician for CBS Hytron, later he owned a soft drink bottling company, and finally, ending his working life selling real estate. He was clear in speaking to me, that real estate was his favorite occupation. His family today consists of seven children, seventeen grandchildren, twenty seven great grandchildren, and one great, great, grandchild. He and his wife Ellen spent seventy four years together as a married couple.

Similar to every other interview I have done on the heroes of the “Greatest Generation”, John said little of the Battle of the Atlantic, mainly talking about his family. He played the piano and organ, his wife liked to sing, the house was full of music, love, and children. He said marrying his wife was the only smart thing he ever did in his life. John’s wife used to say, ‘there are words in silence”. Thought provoking and fitting, because I think that during these interviews, all of these veterans are very silent on their own heroics, but, also very proud of the exploits of their comrades, and what they did as a generation, saving both our nation and the rest of the world from tyranny.

John’s interview notes matched the official U.S. Navy records of his ship neatly and perfectly, at ninety eight, his recall of events over seventy five years ago was spot on. Additional thanks to William Wallace, my brother from the Knights of Columbus Catholic Fraternal organization, who was invaluable in setting up this meeting, and very helpful in getting John talking about his U.S. Naval service during and shortly after World War II, his career afterwards, and his family, which was and is John’s passion. In the room I interviewed John, you cannot see out his windows. Why? The window panes are covered top to bottom with family photos.

John Cuddy served in the U.S. Navy’s Construction Battalions (also known as the Seabees) after retiring from the Navy, he earned a BA in History and an MA in Economics from the University of Massachusetts on the Lowell Campus. He has been employed in Logistics at FedEx for the last 21 years. If you know a World War II Veteran who would like their story told, please email him at John.Cuddy@Yahoo.com.

Hero in our Midst, John Gallant, Valley Patriot of the Month