By Tom Duggan on January 2, 2021Comments Off on John Ratomski World War II US Navy Seabee and New York City Cop ~ HEROES IN OUR MIDST, VALLEY PATRIOT OF THE MONTH 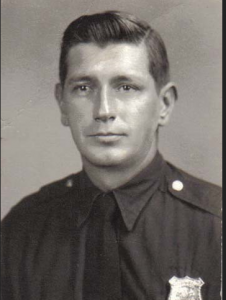 Retired New York City Police Officer, John Joseph Ratomski, tried to enlist in the Marine Corps the year after Pearl Harbor, in December of 1942. Joe, as he was known to his friends, was found to be color blind, and the Marines rejected him for this reason.

The US Marine recruiter told him about the newly formed construction unit known as the US Navy Seabees. The first units were organized in Quonset Point, Rhode Island on March 5, 1942. Joe was born on June 5, 1922 in the Bronx, New York City, NY, making him twenty at the time of enlistment.

Upon completion of US Navy Basic Training, he was assigned to the 6th Special Naval Construction Battalion, a Seabee Combat Stevedore Battalion. In May of 1943, he was deployed to the South Pacific with the 6th Special Seabee Battalion. This unit has the distinction of being the first Special Seabee Battalion to participate in an amphibious landing, under hostile fire, at Vella Lavella on October 1, 1943 in the Solomon Islands. He later described his delight to his family, his learning that two ships in his convoy are loaded with frozen Thanksgiving turkeys, both arriving on Monday November 22, 1943.

Days later, on November 29th, as he described events years later to his son, Joe recalled his comrades shooting at night at a group of Japanese planes attacking them, from his position, he could see the tracers were “too low to stop the attacking planes”.

Nearly eighty percent of the nearly 500,000 men who served in the Seabees during World War II, served in the Pacific Theater. Hollywood, focused on the war in the South Pacific, with Republic Pictures, releasing the film, “The Fighting Seabees” starring John Wayne and Susan Hayward in 1944. 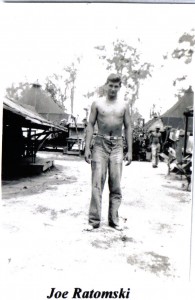 But Seabees entered the Pacific war much farther North in Alaska and the Aleutian Islands. The Japanese captured the islands of Attu and Kiska. Seabees sent to the Aleutians were there to help forestall what appeared, at the time, to be a major Japanese offensive. By late June 1942, they had begun building bases on the islands of Adak and Amchitka. Soldiers, Airmen, Sailors and Marines would serve on those islands as a deterrent for the remainder of the war.

Note: I served with the Seabees, forty years later, on Adak Island during 1980 and 1981, and remnants of World War II were still scattered all over the islands. While I was up there, the US Department of Fish and Wildlife, while conducting an outer island survey, found the remains of a US Army soldier that had been missing in action since World War II. The soldier’s rifle was still with him, and his military ID and some US Currency was found in his shirt pocket. His remains were returned to his family.

After forming in March of 1942, Seabees crossed the Atlantic Ocean, and North Africa was the site of the Seabees first combat action in the European theater. Landing with the assault in November 1942, they built facilities at Oran, Casablanca, Sifi and Fedala. Later, they would build a string of staging and training areas along the Mediterranean including NAS Port Lyautey, Morocco. Naval Air Station Port Lyautey stayed in operation serving the US Navy until 1942. Seabees served throughout the Mediterranean and Europe during the war, including the Normandy landings.

Joe remained in the 6th Special NCB as a Seaman 1st Class until the end of the War and was honorably discharged from the Navy in 1946. After Japan surrendered, he returned home to New York where he married. He and his new wife had four children. Joe served his community and nation, as a policeman on the New York Police Department and worked in the Bronx, New York.

In 1956, he received the Medal of Valor for an incident on December 19, 1956. The Medal of Valor is the third highest Valor award conferred by the New York City Police Department. After a distinguished career that spanned over 30 years he retired as a Detective (1st Class).

While leading an exciting life as a Navy Seabee and New York City Police Officer, Joe and his wife had two sons and two daughters. They also have six grandchildren. Joe Ratomski passed away at Westbury, New York on his birthday in 1988 at sixty-six years old. Joe’s family is scattered all over the Northeastern United States today! Planning in January, to write the second part of this article, featuring a local man, who became a Seabee, and now serves as a Boston police officer, his service separated from Joe by seventy-five years, but little else!

Merry Christmas and Happy New Year to all!