By ValleyPatriot on January 29, 2021Comments Off on KANE ON THE COUCH ~ Emotionally Exhausted Let’s Talk Mental Health During The Pandemic 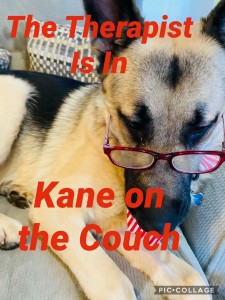 Kane turned off the news the other day after watching conflicting information on the Coronavirus that made his jaw feel tense and his mind feel foggy. He was tired from overthinking. Wow we have been doing this stay in your doghouse thing for a long time.

What is a dog to do with this information?

Kane feels like his world was getting smaller and the virus, well it seems like it was getting bigger, or is it? Kane knows to stop himself when he goes down the rabbit hole of overthinking:  This can lead to thinking about worse case scenarios.

Catastrophic thinking he knows is a waste of time and extended time in front of the news only makes matters worse. Kane decided to take a step for his mental health, he stays informed but then turns the news off in search of other positive ways to use his body and mind. Besides, those thoughts only go in a circle, it’s a circular trap with no way out.

It goes in a circle like the toilet water his human will not let him play in.  Kane from now on will stick with facts. His human has a magnet on the fridge that says worrying is like a rocking chair, you are doing something but going nowhere. (author unknown)

Kane is going back to basics. See, he has been in fight or flight mode for a while. He has been running through the obstacles like a sprint but the pandemic has been more like a marathon. He is prioritizing normalized eating (three meals and two snacks, dog treats in moderation) maintaining a sleep schedule, and walking 30 minutes a day. Not counting chasing squirrels, (bonus points), Kane decided that he counts too, so honoring his body with good habits is a priority.

He is trying to give up his habit of eating his poop. It doesn’t really make him feel very good. “I’m trying to be a good boy.” This is like watching his human trying to get everyone to eat more vegetables, we kind of ignore her, but she means well. Since nothing goes perfectly, Kane is patient with himself when it doesn’t go great, he tries to get back on track the rest of the day. It’s more like problem solving and being aware instead of judgment.

Sometimes Kane tries to get away from his feelings because they are hard to sit with. When he pretends, he doesn’t miss his summer neighborhood friends, his anger comes out in other ways. He tries to get in the trash, or hides toilet paper from his family, or he gets mouthy.

When he acknowledges he feels isolated or lonely from peers he accepts his situation and can move towards his value. Kane did some research and learned that dogs are social beings like people, there is nothing to be ashamed about if you feel kind of down from being isolated, it is a normal emotion in an abnormal situation. Kane knows it’s important to stay in contact with others in his family and community. He tries hard not to be an all or nothing thinker so he has opened his mind up to talking on the phone, and zooming with his friends. This is better than no contact at all.

Kane also gets pleasure from helping other dogs and humans. On his neighborhood walk he lies on the ground when another dog approaches and says hi first. He used to be shy but not anymore since going to Camp Wignal for dogs only. He learned if you are nice to other dogs, many are nice back. He has mastered the play bow which is like saying a people hi with a smile. Kane knows other dogs and people are lonely too so being kind to others and sharing when Kane can be helpful makes Kane feel productive, useful, and confident.

Kane has been brave and has been trying to fill his time with new hobbies that he can do by himself or with other people in his family. He tried fetch but he isn’t a fan. His human throws the stick then he taps it with his nose and runs back, then his human runs and gets the stick. He finds this boring. He just watches her run around. However, he likes woods, walks, being outside in nature makes his world seem larger especially if he finds new places to explore. He also likes riding in the car.  He keeps his mind sharp by learning new things at dog school and doing tricks for his humans. Really, he has known how to sit for 9 months but he likes the good boys he gets. Maybe his humans, don’t know how to sit, but he does.

He learned that when he feels anxious, he tries to be mindful and find the present moment. Like Kane said before, sometimes when you spend a lot of time alone you think too much.  He is learning to understand his past, live in the moment, and look forward to the future. Kane practices mindfulness by breathing, checking in and appreciating everything around him, and doing yoga.  He sits on the mat and lets his thoughts and troubles melt away. He is especially good at downward dog.  Pulling his human’s hair and running off with the iPad didn’t go over well. Also, nobody said “Down” so I didn’t really know why she was lying there. It was good of me to try to revive her.

I guess being creative has a positive effect on the mind. To be honest nobody Kane lives with or visitors appreciate him opening closed bathroom doors. He truly thought he was using his thinker but it went unappreciated. His human friends write, journal, draw and some paint and build things. He likes to watch this and is careful not to step on their creations.

Anyway, signing out now for the month of January. Kane wants everyone to have a happy and healthy New Year and remember everyone is important and worthy of their love and affection.  His message is acknowledge and sit with your feelings, find a hobby, stay connected, get back to basic self-care, do things for others, stay mindful, be aware of your fears and move towards your value, and be kind. A word to the wise get up take a shower and prepare for your day because nobody likes a stinky puppy.
◊