By ValleyPatriot on November 29, 2020Comments Off on KANE’S CORNER – Donald Jarvis, Serving Those Who Serve 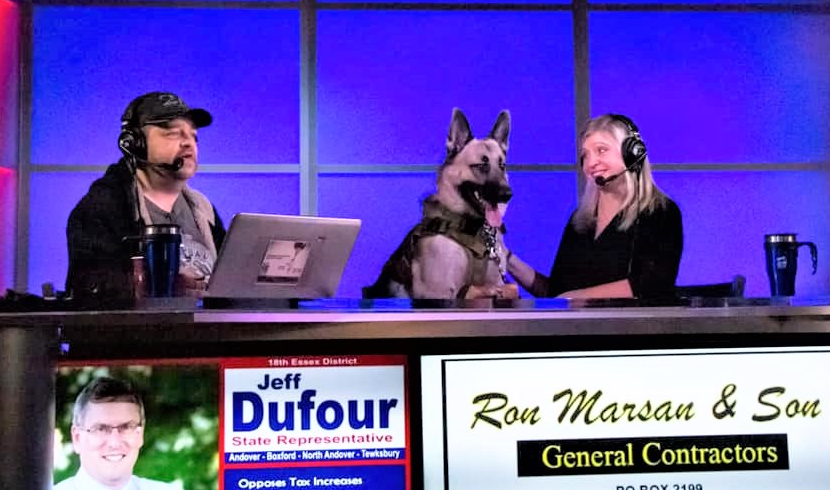 The Valley Patriot’s newest columnist, Kane (and his mom Denise) making his first appearance on the Paying Attention! Podcast at the Studio 21 Podcast Cafe’ in Salem NH. Kane defeated Winston in our readers’ choice election last month, to replace Freddie who passed away from the doggie Coronavirus. 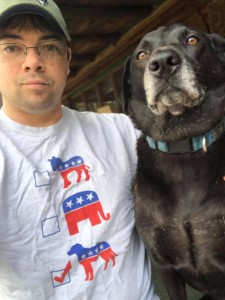 Kane met with Donald Jarvis to ask two important questions. What challenges do service members face coming back from a deployment? What recommendations would you have for military members returning to civilian life.
His answer; “We can always do a little more for someone else: and in return help ourselves , through the satisfaction of knowing you provided service to someone that needed it.”

Kane reports Donald Jarvis is no stranger to the challenges service members face transitioning back into civilian life after deployments. Jarvis like many returning service members wanted to get back to feeling like himself again, feeling like he belonged in the civilian world, and connecting to others and his community.

During deployment, Jarvis suffered a traumatic brain injury after an IED explosion and found himself in a system of trying to heal through prescribed medications and self-medication; through alcohol abuse to quiet the symptoms. After years of feeling isolated from his life, Donald Jarvis traveled a journey back to himself by serving other veterans.

Kane said Jarvis discovered passionately serving others in combination with practicing life skills such as mindfulness, and caring for and loving his loyal family member Mocha the service dog, was a true recipe for success. Kane would like to meet Mocha. He sounds amazing.

Jarvis reports Helping other Veterans acclimate back to civilian life is a wonderful purpose. Jarvis states: “Many veterans feel alone in a room full of people. They are embarrassed to admit they feel disconnected from friends and family. Having a “battle Buddy” to navigate these feelings and normalize their situation has extreme importance to transitioning back to civilian life. What better person to provide this support than someone who has been there and done that. Kane nods his head in agreement.

A cause close to Jarvis’ heart is helping the homeless veterans and those who find themselves caught up in the court process. Jarvis felt at one point he was one step away from being in this situation himself. Jarvis has helped many veterans find much needed resources, such as housing, meals for the homeless, clothing, and resources through the veterans’ association and the community.

Since each veteran has different needs, he provides one on one support such as attending court hearings, or going to medical or resources based meetings. What does he encourage veterans to do to heal, help others! Jarvis states, “Continue on the path of serving your community as you did in the military. This type of service is part of their make up.”

Donald reminded us that it is fine to not feel ok or normal. It’s acceptable to say you are having a tough day and acknowledge it. Being aware of how you are feeling, and a plan or healthy coping skill to manage feelings is the way to go. Kane thought this was good advice.

Donald fondly described his service dog, Mocha, who has been such a part of his journey back to feeling like himself. Jarvis and Mocha were paired up through Operation Delta Dog; a nonprofit organization in Chelmsford, Mass, that pairs homeless dogs with Veterans. What Jarvis thinks is amazing about Operation Delta Dog is the veteran is a critical part of the dog training, which is a long and rewarding process. Kane agreed he likes to hang out with his humans too.

Kane asked, “How does Mocha help?” Jarvis reports, “Mocha forced me out of my bedroom, helped me find a non-pharmaceutical way to sleep, and provided me a sense of comfort as I ventured back into the world for life events and speaking engagements.” Jarvis said, “He is a good listener and checks in with me. Mocha helps with PTSD in general. Really who rescued who?” Kane thought, good question I guess they rescued each other.

So the service that Jarvis provides doesn’t stop there. Recently he has written a Children’s book called Mocha the “Super Hero Service Dog. “This Book can be purchased on Amazon. The book talks about Mocha’s history of being in the street, in the shelter, and the hard work we did together in training to become partners.

Donald Jarvis is also quite an activist for Veteran health. He was instrumental in passing a bill two years ago that provides emergency medical care and ambulance services for veterans. Jarvis reported, “Medical bills were often a barrier to veterans getting the help they needed and created a large financial burden for many.”

In summary, Jarvis reports “Today I am the person that understands battle buddy for the internal fight at home. “I try to be what I wish I had when I returned. Since 2013 I have worked to build relationships far and wide numbers of services throughout the state.”

“Jarvis stated, “When you open yourself up, you make that connection with the veterans that you serve. They get the sense that you understand them so communication is more open and less guarded. “according to Jarvis. Kane reports Jarvis made sure we let people know that he is available to reach out to. In fact, it was important to him that we shared his email in this article. Jarvis.don@gmail.com

“You never know when you can be of service to someone.” , Jarvis said “Kane believes this gentleman is truly an inspiration. Thank you for your service to this great country and community”, Kane said.

Kane decided after meeting Donald Jarvis that he will read his book about he and Mocha and hit the trails to Support Walk and Wag for Veterans through Operation Delta Dog. Kane wanted to do his part to make a donation for courageous veterans and homeless dogs to make a forever partnership and do great things like Donald Jarvis and Mocha. Time to get moving. ◊