By ValleyPatriot on April 7, 2019Comments Off on Kasper Joseph Kfoury, Petty Officer 2nd Class US Coast Guard ~ HERO IN OUR MIDST – VALLEY PATRIOT OF THE MONTH 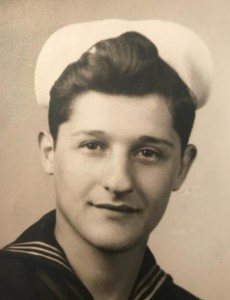 Lawrence’s Kasper Kfoury was present at two of the most iconic events that took place during the twentieth century in the United States. He, his brother and some friends took a train to New York’s Yankee Stadium on July 4, 1939, and they were sitting in the stands when New York Yankee First baseman Lou Gehrig delivered his retirement speech to the fans, a speech that has been called by some as “baseball’s Gettysburg Address” to a sold-out crowd at Yankee Stadium. The other famous event? He was in New York City’s Time Square on August 14, 1945 for the VJ Day celebrations. The Second Class Petty Officer had just got off duty serving as Port Security on the Brooklyn Piers. He told me he was not the sailor in the famous Alfred Eisenstaedt photograph, the one of a sailor kissing a nurse in Times Square, but it was someone else instead.

Kasper and I talked about the ethnic makeup of the Lawrence of his youth. Truly a city of immigrants, Lawrence during the Great Depression had many ethnic enclaves, where life often centered on the ethnic church in their neighborhood. The French had Sacred Heart and Saint Anne’s, the Irish attended St. Patrick, St. Mary’s, Immaculate Conception, Saint Augustine, and St. Lawrence’s, the Germans belonged to the Assumption of the Blessed Virgin Mary, the Portuguese attended the smaller St. Peter and St. Paul’s, the Italians lived and worshiped around Holy Rosary, the Polish attended school and Mass at Holy Trinity, the Lithuanians, had a school and a church at St. Francis. The Kfourys were Arabic, specifically Lebanese. Lebanon was part of Syria, which was part of the Ottoman Empire that the Allies broke up after World War I. The Lebanese attended either St. George, an Antiochian Eastern Orthodox Church, St. Joseph Melkite Greek Catholic Church or St. Anthony Maronite Church. During the Depression and World War II, Lawrence also was home to many Protestant Churches and the Jewish families established several synagogues and a community center in the city, mainly on Tower Hill.

While the two of us where talking, I tried to get a feel for life in Lawrence during the Depression and World War II. Kasper’s eyes lit up when he told me of attending fifteen movies in fourteen days watching them at the Palace, the Broadway, the Strand, and the Modern on Lawrence’s famous theater row. He graduated from Lawrence High School in 1940, the school’s largest class ever, and then we reminisced about crowds of 10,000 plus at Lawrence vs Lowell, and Lawrence vs Haverhill football games.

He also talked about working in a Sign Shop, and the now illegal “shape ups” that occurred in front of the gates of the Lawrence Textile mills each morning during the Great Depression in Lawrence. The mill owners and their supervisors would walk out the gate each morning, and select labor from the large crowd of men and women that stood outside the gate of the mill looking for work. Low pay, no benefits, the immigrants and their families were glad to just get paying work to feed themselves.

He grew up in Lawrence during the Depression, with two brothers and a sister, living above a restaurant on the corner of White and Oak streets. He enlisted in the United States Marine Corp a month after the Japanese attack on Pearl Harbor. He and his friends were in an auto accident, and he was hospitalized with extensive injuries particularly to his face. Two US Marine military policeman visited him in the hospital and decided that he was too badly hurt to report for basic training. He recovered enough by October of 1942 to join the US Coast Guard. After completing basic training in Manhattan Beach in Brooklyn, NY, the men in his company were divided into two groups. One group was sent to LST Training, and most of those men participated in seven different invasions in the Pacific Campaign. Kfoury’s group was sent to Port Security Training, and he spent the war guarding critical docks, piers and harbors around Brooklyn, New York.

We discussed the incident when the Amagansett Coast Guard Station’s Ensign John Cullen’s had an unarmed encounter with four German service members who landed on a Long Island beach shortly after midnight on June 13, 1942, on a submarine commanded by German Navy Captain Hans-Heinz Linder, the U-202. The unarmed officer had the presence of mind to race back to the Coast Guard Station for help, and shortly after they landed, the four Germans were captured.

The group that was sent for LST Training in Norfolk, Virginia, may have included men such as Douglas Albert Munro, an immigrant from Canada, who was awarded the Medal of Honor for saving the lives of hundreds of US Marines during the Guadalcanal Campaign. To date, Signalman First Class Munro is the only member of the US Coast Guard to earn the Medal of Honor.

Most readers are probably not as familiar with US Coast Guard Ratings, so I consulted the US Coast Guard Enlisted Ratings guide published by Dana Lewis, Chief Warrant Officer, Boatswain, USCG- Retired. Kasper served as a Specialist Port Security. Petty Officer Kfoury was part of an elaborate Nationwide Port Security program; he was assigned to Brooklyn New York’s Piers and Docks. His rank when Japan surrendered was Petty Officer Second Class, his rating was Port Security
U.S. Coast Guard Reserve Security Ratings

Specialty Mark of Shield w/PS until 1982. Rating to be dis-established in 2010 and Most assigned Coast Guardsmen will lateral change their rating to Maritime Enforcement Specialist.

Kasper’s been married to his wife Joyce for sixty-six years, and they have five children and fourteen grandchildren. Sharp as a tack at ninety-five, I asked him if he knew the names of the hills of Lawrence, he rattled off Clover, Prospect, Tower and Phillips. Something I have been trying to learn for years. We debated the best Lebanese food in the Merrimack Valley and while he enjoys the food at the Sandtrap Bar and Grille at the Merrimack Valley Golf Course, I prefer Sahtaine in Methuen resulting in a tie.

Talking with one of his sons, he told me Kasper recently toured Brooklyn, which he had not visited since his discharge in 1946, with two of his grandsons who live in New York and stunned them with the way he navigated New York City, especially Brooklyn at 95!

John Cuddy served in the US Navy’s Construction Battalions (known as the Seabees) after retiring from the US Navy; he used his GI Bill and earned a BA in History and an MA in Economics from the University of Massachusetts on the Lowell Campus. For the last twenty-two years, he has been employed in Logistics at FedEx. If you know a World War II

Veteran who would like their story told, please email him at John.Cuddy@Yahoo.com ◊