I recently spoke with Myra Ortiz, who will be running against incumbent Sandy Almonte. Myra has made Lawrence her home for 15 years and currently represents District A on the School Committee.

Although the school system is under receivership, Ms. Ortiz has a productive relationship with Receiver Jeffrey Riley and feels that the committee members have many opportunities to make a positive impact. One of her priorities is developing partnerships that expose students to leadership opportunities in civic engagement. This month she plans to escort 45 students from the Arlington School to a Congress for Girls, which encourages girls to get involved in politics.

Myra has been an associate at the Mayo Clinic in Andover for 13 years, working in talent acquisition and business development. She has a Bachelor of Science in Organizational Leadership from Southern New Hampshire University and an Associates Degree in Business Management from Northern Essex Community College.

Ms. Ortiz doesn’t support the infamous no confidence resolution that’s still on the table and would not be a supporter of a mayoral recall over the residency requirement.

She was one of the honorees at the Greater Lawrence YWCA’s Tribute to Women 2015 for her work with numerous community organizations. I think Myra Ortiz is a capable, intelligent and responsible person who would do a good job as a councilor.

If you live in District A, she deserves serious consideration for your vote. More information will be found on her website which will be launched soon. 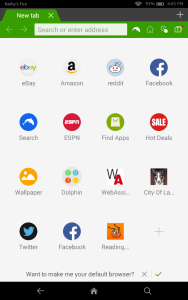 Does anyone else have questions that keep nagging them? One question I have is the identity of this dog. Does anyone recognize it? If you know whose dog this is please email me at freda666@hotmail.com. This is the icon I get when bookmarking City of Lawrence web pages using the Dolphin browser. Other browsers give the usual icon.
The other thing I kept wondering about was if the City Council ever forwarded my complaint alleging a violation of the Open Meeting Law (OML) to the Attorney General’s Office (AGO) as required by law.

On January 15 of this year I filed a complaint alleging the Council violated the OML. The details of the complaint were given in my February 2015 column. The Council should have forwarded a copy of my complaint along with any remedial action taken to the AGO within 14 business days. The filer may forward the complaint to the Division of Open Government in the AGO’s office after 30 days if they feel the response was inadequate.

I saw no evidence of any response by February 17, so I called the Division of Open Government to inquire as to the process of forwarding my complaint to them. They suggested I first reach out to Council President Maldonado and ask him if he was going to respond and requested I mention that their office had not received a copy of the complaint.
On March 2, I wrote a letter to the Council President indicating I had received no response and asked if a copy of the response that should have been sent to the AGO could be sent to me. I neglected to mention that the AGO hadn’t received any materials regarding my complaint.

Just as I was getting ready to contact the state again, I received a response from Council President Maldonado along with a cover letter from City Attorney Boddy. The response from Maldonado was a letter addressed to the Attorney General dated January 21, 2015.

City Attorney Boddy’s cover letter stated that Maldonado’s response “indicated” that it had been sent to the AGO and a carbon copy was sent to me on the said date. What does that mean, at some time someone typed ‘January 21, 2015’ into a computer? That’s another one of those pesky questions that keep nagging me.
For many reasons I didn’t think Council President Maldonado’s response was sufficient. I won’t get into all of the details here, but as the entire Council was named in the complaint I felt that some discussion should have occurred at the council level.
I kept wondering, did the AGO’s copy also get lost in the mail? Did the Council President finally forward the complaint as was required or just give me a copy of a letter supposedly sent to the AGO? I forwarded my complaint to the Division of Open Government in early April just to make sure they received a copy.

Guess what? I received a call from the Division of Open Government a couple of weeks later and their copy was still nonexistent! You would think that the Council President would’ve checked to see if they had received their copy after realizing I hadn’t received mine.

If the response I received had been dated sometime in March I wouldn’t have been happy, but what can you say in a situation like that? Instead we’re supposed to believe that both the Attorney General’s copy and mine were “lost in the mail.” I’ll let the reader form your own opinion regarding this matter.

Kathy Runge is a Lawrence activist and a former candidate for Lawrence City Council. She is also the recipient of The Valley Patriot Editor’s Choice Award for excellence in writing.