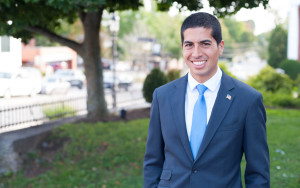 ANDOVER, MA – Laborers Local 175 and Laborers Local 609 both endorsed Dan Koh today in the 3rd District Congressional race. Local 175, based out of Methuen, represents more than 1000 members and Local 609 represents over 500 members. In total, Koh has received endorsements from seven unions, more than any other candidate. Koh has also been endorsed by IBEW Local 96, IUEC Local 4, Laborers Local 88, Building Wreckers Local 1421, and Operating Engineers Local 4.

“Our members know that Dan will stand up for workers,” said Business Manager of Local 175 Michael Gagliardi. “Dan has a detailed plan to create jobs and raise wages throughout the Third District. He will work to build an economy where everyone can get ahead.”

“We are proud to support Dan,” stated Business Manager of Local 609 Christopher Murphy. “Dan has the experience, skills, and commitment to get things done for working families.”

“I am grateful to have Local 175 and Local 609’s support,” said Koh. “These two unions work every day to protect workers’ rights and expand economic opportunity. The Laborers’ apprenticeship program helps provide a pathway to a good-paying job in the construction industry. As Congressman, I will work with local officials, unions, schools, and businesses to scale and expand successful programs that bridge the skills gap.”

About Dan Koh
A native of Andover of Korean-Lebanese descent whose great-grandparents came to Lawrence over a century ago, Dan is dedicated to preserving the American Dream that made his own story possible. Dan most recently served as Chief of Staff to Boston Mayor Marty Walsh, where he managed 18,000 employees and a $3 billion budget during one of the most prosperous four-year stretches in Boston’s history. In Congress, Dan will stand up to President Trump and promote universal healthcare and a forward-looking jobs program so that everyone can get ahead.