By Tom Duggan on July 2, 2007Comments Off on Laboy: Race Politics is Ruining Lawrence 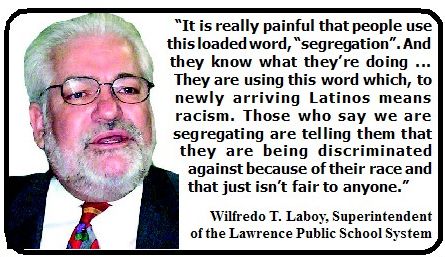 Lawrence Superintendent of Schools Wilfredo Laboy has been under fire by critics over the last month for his decision to house newly arrived immigrant students with lack of English proficiency in the “old” high school building on Haverhill Street once the new $110 million campus is officially opened.

Teacher’s union president Frank McLaughlin has publicly protested Superintendent Laboy’s decision calling it “segregation,” a word that has spread like wild fire in the Spanish Language media in Lawrence.

“Latino activists” have taken to the radio waves calling Laboy a racist and likening his decision to the racial segregation of the 1960’s. Spanish language newspapers also jumped on the bandwagon to brand Laboy a “segregationist,” arguing that Laboy was purposely denying “Latino” school children the privilege of getting an education at the new high school campus.

“This community needs to come to grips with its diversity,” he continued. “We need to have inter-group relations in Lawrence and we have to stop blaming each other, stop whipping up racial resentment, and put an end to the racist allegations that always seem to be made in Lawrence.”

“We need to pick ourselves up and do what’s right. Everyone has the same opportunity in America and using the word segregation to describe a program for at risk immigrant kids who are temporarily housed in a separate building is just plain wrong. It conveys to new immigrant children that they are being picked on. And because they don’t know any better this word ‘segregation’ continues to get repeated and believed as if we were holding classes for white privileged kids in a brand new building while excluding poor Latinos in a second class, dilapidated building. That’s just not happening and as a Latino myself I resent the accusation.”

According to the Massachusetts Department of Education more than 90% of the students attending Lawrence high School are Latino.

Racial Segregation is Different from Segregating Based on Need

“I don’t think segregated is a good word to describe what we are doing here in the Lawrence Public Schools. We do categorize and differentiate individual children by their level of ability. That’s a standard practice in any school system,” Laboy said.

“In any community you have kids with special needs, whether it is Andover or North Andover, or anywhere else. Kids with special needs are ‘segregated’ in a separate room where they can be attended to. So the notion that we separate kids based on their needs is not new to the American educational landscape. It is really painful that people use this loaded word, “segregation”. And they know what they’re doing. They are using a word that goes to the heart of racial segregation which came out of Brown vs. Board of Education. They are using this word which, to newly arriving Latinos means racism. Those who say we are segregating are telling them that they are being discriminated against because of their race and that just isn’t fair to anyone.”

Laboy says the school system looks at the “educational profile of the individual student as they come in to our schools” and then places them accordingly. We are segregating, or separating if you will, based on individual need and, yes, the majority of our non English proficient immigrants are Latinos. But there are dozens of other countries being represented by our newly arrived students. We have children coming from Eastern Europe, the Middle East, South East Asian countries and elsewhere. So to suggest that there is an effort here to deprive Latinos of anything is blatantly false.”

Exactly What Programs Will be Housed on Haverhill Street?

According to Superintendent Laboy there will be at least five programs housed at the “old” high school on Haverhill Street which will be called the High School Learning Center; Credit Recovery, the Newly Arrived Program, Diploma Plus, the Adult Learning Center, and the School for Exceptional Studies. The school will hold 600-650 students.

The Newly Arrived Program: “Normally we get between 120-150 newly arrived students from other countries. Of those, more than half stay for a year of transitional programming, about ¼ of those kids make a mid year move. The students are evaluated and moved to other program as they progress.

Diploma Plus: “This program is for kids with personal challenges in the system. They are between the ages of 16 and 22 who want a traditional MCAS diploma but can’t be in a regular classroom because of the personal challenges they have. We only have 25 students in that program now but we are expanding it to 50 to 75 kids.”

Laboy says that many new students are “out of age and out of grade. What that means,” he explains, “is that we get about 25 or 30 kids each year who are seventeen or eighteen years old, but the last time they attended class in their native country was the third grade. Under the 14th amendment to the U.S. Constitution it states that it is the responsibility of the state to educate its citizens. So we have this thing called ‘compulsory education.’

From age 6 to age 16 we are charged with educating every child that comes through our doors. But we have many children who come to us at age seventeen or eighteen. We are not required under the law to put them in a day school program but, because we are a moral country and we have a moral obligation to help these young people, we take them in. We assess them, and we place them in the program that best suits their needs and that’s a general education diploma. We certainly can’t take a 17 year old and put them in the fourth grade, which might be their academic grade level.”

Credit Recovery: This is a program for students in the tenth grade who don’t have enough credits to graduate. Laboy says that these students are put into an accelerated course program designed to accommodate their workload with what is called flex scheduling. Some kids will stay there for the rest of their high school experience, some kids will recover the credits they lost or never took and get back on track within a short period of time.”

The Rest of the Story/Dispelling the Myths

Laboy says that placing at risk students at the High School Learning Center on Haverhill Street is going to be a vast improvement for those currently enrolled in these programs. “People can complain and criticize what we are doing with at risk students, but look at where we are taking them out of? We are taking them out of trailers that are sitting on the playgrounds of a school and putting them into a building that has a library, a gymnasium, science labs, computer labs and all of the things they are not getting where they are right now. How come the people who are calling this ‘segregation,’ aren’t telling the community that part of the story? When we say we are putting them in the old high school building, and then the nay-sayers paint a picture of a crumbling structure, lets look at where these kids are now and the real condition of that school.”

“Now, there’s another myth I would like to dispel,” Laboy said emphatically. “And that is the notion that every single newly arriving immigrant is going to be stuck at the old high school forever. We have young people coming to us with basic native language skills, who got a formalized education in the country they come from, and are able to mainstream a lot faster than some of the other immigrant children, so they will be moved out of the program.”

“Then we have other children who come in close to age and grade level, but they don’t have the English skills they need to be in a regular classroom. I say we have a professional, moral and ethical responsibility not to house them in a place where they are going to fall further behind. I have an obligation as the Superintendent of this school system to make sure that these kids have the best possible chance to succeed. Now I ask you, is brick and mortar really the issue here? Is it really all that terrible that newly arriving students are being housed separately until they are fully prepared for a mainstream classroom? Or is this about something else completely?”

“It didn’t seem to bother these same people who are complaining now when we had bilingual classes that segregated kids based on their language. They fought against ending ‘segregated’ bilingual classrooms. Some of the very same people calling this ‘racism’ were out there holding signs that said ‘Vote No on Question #2’ remember that? Just a few short years ago segregation was great, but somehow they see it differently when Wilfredo Laboy wants to separate students based on their individual needs and educational assessment.”

“Sure, I could send these kids to that beautiful new campus in a regular classroom without the special attention they need and they will do what kids have been doing for years; nine out of ten of them are going to walk away … just walk away. We can either pay now or we can pay later. We all know what happens to those kids who drop out and the price we pay as a society when they are out in the real world with no skills. They become delinquents, criminals, they become a social liability to society, and we pay far more in the end. I say we give them what they need now. Because the tragic reality is, for newly arriving non-English speaking students over a four year period of time, the dropout rate for Latinos is about 50%, and for at risk students it is closer to 80%.”

“Instead of labeling people ‘racist’ and using divisive language in a debate like this we ought to be asking those who are complaining: what is your responsibility? And what is our collective responsibility as a community? I refuse, as the Superintendent of schools, to accept failure and mediocrity as an option. I believe the good people of Lawrence, those who really care about providing a quality education, agree with me. But for that handful of people who are using the race card, talking about our ill treatment and ‘segregation’ of our students, I have to ask; what solutions do you have? What kind of role model in this community have you been? What constructive engagement have you been involved in to help us educate these children properly. How are you promoting positive race relations? There is along way to go within certain pockets of this community. They have an agenda and they are going to promote hate and division in any way they can to achieve a political end. I say race politics is ruining this city, I have never seen anything like it and I came to this city from New York.”

“It’s really infuriating, Laboy concluded, “when you sit down and think about the fraud that is being perpetuated on our newest and most vulnerable students. We need to stop the politics of race, it is ruining this city. You know, I used to hear a phrase all the time when I first came here to Lawrence and it used to make me angry. The phrase was ‘only in Lawrence’. Now I know exactly what they were saying.”

Superintendent Laboy says he is moving forward with his plan to place at risk students at the High School Learning Center despite the criticism and harsh language used to derail his plans.