By ValleyPatriot on October 28, 2013Comments Off on Language of the PAWS ACT, Protecting Animal Welfare and Safety – Section by Section Summary 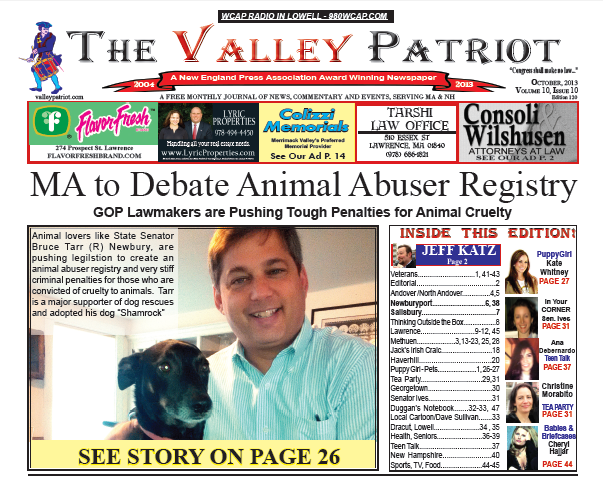 SECTION 1. Authorizes the Homeless Animal Prevention and Care Fund, which consists of revenues received from a voluntary tax check-off, to collect and expend money for the care and protection of abused animals.

SECTION 2. Requires the State Police or their designee to establish and advertise a toll-free telephone hotline and website for reporting suspected cases of animal cruelty.

SECTION 3. Imposes a fine of up to $1,000 on any veterinarian who knowingly and willfully fails to report a suspected act of cruelty to an animal. Also requires that the veterinarian be reported to the Board of Registration in Veterinary Medicine.

SECTIONS 4 & 5. These sections amend, respectively, MGL Chapter 266, Section 112 (maliciously killing, maiming, or disfiguring any animal or exposing them to poison) and MGL Chapter 272, Section 77 (cruelty to animals) by expanding fines and jail time for repeat offenders or cases involving aggravating factors. (NOTE: The penalties associated with these crimes were last increased in 2004.)

The court may, at its discretion, expand these penalties for up to 5 additional years imprisonment and an additional $10,000 fine based on a finding of the existence of aggravating factors, including but not limited to:

• the number of animals involved;

• the degree of premeditation or planning;

• whether the abuse occurred in the presence of a child;

• whether the abuse occurred as a result of acts undertaken for financial benefit (i.e., dogfighting); and

• whether the abuse was systematic or isolated.

SECTION 6. Increases the hit and run penalty for motorists who strike and injure or kill a dog or cat and fail to report the accident to the animal’s owner or the local police. Current law imposes a $50 fine for a violation of this section, but this bill would set the penalty as imprisonment for not more than 60 days, a fine of not more than $2,000, or both.

SECTION 7. Improves the judicial process involving the cost of caring for abused animals during the time the animal is held and being cared for until the case is adjudicated. It allows a district attorney to file the petition for bond and acknowledges the substantial expenses and unexpected events that can be incurred before a judicial determination.

SECTION 8. Creates a statewide registry of individuals convicted of animal abuse crimes, to be administered by the Department of Criminal Justice Information Services and made available to animal shelters, breeders and pet stores. Requires all offenders to register within 10 days following either the date of judgment or their date of release from incarceration, whichever is later. Also requires out-of-state residents convicted of an animal abuse crime to register within 10 days of moving to Massachusetts.

Individuals who fail to register within 10 days, fail to verify their registration information, fail to provide notice of a change of address, or knowingly provide false information would be subject to imprisonment for up to 2 ½ years in a house of correction, a fine of not more than $1,000, or both for a first offense. A second or subsequent offense would be punishable by imprisonment in the state prison for not more than 5 years.

Any animal shelter, pet store or animal breeder that fails to check the registry or knowingly offers, sells, delivers, gives or provides an animal to any individual registered on the registry would be subject to a fine of not less than $1,000 or imprisonment for up to one year for a first offense. Each subsequent offense will be punishable by a fine of not less than $5,000 and imprisonment in a jail or house of correction for not more than five years.

SECTION 9. Adds two members to the Homeless Animal Prevention and Care Advisory Board, one officer from a local police department and one officer from a humane society. SECTION 10. Creates a nine-member commission to conduct a systematic review of the laws pertaining to animal abuse and welfare, with the intent of assessing the adequacy, effectiveness, and necessity of these laws, many of which date back to the late 19th and early 20th centuries and have not been updated in decades. The commission will consist of:

• the Attorney General or a designee;

• the Colonel of the Massachusetts State Police or a designee;

• the Commissioner of the Massachusetts Department of Agricultural Resources or a designee;

• the President of the Massachusetts District Attorneys Association or a designee;

• the President of the Massachusetts Farm Bureau Federation or a designee;

• 1 representative from the Massachusetts Bar Association; and

The commission will report back to the Legislature with its findings and legislative recommendations within 90 days of the bill’s passage, including any potential changes which would improve the state’s ability to deter abuse and neglect and promote animal welfare.