By Tom Duggan on January 30, 2013Comments Off on Lantigua Pays Fines for Campaign Finance Violations 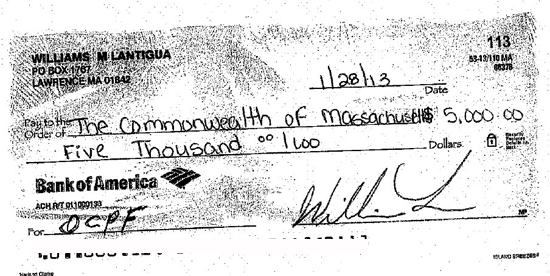 Lawrence Mayor William Lantigua has paid his debt to the Massachusetts Office of Campaign Finance (OCPF) to the tune of $5,000.

Lantigua made the payment Wednesday January 30, 2013 after cashing out $5,000 from a personal Ameriprise investment account, transferring the money to his personal checking account, and then wrote a check to OCPF clearing up his debt with the State Agency after being fined for refusing to file his campaign finance reports going back to 2010.

Attorney General Martha Coakley had filed suit against Lantigua for refusing to file his reports after Lantigua told them that he would not disclose his campaign donations and expenditures unless law enforcement officials guaranteed he would not be criminally prosecuted for the information he disclosed.

Sources close to Lantigua say that recent Eagle Tribune reports about Lantigua purposely concealing campaign finance information regarding his December 28th fund raiser were “bogus” because Lantigua had yet to receive a bill for the expenses he incurred that night (including the hall rental at Rio Nightclub) until after the OCPF reports were due.

“He didn’t get the bill for Rio until after he filled out the report,” our source said. “now he has paid his filed his reports, paid his bill and this should be the end of it.”

Documents obtained by The Valley Patriot show that Lantigua also included a letter to the State’s Office of Campaign Finances with his personal  check:

“Enclosed is a check drawn on my personal funds in the amount of $5,000 in payment of the civil late filing penalty imposed pursuant to MGL c. 55 Section 3. also enclosed are additional documents demonstrating that this check came from my personal funds.  As you know, I have personally filed with your office both the 2011 year end report as well as the 2012 report.

I believe that this fulfills all my current obligations  to your office under applicable law, and further fulfills any obligations I may have with respect to the civil lawsuit filed against me and Ana Soto by the Commonwealth in Suffolk Superior Court, C.A. No. 13-0090B. I trust that this will bring this matter to a satisfactory conclusion. Thank you for your continued courtesy and cooperation, and please contact me immediately if you have any questions or concerns.”