By Tom Duggan on July 19, 2015Comments Off on Lantigua Puppet Modesto Maldonado Must Go! ~ Paying Attention with Tom Duggan 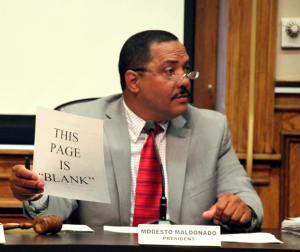 Now that his pal Willie Lantigua is out of office, you will hardly find another politician in Lawrence as slick and sleazy as City Council President Modesto Maldonado. Maldonado was a part of the Lantigua machine. His job in that span of four years on the council was to advance Lantigua’s agenda and attack anyone who protested the corruption of the Lantigua administration.

When Lantigua spent $10,000 on curtains for his office, illegally shipped garbage trucks and ambulances to the Dominican Republic, called for a $35M bailout loan from the state, laid off cops and firefighters, illegally laid off city workers and then filled their jobs, gave his family jobs in the school department and accused firefighters of lighting fires… well Modesto was not only in on all of that, he helped Lantigua orchestrate most of it.

Maldonado is not only a Lantigua puppet, he is also taking over as the lead warrior in Lantigua’s race wars in Lawrence. He often taunts white voters at public meetings with assertions that “there are two Lawrences, the racist white South Lawrence in Mount Vernon, and the real Lawrence, the Latino Lawrence.”

Maldonado recently spoke at a forum at Saint Mary’s, which was held in Spanish only. There, Modesto spear headed an effort to get Lawrence citizens (and non citizens) to support the “Safe Act”… a benign sounding name for letting illegal aliens get valid driver’s licenses in Massachusetts.

At a public meeting over the Hispanic Week event in South Lawrence this year, he accused the neighbors of being racist for asking about the city’s plan for increased traffic, and lack of parking around the South Common.

Worst of all is Maldonado’s efforts to make Lawrence a “sanctuary city”, meaning that he wants to stop the Lawrence Police from cooperating with federal immigration authorities when they arrest violent felons who are here illegally. Apparently, Maldonado doesn’t care about the out of control crime problem in Lawrence. Maybe that’s because he’s part of it.

NO CONFIDENCE IN RIVERA

In the last two years Modesto has meddled with personnel issues at city hall, interfered with the Rivera administration at every turn, and has been cited multiple times by state officials for holding illegal meetings.
Sound familiar?

But here’s the best part. With such a corrupt history as Maldonado’s, he actually supported removing Mayor Rivera from office with a recall petition, and has twice voted “no confidence” in Rivera’s ability to lead the city. And that kind of says it all doesn’t it? Modesto Maldonado had complete confidence in Willie Lantigua and has no confidence in his successor. Maybe that’s because Maldonado identifies more with Willie Lantigua than he does with Rivera. Birds of a feather, they say.

The voters of Lawrence have a chance this year to finish the job they started in 2009, when they rejected the corruption and racism of the Lantigua political machine. It does no good to have Lantigua out of office if his puppets on the council are still causing chaos and sabotaging the Rivera administration, in the hopes Lantigua will be able to mount a come-back in two years.

Modesto Maldonado needs to meet the same fate as his puppet master Willie Lantigua. Otherwise, Lantigua will continue to control the city council behind the scenes, and Lawrence will continue to decline.