By Tom Duggan on November 27, 2012Comments Off on Lantigua Takes Medical Benefits, Will Terminate Hero Firefighter

Lawrence Mayor William Lantigua has scheduled a termination hearing for Lawrence Firefighter Tim Atwood on Wednesday, claiming he is incapable of doing the job duties required of all firefighters.

Atwood was injured in the line of duty back in January, when his doctor says that diesel fumes from the South Broadway fire station (Ladder 4) caused lung damage and breathing problems, making it impossible for him to fight fires. Atwood initially said he did not want to go out on disability, but wanted instead to be reassigned to “fire alarm” (answering phones and doing other light firefighting duties.)

“They didn’t want to make a reasonable accommodation, and at first, put me in for disability and early retirement. It was strange. I didn’t want to get paid to stay home, there are things I can still do on the fire department and I wanted to keep working,” Atwood says.

But Mayor Lantigua and his administration not only denied Atwood the transfer to Fire Alarm to accommodate his illness, he forced Atwood to use his sick and vacation time while he ran out the clock, scheduling and canceling hearing after hearing till Atwood’s accrued benefit time ran out.

“First they say I can’t transfer, as they wanted to get rid of me with disability and early retirement. Fine, under the Heart and Lung Act they could have put me on disability and then early retirement. I would rather work in some capacity as a firefighter but if that’s not what they wanted to do, I have to pay my mortgage and I have three kids so what choice do I have?” 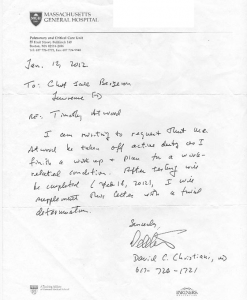 But Atwood says what happened next was nothing short of amazing.

The City of Lawrence stopped Atwood’s paycheck and stopped paying his medical insurance, forcing him to go on unemployment and file for MassHealth so he could get medical treatment for his lung problems.

“I don’t get it, I really don’t,” a despondent Atwood said.

“There’s a Deputy Police Chief who was indicted and he is still getting paid. I’m injured, I have letters from Doctors saying I can do light duty, and I want to work. But, they take away my benefits, stop my paycheck before I’m even fired, force me onto MassHealth, send me a bill and now they are trying to fire me saying I cannot do any job duties as a firefighter. Is this how we treat firefighters who put their lives on the line? I mean, I live in Lawrence. I have all my life. I served my country and when I came out of the service I chose to serve my community. This is the thanks I get?”

A History of Service and Putting his Life on the Line

He has been awarded The Peacetime Army Accommodation Medal, The Army Achievement Medal, The Navy Achievement  Medal, and both the Army and Navy Good Conduct Medals. He had been stationed in Korea and Panama and was honorably discharged.

He became a Lawrence Firefighter in 2004.

“I took the test, passed all the physicals and was deemed physically fit by the city to do the job when they hired me,” Atwood tells the Valley Patriot. “And I have been doing that job for the last nine years.”

But Atwood says that a problem at the South Broadway fire station caused him lung problems because the fire apparatus at the Ladder 4 station was not properly hooked up to a primal vent at the time.

“We need the primal vents in the station for the diesel fumes. I had been feeling sick at work a lot and had scheduled a doctor’s appointment, but the night before my appointment I had worked a 24 hour shift and was having hard time breathing. My Acting Lieutenant told me I should call the deputy and request to go home, but I had an appointment in Boston right after my shift, so I went to the appointment instead.”

That day, Atwood’s doctor wrote a note to Fire Chief Bergeron saying he was injured in the line of duty, automatically making him eligible for 111F disability benefits. But the Lantigua administration decided to fire him instead.

“I have all the medical documents. I did everything that was required of me. They kept making me go back to doctors, scheduling hearings and then canceling them, and all the while making me use up all of my accrued time (sick and vacation).”

“I don’t know who I pissed off, or what is going on behind the scenes but, this isn’t right.  It just isn’t right. I have kids. I have a mortgage. And after my years of service they basically are throwing me out into the streets and saying, ‘screw you.’”

Atwood says, to add insult to injury,  the city is claiming on the one hand that he can’t work as a dispatcher at Fire Alarm on Bodwell Street (doing light duty), but on the other hand, Chief Bergeron sent Atwood a letter saying that if he resigned as a firefighter he could be hired back as a civilian dispatcher at the same facility, (doing the same job with fewer benefits and a major reduction in pay).

Documents obtained by the Valley Patriot back Atwood’s claim of lung problems, disability eligibility and the runaround he has received at the hands of the Lantigua administration.

“At first I wanted to work,” Atwood says.

“I didn’t want to collect a check for not working, I can answer phones, there are things I can do on the department but they won’t let me. If they give me ILD benefits, the law says they will have to put me on early retirement and they just don’t want to do that.”

“Why can’t the mayor say to the fire chief  ‘put him at fire alarm’ and then this whole thing will be over? They are paying indicted cops to stay home but they don’t want to pay me to work? It’s almost surreal! I can’t believe this is happening.”

Atwood will stand before a hearing officer chosen by Mayor Lantigua on Wednesday morning at 10am, in City Council Chambers on Common Street in Lawrence.

The Valley Patriot will post a full report after Wednesday’s hearing.