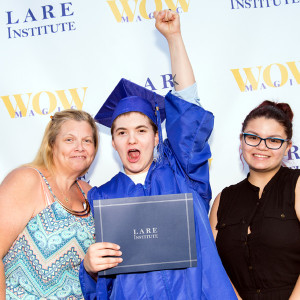 All eyes were on the sky as a plane circled overhead at the LARE Institute graduation celebration on June 16th. Students started snapping pictures of the message it was carrying, “Congrats 2016 LARE Grads! #WOW!Magic!”

That was the kickoff for the celebration. Students were fitted for caps and gowns, lined up in order of their programs of study, and “Pomp and Circumstance” began to play. More than 100 students proudly marched in, waving to family members, smiling at friends, as they made their way to the front of the tent.

The graduation, held at LARE Institute’s Andover location, featured four students speakers with varying stories of how they arrived at LARE Institute, but all with the same ending; that they left LARE with a job and a second family in the colleagues and fellow students of the school.

“LARE is like home,” said student speaker Denise Moses. “They let you know that once you’re a part of LARE, you’re always a part of LARE.”

Denise, who is now working as a CNA and a Home Health Aide, arrived at the school seeking her HiSET, formerly known as GED. She had dropped out of high school to pursue a boxing career, and though that career had flourished, she found herself wanting more.

She told her fellow graduates that though she had been turned down by many schools that told her she wasn’t smart enough to earn her HiSET, she persevered. She enrolled at LARE and passed with a perfect score. She’s now enrolled in LPN preparation courses with the goal of becoming an RN.

Another student speaker, Marva Gooding, shared about of her years of work in administrative positions before a layoff made her take another look at her skill set. She decided to bolster it by enrolling in LARE’s MS Office program. During her time in the program, she lost her only son. “It devastated me,” she said.

But like Denise, she persevered. With the support from her LARE family, she was able to continue her education. “They reached out to encourage and gently nudge me forward,” she said. Marva is now working as a Client Advocate at Learn Your Options.

Tanysha Hughes, another student speaker, arrived at LARE after what she described as “the worst year of my life.” She enrolled in the Medical Assisting program, in search of a better future for herself and her three boys.

“Let your kids be your motivation and inspiration as to why you will succeed and accomplish your goals,” she told her fellow graduates. Tanysha earned three certifications while at LARE and is now working as a Certified Medical Assistant in Methuen.

Michael Gary was the only other tudent to speak at the graduation. The 52-year-old single father told of how he had come from a time when people worked for one company their entire lives. After graduating from high school in 1980, he started working for a local food service vendor. Twenty-one years later, they closed.

He moved on to a local yogurt plant, working there for 14 years before it, too, closed. He decided he needed a change in careers and enrolled in LARE’s Pharmacy Technician program. “I had a family to support, 17 weeks of classes, and 6 weeks of externship,” he said. “I told myself, ‘I can do this’.”

He juggled his Dad duties with homework, paying the bills, making dinner, and folding the laundry, and ultimately earned his certification and a job offer at the end of his externship. He’s now working at Preferred Pharmacy Solutions as a Certified Pharmacy Technician.

“We are never too old to take on risks and learn new things,” he said to the crowd.

Vice President and Director of LARE Institute Sheryl Scannell and her colleagues beamed as they looked out over the sea of familiar faces. “Witnessing the students celebrate their accomplishments with their families and friends was a rewarding experience for me and all the LARE colleagues,” said Scannell.

Before they presented students with their certificates, American Training President and CEO Tom Connors addressed the crowd. He told them to have an attitude of gratitude and to value, highly value their families, friends, and faith. He closed congratulating them on their accomplishments. “When you’re looking in the mirror,” he said, “see someone who is proud.”