By ValleyPatriot on February 11, 2013Comments Off on Lawmakers File Bill to Retain In-State Tuition Benefits for Citizens and Legal Residents 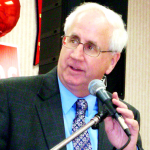 The Lyons-Lombardo bill reserves taxpayer subsidized in-state tuition at institutions of higher education to citizens and legal permanent residents, who are also residents of Massachusetts. This bill more precisely stipulates the intent of a vote in the House of Representatives taken in January, 2006. At that time, an overwhelming bipartisan majority of 96 – 57 voted in favor of providing such valuable taxpayer-funded benefits to residents who established citizenship or legal status.

“This is an issue of fundamental fairness,” said Representative Lyons. “Our taxpaying citizens are working hard to play by the rules. Those who follow the rules should not be forced to subsidize those who break the rules.”

“It’s time for someone to stand up for the struggling taxpayers who pay for these valuable student subsidies,” added Representative Lombardo. “Rep Lyons and I will continue our work on Beacon Hill to promote fairness for all citizens and taxpayers.”

The two Merrimack Valley legislators said that the bill was necessary because Gov. Deval Patrick is arbitrarily overturning the clear will of voters and legislators. On November 19, 2012, the Patrick Administration unilaterally issued a directive ordering the Board of Higher Education to mandate taxpayer-funded in-state tuition subsidies for some persons who lack legal status to reside in the Massachusetts or the United States.

“Working families,” Lyons emphasized, “are having a difficult enough time in this slowed-down economy. They should not be burdened with subsidizing higher education for anyone who refuses to abide by residency and citizenship requirements.”

“At this very moment,” Lombardo elaborated, “the Patrick Administration is demanding a 19% income tax hike on hard-working people. If taxpayer resources are so scarce, how does the governor justify this reckless misuse of our precious tax dollars?”

Lyons and Lombardo pledged to continue their advocacy on behalf of families who play by the rules and pay the tax bills that fund state government.