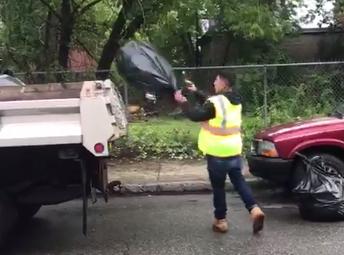 Lawrence City Council candidate Francisco Paulino says he is so sick of the special favors City Councilor Estella Reyes has been getting with her property on Haverhill St. that he had to show people so they could see for themselves.

On Tuesday, Paulino got word that Lawrence DPW workers were cleaning Councilor Reyes’ property while on city time and using city equipment. Paulino showed up at the scene on Lebanon St. behind the Haverhil Street property owned by Reyes.

Paulino took to Facebook to live podcast his arrival and confrontation with the DPW workers, catching them in the act.

As Paulino started broadcasting city workers can be seen doing work, one worker concealing his identity with his hand when he saw Paulino recording.

Paulino captures at least two city vehicles, and a city worker taking garbage bags from the side of the Reyes property, throwing them into the city truck. As Paulino narrates in Spanish, saying that this was the property of his opponent Estella Reyes, he is confronted by a DPW worker.

“This property is owned by a city councilor, this is private property and she is supposed to pay for the cleanup, not the city.”

The DPW worker insisted that it was city property and said he was putting his “employees at risk picking up needles here.”

Shortly after the video was shared on the Valley Patriot Facebook page, Lawrence Mayor Dan Rivera issued a public statement.

“Today a group of DPW workers cleaned a parcel of land that is owned privately and that a city official has an interest in. The request to clean 2 different city owned lots next to it came from my office after getting many requests from neighbors to clean the city’s lots on that street.

The foreman on the job today although he knew that the last lot was privately owned, allowed them to do the work anyway. Given his experience and connection to the city he knows that city workers are not to do work on Private property. He will be disciplined. The owner of the lot will be contacted to make some type of restitution for services provided even though they had no idea the city workers were cleaning their lot.

The city policy is and always has been that no city worker is to do work on private property.

Thanks for your understanding!”

The Valley Patriot has learned that the disciplined city employee is Joel Chalas who was suspended for five days.

Francisco Paulino said this is the reason he is running against Estella Reyes for city council.

“Look at everything going on with that property. The system is supposed to be fair. She is not there to help the city, she is there to help herself. She shouldn’t be on the council.”